Sticky to showcase original music at Mahall’s on Saturday, Nov. 23 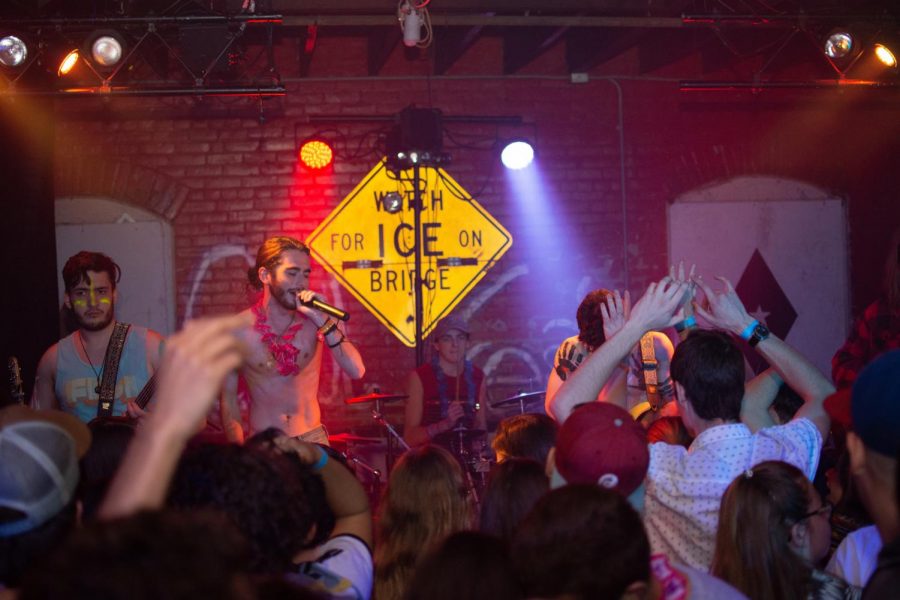 Sticky began, like many Case Western Reserve University bands, as something created for the yearly Battle of the Bands contest. Four Phi Gamma Delta (Fiji) brothers and one former brother came together two weeks before the event at the Jolly Scholar in January 2018 to try to earn a bid at Springfest. They won, and unlike many college bands that fizzle out or only come together to play at school functions and house parties, Sticky is becoming a regional force.

Their concert at the Grog Shop on Saturday, Nov. 16, showed the fruits of Sticky’s efforts to gain a reputation in the Cleveland music scene. The band performed as part of Autumn Uproar with seven other bands.

The show marked an important landmark for the band, their first set performing only original music. Sticky excels at creating energy through crowd interaction, with lead singer and fourth-year student Nick Charles engaging in witty banter with the audience.

“Take off your shirt,” yelled the Grog Shop.

“It’s not time yet,” replied Charles before eventually relenting and exposing his bare chest. Then, Charles, like a young Iggy Pop, jumped around the stage before resting on the mic stand and cradling the mic like a newborn baby.

Sticky’s stylistic DNA comes mainly from alternative rock bands from the 1990s and 2000s. Their songwriting has added finesse as the band has learned each other’s musical personalities, adding dynamic shifts, pauses and breakdowns to their breakneck pop-punk sound. They even had the most elusive of things at a rock show, a bass solo.

“We still give him some curveballs, though,” replied Jacknow.

“It’s more like I have an idea for a song, let’s write it together and bring it together as a unit,” said Charles. “Instead of it being someone’s song that we are playing.”

At a rehearsal on Monday, Nov. 18 at The Outpost, a horse barn-turned-car garage, turned concert venue behind the Fiji house, the band’s adaptable approach to songwriting was demonstrated through an hour-long workshop of a new song.

Though a lot of their songs have blunt lyrics about emotions, relationships and escapism, the song they were working on with the tentative title “Glass Box,” written by guitarist and third-year student Conor Clark, featured a poetic finesse with figurative language and metaphor. Clark came up with the idea for the song while driving to work, and once he arrived, he spent an hour writing the lyrics.

“It’s about the growth of a relationship, how you work with what you’ve got but are limited by your own reality and your own hopes,” said Clark.

“Most of our songs come from some super strong emotion from one of us,” said Charles. “We all try to feel what that person is feeling and connect with it.”

Though the song is quite personal for Clark, focusing on his parent’s divorce, Jacknow and Craffey wrote the music after Clark sent the band his lyrics. Craffey took the lead vocal using a spoken-word cadence inspired by Arkansas-based band Listener, while Charles sang harmony. Craffey is a self-taught vocalist, with a more rugged style than Charles, whose vocal technique has been honed by years of vocal lessons.

“Nick had his voice trained,” said Craffey. “He had voice lessons for many, many years. I just one day decided I wanted to sing.”

The presence of two lead singers, along with the chemistry of Sticky’s instrumentalists, creates a cohesive unit that can subtly alter their style to fit the mood of a song, for a band, that is greater than the sum of its parts.

Sticky is performing at Mahall’s on Saturday, Nov. 23 with Westown Bend, Subtle Q and Indré. Doors open at 7 p.m., tickets cost $10 for adults and $12 for minors under 21.