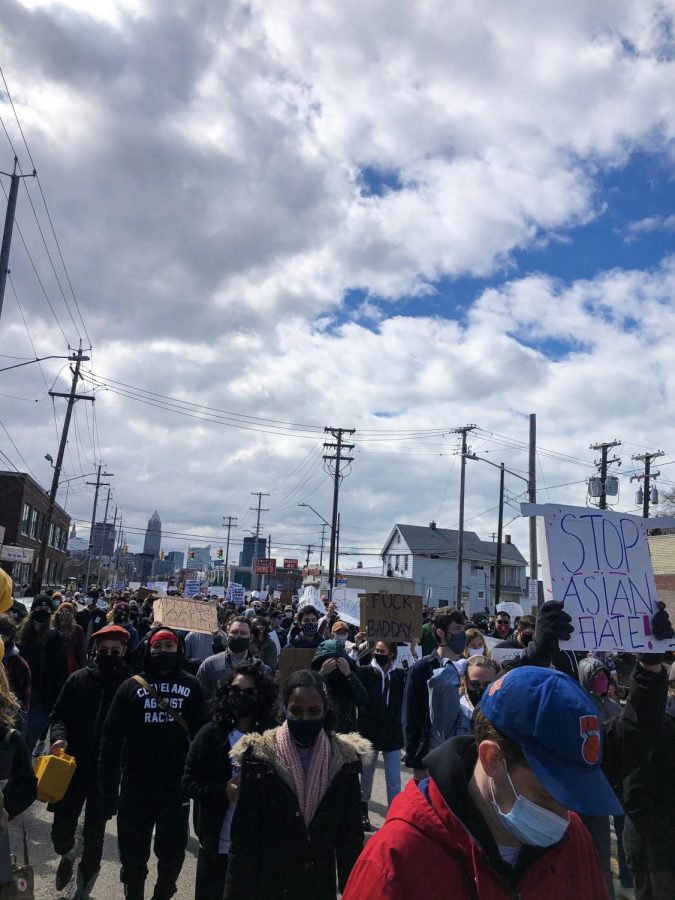 Clevelanders march to end violence and racism against Asian Americans.

After the horrific shooting in Atlanta earlier this month, a new national spotlight has shown upon an issue that has been long ignored: the growing spread of anti-Asian violence. With six of the eight victims of the shooting women of Asian descent, there has been an increased focus on rising racist sentiments against the community. A shocking video or news story seems to come out on a weekly basis, showcasing some new act of brutality, with over 4000 such cases in the past year alone. The COVID-19 pandemic has especially strained racial tensions as many try to make Asian Americans a scapegoat for the virus.

In light of all the recent events, a rally and march was held in the AsiaTown neighborhood of Cleveland on March 28 to show solidarity with the community and to demand an end to anti-Asian rhetoric and violence. Organized by community organizations such as AsiaTown Cleveland, Ohio Progressive Asian Women’s Leadership (OPAWL), Asian Services In Action and the Organization of Chinese Americans (OCA), among others, the event served as a place for grieving, as well as a reflection on the amount of work needing to be done. While Asian Americans have been lauded as “model minorities,” many of the organizers have aimed to show the issues facing the community, from hate crimes to the misogyny and over-sexualization that Asian women are particularly subjected to.

The rally, held across the street from a former location of a Dave’s Grocery Store, included a moment of silence for victims of the Atlanta shooting as well as speeches from various community organizers and activists, many of which centered around making Asian voices more prominent in national discourse, as well as calling attention to the different experiences Asian women have had. Most of the 12 speakers were, in fact, women.

One such speaker was Xinyuan Cui, an AsiaTown community organizer, who gave her speech in English and Mandarin, proclaiming: “When white supremacy makes us invisible, we need to stand for each other to see each other and fight for each other. The winter will be over. May liberation come.”

Among those attending for the speeches and the march were candidates for this year’s upcoming mayoral election such as local non-profit founder Justin Bibb and former city councilman Zack Reed. Nina Turner, who is running for recently appointed Secretary of Housing and Urban Development Marcia Fudge’s vacated congressional seat later this year in a special election, was also present. Notably, current mayor Frank Jackson was not present, and his absence was pointed out at various points in the event. Other issues brought up in speeches were the violence Asian elders in particular face, as well as the general tendency of the community to not speak up when faced with discrimination.

Asian Americans in Cleveland, along with allies in support, made their voices loud with over 1000 people coming to march through the neighborhood, chanting slogans and holding up signs that said phrases like “Immigrants are welcome here” and “Don’t wait ‘til I’m a hashtag.”

As more attention is drawn to the issue, governmental responses are slowly building, with the Cleveland City Council passing an emergency resolution condemning racism, xenophobia and hate crimes “especially against Asians and Asian American Pacific Islanders during this pandemic.” President Joe Biden announced this week new initiatives within the White House and the Justice Department to confront anti-Asian hate.

At Case Western Reserve University, the Undergraduate Student Government (USG) recently put out a statement in support of Asian Americans, as well as announcing a CWRU Asian Pacific Islander Desi Americans (APIDA) Task Force, stating: “We must continuously educate ourselves so that we can speak up and uplift our friends within the APIDA community. We must continually work to shape a truly inclusive and welcoming environment, both at CWRU and beyond.”