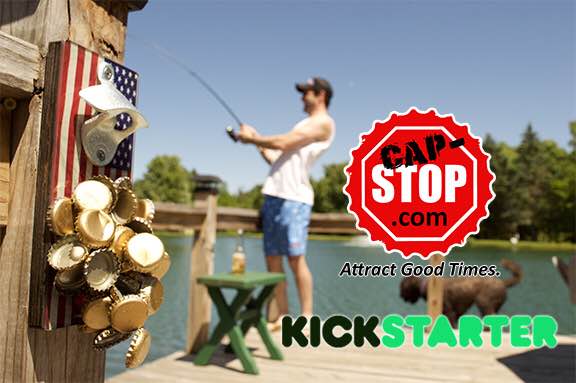 Ever tried to use a bottle opener before? Ever had to deal with the caps scattered everywhere after having a drink? Brian Tighe, a Master of Business Administration candidate at Case Western Reserve University, did and he didn’t like the cap situation.

He and his friends enjoyed fishing at their dock, and “the caps kept falling to the ground and the water, so it’s kind of a problem,” he said. As a gift to his friend who built the dock, he made a special bottle opener, the prototype of Cap-Stop, with a magnet hammered below the opener part, catching the cap as it falls down.

People were immediately attracted to his idea and demand for his invention soared. “Next thing you know, we are in one retail shop, and then we expanded it into over 20 retail shops, and we are at a bunch of professional sports stadiums,” Tighe said.

As his business kept growing, Tighe felt the need to develop the online shop and invest in the customization of Cap-Stop. And that’s where the Kickstarter comes in. Kickstarter, an online crowdfunding platform focused on creativity, will allow Tighe to build up enough inventory to carry out their online demand. His goal for the Kickstarter campaign is $75,000, which is going to help him to fulfill online orders in a day or two instead of weeks, as the situation is now. Customization is one of the key features of his online shop. There is no minimal order required, allowing everyone to make his or her personalized cap-stop. Tighe is also thinking about sharing some of the customer designs they have made, because “it’s amazing what people come up with.”

Tighe’s project is made possible also with help from LaunchNET, CWRU’s entrepreneurship incubator. Tighe first got to know LaunchNET when Gene Sasso, the program manager of LaunchNET, introduced it in his marketing class. “I’ve always known that Case has a really strong entrepreneur spirit”, Tighe said and as soon as he started working with LaunchNET, he knew it was the right fit. It helped him with his marketing and planning, including preparing for this Kickstarter campaign.

As stated on the Cap-Stop website, the magnets Tighe and his team are making do not just want to attract beer caps but also “attract good times.”