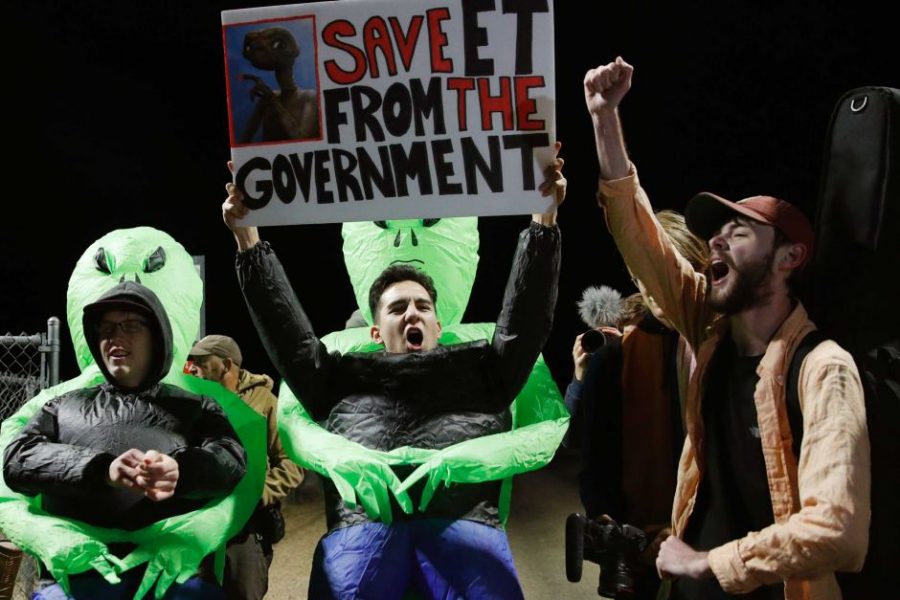 "Storm Area 51" started as a Facebook meme event with 3.5 million people marked as interested. Only 150 actually showed up.

Area 51, a U.S. Air Force flight testing facility in southern Nevada, has been the centerpiece of many conspiracy theories about extraterrestrial life. Founded at President Eisenhower’s behest in the 1950s, Area 51 has since served as the home for assembly, testing and deployment of U.S. surveillance technology—which explains some of the secrecy surrounding the base. Area 51 was first formally acknowledged by the government in 2013, with a wave of declassified documents.

An interview in 1989 by Bob Lazar helped cement early rumors that Area 51 was connected to alien activities. Lazar, who claimed to have worked in Area 51, swore that military scientists and officials within Area 51 had captured extraterrestrials and were examining them and their technology. Later inquiry into Lazar’s background brought his authority to speak about Area 51 into question. Lazar is believed (in a tale spread by the government) to have forged university degrees and lied about where he worked. The first rumors about Area 51 began approximately ten years prior to Lazar’s interview.

Although claims that Area 51 houses aliens are only vaguely backed with evidence, pop culture and the media have wholeheartedly embraced the notion of a secret extraterrestrial testing facility in Nevada. Popular film franchises such as “Independence Day,” “The X-Files” and the History Channel’s “Area 51 Cover Up” all perpetuate the rumors.

These types of media portrayals are what encouraged Matty Roberts, a college student from California, to create the Facebook event “Storm Area 51, They Can’t Stop All of Us,” on June 27.

By Sept. 20, the proposed date of the raid, over 3.5 million people had responded that they were either “going” or “interested.” For the three months prior to the event, the internet was rife with Area 51 memes. Memes about Naruto running past bullets, Kyle drinking Monster Energy drinks, escaping Area 51 with profound alien knowledge, not being able to go, livestreaming the event, “clapping alien cheeks” and actually attending, chronicled the massive enthusiasm that persisted throughout the lead-up to the raid.

After the several months of hype, the actual events of the Area 51 raid disappointed many. Only about 150 people showed up to the gates of Area 51. No one raided the base, and there were only two arrests: one for public urination, and one for trespassing. About 40 people showed up at 3 a.m. on Friday, but were dispersed peacefully by local sheriffs.

Jonathan Qiu, a second-year student, had low expectations for the event, but was still hopeful something might come of it.

“I was really interested to see how it would all play out,” Qiu noted. “I didn’t think anybody would actually raid it.”

Second-year Bradley Deamer was also never particularly optimistic that the raid would be successful.

“People honestly took what the internet was saying seriously, and they shouldn’t have been surprised when nothing happened,” said Deamer.

Deamer cautioned that the mainstream internet tends to take jokes like this a long way, but does not go through with them in real life.

“That’s just how the internet works,” according to Deamer.

Part of the reason the raid garnered so little participation may have been due to attempts by Roberts and government officials to stop it. After the Facebook event went viral and the FBI spoke to Roberts, Roberts began to stress that the event was not created seriously.

In an interview for the BBC, Roberts said, “[The raid] was totally a joke from the get-go.”

Roberts participated in organizing two separate festivals catered to potential Area 51 raiders who wanted to interact with people similarly interested in aliens, without the danger of actually raiding a U.S. military base. Roberts began planning Alienstock, hosted by the Little A’Le’Inn hotel, but later separated himself from that event. He then advised people to attend the Storm Area 51 Basecamp event, held at the Alien Research Center. About 1,500 people combined attended these festivals.

Qiu believes that even though the event failed to live up to the hype, it still shed light into the societal climate social media has created.

“Even though the raid didn’t actually happen, I feel like this thing speaks volumes to what our culture is and how influential memes and social media have become to be able to stir something like this,” Qiu said.

Qiu further explained that this was a significant event for the internet and that it highlights the often overlooked, ability of the internet to bring people together.

“This was the first time the internet has managed to gather a bunch of people from all over the world together, and the fact that most of them sat together and made friends with one another shows how a simple joke from any guy sitting at their computer could stir such a global response.”