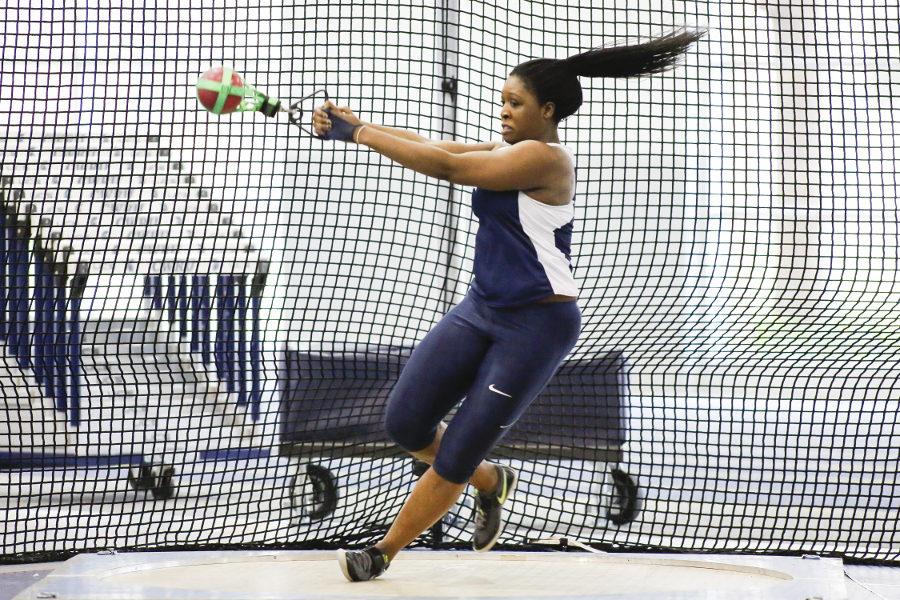 Fourth-year thrower Temi Omilabu in the midst of a hammer throw earlier this season. The Spartans placed third in their Marv Frye Invitational this weekend.

On Sunday both the men’s and women’s track and field teams finished third out of nine teams with exactly 104 points at the Marv Frye Invitational at Ohio Wesleyan.

Leading the throwers, Laios placed third in both shot put and discus. In shot put, she reached a distance of 11.60 meters, while in discus she reached 37.98 meters, placing her second in the University Athletic Association (UAA). Carroll performed well in both running and throwing events. She finished third in the javelin throw with a distance of 31.65 meters and eighth in the 100-meter dash with a time of 16.80 seconds.

In jumps, the Spartans were led by first-year student Ananth Suresh and fourth-year student Jared Brucker. Both finished third-place in their events in both the meet and the UAA overall. Suresh finished 13.01 meters in triple jump, and Brucker cleared 4.24 meters in pole vault. Fourth-year student Spencer Boyd placed fourth in the conference rankings by clearing 1.86 meters in the high jump.

Leading the runners were third-year students Nathaniel Wahner and Galen Caldwell. On the 400-meter hurdles, Wahner finished fourth in both the meet and conference with a time of 58.10 seconds. Caldwell finished third in the 1,500 meter run with a time of 4:08.22.

The next meet for the Spartans will be back at Ohio Wesleyan for the All-Ohio Championships on Saturday.