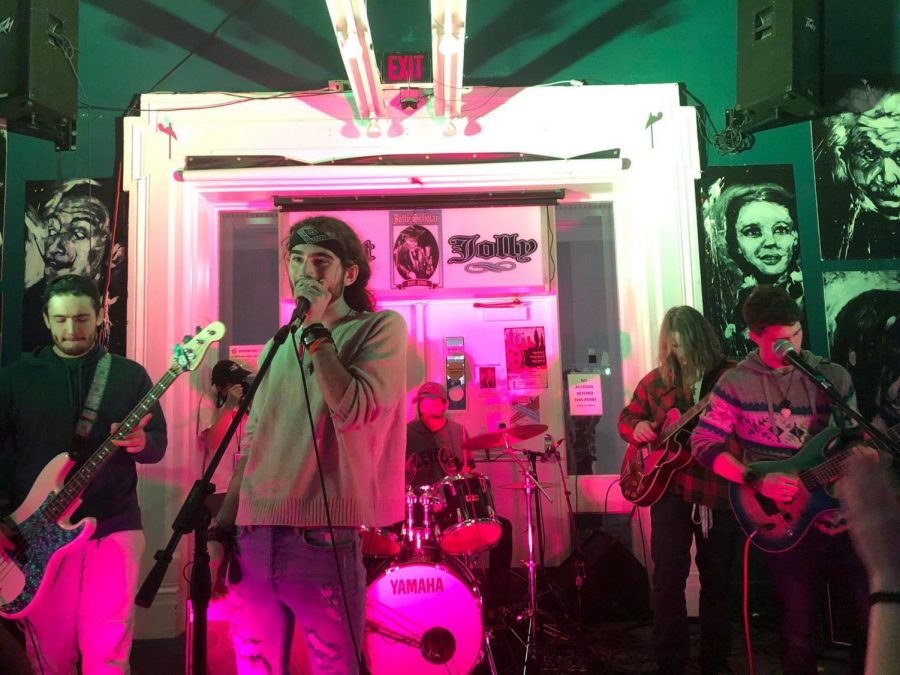 Sticky the band at Battle of the Bands last month.

University Program Board’s (UPB) potato prank on April 1 was only the first of many events planned for this month. UPB recently announced the headliners for this year’s Springfest: MadeinTYO, Echosmith and Coast Modern. Another familiar name on the list is sticky the band, the band that won Battle of the Bands, which was held at the Jolly Scholar on Feb. 23.

Although the members played together whenever they could since last semester, sticky was only formed a few weeks before Battle of the Bands.

“We had always talked about forming a band but didn’t really have a reason to until Battle of the Bands,” Pukansky said.

The name sticky comes from Charles’ nickname as a pledge for Phi Gamma Delta (Fiji). Although the nickname didn’t stick when he became a brother, Pukansky, who attended the same high school as Charles, brought it back when he visited Case Western Reserve University as a prospective student.

When the four fraternity brothers were looking for a name for their band, sticky seemed to be the obvious choice.

Being in a band isn’t a new experience for most of sticky’s members. Both Charles and Pukansky have played in rock bands in the past, and Jacknow was part of a progressive metal band.

“Playing around with a new beat and being able to lock eyes with the guys and having everyone else fall in line is a great feeling,” Craffey said.

Since their establishment, members of sticky have been practicing two to three times per week.

“I love being with my [fraternity] brothers because there’s a connection further than words can explain. We are in sync without having to verbally express our feelings,” Pukansky said.

Sticky has already written several original songs and performed many covers. Pukansky’s favorite is their version of “Hurt” by Johnny Cash.

Their music has been well-received. “sticky always delivers an exciting and engaging performance every time I’ve gotten to see them play,” second-year student Kate Haering said. “Even though they’re relatively new to the Case [Western Reserve University] music scene, they’ve already made huge waves, and I’m looking forward to seeing them at Springfest.”

Band members are optimistic about the future, even if they don’t make it big. “Hopefully we’ll find jobs in the same area and can still play shows consistently,” Pukansky said.

The band has already been booked for shows in addition to opening for Springfest. They recently played for PastryNow’s launch party on March 23. The student-founded start-up company is a delivery service for freshly baked goods.

The band will also be performing at Fiji Islander Fest on April 19 and Carlton Road Block Party on April 26 and has a show booked for May 22 at the Grog Shop.