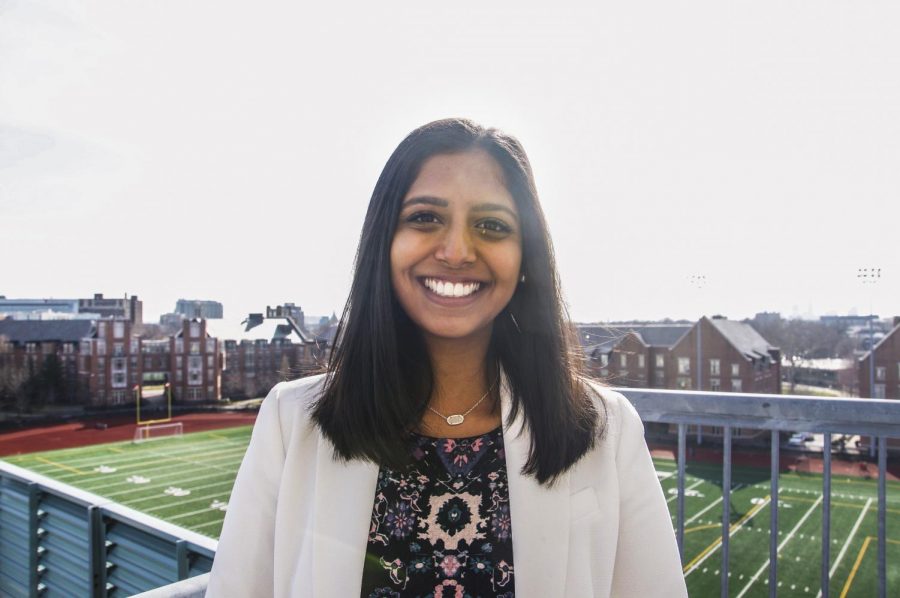 She hopes to “steer the organization in a positive direction over the course of the [2018-2019 academic] year.”

Rao was a participant in her high school’s student government program and noted that her acceptance letter to Case Western Reserve University encouraged her to join USG. Taking the suggestion into consideration, her experience with USG began when she was elected first-year representative during first-year elections

Her second year, she became USG Treasurer, and this year, Rao served as the Vice President of Finance.

“With each of these roles, I was able to gain a greater understanding of the inner workings of USG and of the University,” she said.

Rao is a champion when it comes to addressing an issue, finding a solution and implementing an effective strategy. While serving as treasurer, she collaborated with the Undergraduate Diversity Collaborative (UDC), the Residential Hall Association (RHA), the Flora Stone Mather Center for Women (CFW) and other members of USG to write Resolution 26-02, “Access to Free Menstrual Health Products.” The legislation ultimately increased the accessibility of menstrual and sexual health products for the CWRU community by placing dispensers in the majority of campus restrooms.

She also attributed her most recent activity as the vice president of finance for setting her up with the credentials necessary for taking on the role of USG President.

“Serving [as the vice president of finance] in particular equipped me with the skills I needed to grow as a leader,” she said, ”such as making connections with administrators and students, organizing and running meetings, empowering representatives to complete initiatives and learning how to effectively handle conflict.”

The new president hopes to establish more open networks of communication, which she believes will promote mechanisms to enhance internal and external USG relations.

“My hope is that we will be able to address more student concerns, as well as wrap up a few long-term initiatives over the course of this upcoming year,” she said. “By equipping representatives and vice presidents with the tools they need to succeed, I believe we can make strong progress on both small- and large-scale initiatives and enact beneficial change on campus.”

Among her top priorities as president include carrying out the Diversity & Inclusion Committee’s university-wide disability audit initiative, creating an “Org Leader-centered feedback mechanism” and increasing accessibility of General Assembly meetings in terms of location and content. Rao said the projects will involve a great deal of collaboration between USG committees, which she thinks will increase the body’s overall efficiency.

Wellness is another one of her focal points, which she said the University has also expressed its commitment to. The newly instituted wellness director position and consideration of more academic flexibility in the Commission on the Undergraduate Experience (CUE) report acknowledge this aspect, but Rao hopes to tackle the problem through the governing body which she now leads.

“One thing I think that needs further addressing is student burnout and stress,” she said. “[Although] we are making strides towards addressing physical and mental wellbeing, I believe this needs to be coupled with academic changes that reduce workload to allow students to explore their interests and improve their personal wellness.”

Rao credited previous USG President Ivy Petsinger, who will graduate this May, for teaching her important lessons on leadership. She praised Petsinger’s “immense positivity and kindness,” and admired her supportive and empowering attitude towards USG members.

“Ivy was always very good about handling unexpected situations with grace and flexibility,” she said. “She has always advised me to see the bright side in any situation and from her, I’ve learned what it means to be a leader: sometimes stepping up, sometimes stepping back and observing when other voices need to be heard.”

“[Rao’s] outstanding leadership skills, commitment to [USG] and ability to balance everything she does astounds me,” said Petsinger. “I look forward to seeing all of the accomplishments in the coming year and where USG is going to go under Maya’s leadership.”

Rao’s inauguration took place on April 24, along with that of other USG representatives and Executive Committee members.