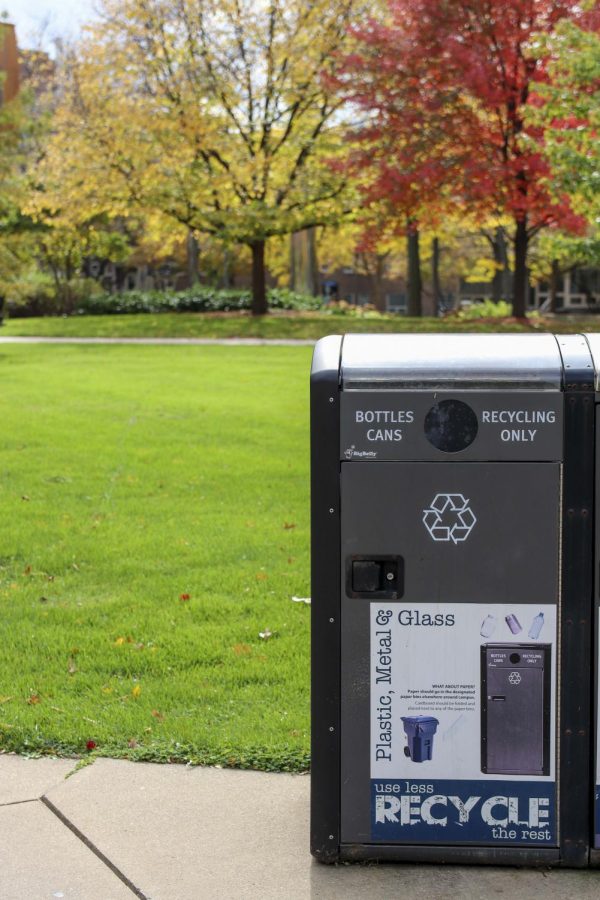 A recycling bin on the main quad. The Student Sustainability Council is working to create a campus culture of sustainability with other student organizations.

Student Sustainability Council (SSC) is wrapping up its Students Encouraging Environmental Dedication (SEED) beta program this semester. The SEED program aims to foster a culture of sustainability among student organizations and the student body. Three Undergraduate Student Government (USG) recognized organizations: CWRUcio, Humanitarian Design Corps (HDC) and Women In Science and Engineering Roundtable (WISER) participated in the beta program over the past year.

Second-year student Leo Ndiaye is the chair of the SEED Program. He explained that the reason these three groups were chosen was because SSC wanted representation of the diverse organizations on campus. According to Ndiaye, HDC focuses on engineering, CWRUcio hosts both large events like the Yule Ball and regular practices and WISER did more volunteering. Working with these groups gave SSC a rough idea of a good approach for different kinds of events.

The beta test revealed quite a few potential problems. SSC created micro-grantsーa way for student groups to make more sustainable purchasesーof up to $50 a semester for the SEED groups, yet none of the three beta groups requested any grants. SSC is thinking of ways to make the micro-grant more easily accessible for participating groups.

Ndiaye suggested the possibility of working with the USG Finance Committee in the funding process.

“We’re trying to involve the USG more,” said Ndiaye. “At our last meeting, when we were trying to figure out how we can improve micro-grants, we invited Maya Rao, the Vice President of Finance for USG. She gave us some insights on how micro-grants could be more effective and possible ways of structuring USG Finance itself to be more conducive to sustainability. So possibly we could make it so if groups are submitting their budget to USG … [if they have a sustainable aspect in their purchase], they get a higher priority than other groups.”

Another setback for the beta program is that WISER dropped out due to their faculty advisor leaving Case Western Reserve University. There were some communication issues between the sustainability officer and the members who came to presentations. However, Ndiaye thinks this is not completely a bad thing.

“We want to see how groups can handle the rigor of the program,” he said.

Thinking back to the beta test, Ndiaye believes it would be beneficial to have more communication with the SEED organizations.

“We could have been a bit more communicative with them,” he said. “I think we had tried to take a very hands-off approach and let them be more flexible in their engagement in the program. I think in the next semester we want to be more on top of them and bugging them about filling out the point checklist and stuff.”

Ndiaye is expecting a wider range of interests from organizations; however, they may not be able to take everyone yet.

“Because we’re launching the program for the first time … it won’t necessarily be at the best capacity in terms of leadership,” he said. “It might be a lot for them [those running the program] to take 20 groups and try to manage all those. So we’ll probably start smaller initially.”

“We’re expecting to work with Interfraternity Congress (IFC) and Panhellenic Council (PHC) to see whether Greek Life can be sustainability-certified,” said Ndiaye. “IFC and PHC will probably join as SEED orgs in the launch of the program. So they will act as role models for fraternities and sororities.”

“SSC’s program has potential to transform the mindsets of those planning events on our campus as all of us have different areas we can improve,” said Dollinger. “That is one of the greatest strengths of the SEED program, that it can be personalized for each student organization no matter what kind of events you host or resources you utilize. We should all be mindful of the resources we are given. I’m grateful to SSC for their help in cultivating CWRUcio’s mindfulness in sustainability and for their work emphasizing its importance to the campus community.”

The goal of the SEED program is to have the entire USG roster of groups certified. Ndiaye is hoping to achieve that by adding more and more groups to the program every year. This is important not just because it will reduce carbon emissions, but mostly because it will raise awareness on sustainability.

“There’s no student support behind these [university-level sustainability] resolutions because people don’t know about sustainability,” he said. “They haven’t really been informed and they don’t participate meaningfully … It’s really important that we educate people on campus so that they are more committed to larger scale sustainability changes.”