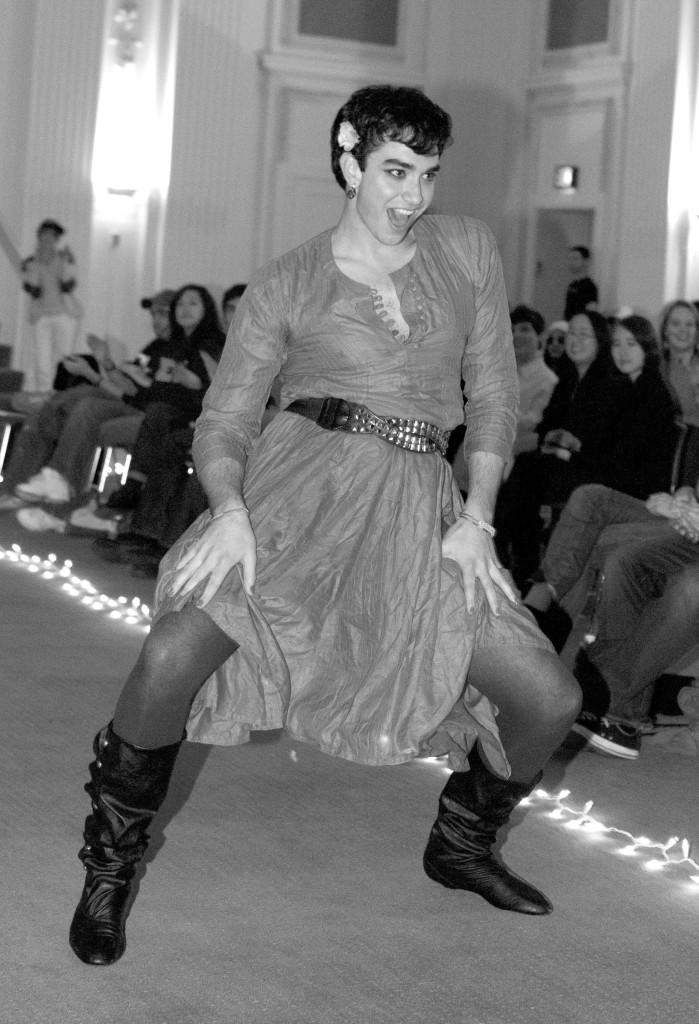 Closing a weekend of LGBT awareness, the annual Drag Ball took place on Saturday, Nov. 13, 2010 in the Thwing Ballroom. People came in wearing all sorts of drag – from the modest to the outrageous.

The origin of drag, as many don’t know, was actually from Athens, Greece in the fourth century B.C. as it served as a common form of punishment for those that chose to be nonconforming to gender roles. Over time, the connotation of the word has changed to fit a new form of positive expression and a celebration of tolerance. By 1941, it had later evolved more to what we have today in our drag queens and kings, in where the more popular of which, the queens, helped re-coin the term as “dressed as a girl” got shorted to “drag.”

Brennon Ham, the host of the show, introduced this concept to the crowd before the show began, and then quickly started off with the drag kings. While the drag kings were tremendously outnumbered by the queens, they were still amazing in their own right, though as one has to admit, it was much harder for them to step outside the social norm, as baggy jeans and t-shirts are much closer to a unisex outfit than dresses are.

The queens, however, were fabulous and truly put a ton of effort into the show. All the performers lip-synced to a song of their choice and danced for the crowd. From the “Kitty Sex Panther” to Esperanza to Margarita Mila (who was dancing, supposedly, to pay off her tuition at Case), all the acts were entertaining and well thought out.

Throughout the show, the participants also played a number of games. Ham explained, saying that, “The games are supposed to serve as fun and help engage the audience. We get to have [the crowd] challenge norms all around!” Without letting the crowd know what they were getting into, random volunteers were chosen and asked to play.

The first, of course, was to show people that they should be comfortable with their bodies – by switching clothes with a random partner. The second game involved slightly less nudity with a game of reverse leap frog, and the third required the volunteers to perform lap dances for the hosts. “We also get people comfortable with seeing sexuality and a gender expression that is different from their own,” Ham comments.

“The Drag Ball has happened for 8 years now,” says Shane Jeffers, the co-president of Spectrum. “It strives to increase awareness for the LGBT community, as well as to attempt to break down the gender binary that so many people cling to and expect others to follow as well.”

Ham further added that, “The Drag Ball is a way for people to express themselves and challenge gender norms in a safe and friendly space.” But that’s not all that the ball does. It also raises money for charity, in which this year, 100% of the proceeds – estimated to be about a grand – will be going to the AIDS Taskforce of Greater Cleveland.

Though the event appeared to be disorganized at some points, it was worth it to see the kings and queens perform. There was an adequate supply of food and the crowd seemed genuinely impressed with most of the drag queens and kings’ performances.

“My favorite part was seeing each of the performers get out there and get super nervous at first. Then the audience would clap and they’d get a renewed sense of confidence. It’s like a condensed process of social acceptance. It’s really cute,” said Ham.

Jeffers agreed, saying, “I enjoy when the crowd seems really into it and we know people are going to remember it, so that next time they see a boy in a dress, they might not think it is so strange.”