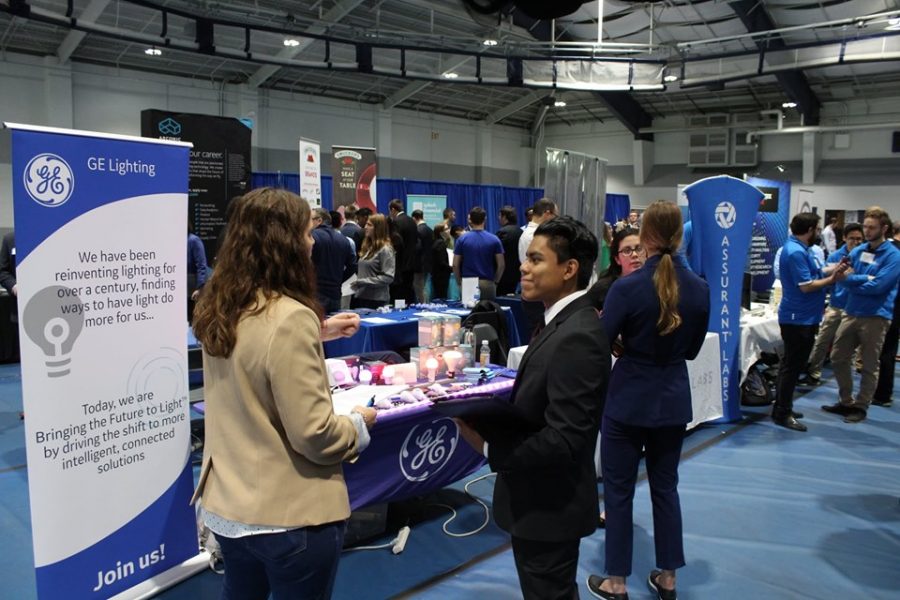 Students utilized the opportunity to talk to potential employers at the annual career fair.

On Thursday Oct. 3, dozens of employers set up tables in the Tinkham Veale University Center for students to come talk to recruiters about everything from general opportunities to internships, to even full-time positions. Hundreds of students flocked to the venue, eager to take advantage of this opportunity.

As she power walked into Tink for the career fair, interview ready, Grace Schaller listened to Lizzo’s “Truth Hurts.” As a third-year, she felt more confident having already applied to internships and connected with business via Handshake, a website for Case Western Reserve University students to contact local employers. She described herself as a “wreck” last year, not knowing where to go or what to wear. This year, she wore a smile and said, “I’m ready.”

Max Barnett, a third-year studying electrical engineering, listened to “Tonight, Tonight” by Hot Chelle Rae on his way to the career fair. He pumped himself up, going over his plan. He also utilized Handshake to pick out nine companies he was interested in. With 12 copies of his resume in hand, he was ready. Barnet says his philosophy going in was “when it comes down to it, I care what it is. But—I care more that I have a job.”

Matthew Sefcik, the police officer that stood at the entrance to the arena, noted, “The students seem[ed] a little nervous, but they also seem[ed] prepared and ready.” Sefcik appeared to be correct, as all of the Wēpa printers on the Quad had run out of paper, presumably from all of the resumes being printed for Thursday. Some students found themselves walking all the way to Kelvin Smith Library to find a printer. But in the end, most students managed to come prepared.

Jason Vanderpool, a recruiter at Goodyear, confirmed this. He said the company keeps coming back to CWRU year after year because of the qualified candidates they find here. In fact, most of Goodyear’s new employees are found at career fairs, including Vanderpool himself. Now, standing in the place of the interviewer, Vanderpool’s best piece of advice is “Just be yourself, the more personal you are, the more easy the conversation is. You can be as technically smart as you can be, but if you aren’t personal it’s hard to work with someone.”

Standing in line to interview at Rockwell Automation, Joseph Broady, a second-year mechanical engineering major, tried to channel this advice as he smiled and prepared himself. Even though he is only a second-year, this was his third job fair. Prior to the event, the career center had gone over his resume, he had already contacted companies online and he had talked to previous interns. However, he is ready with not only his experience and resume, but also with a positive attitude and a goal, “Just be myself.”

After all the anticipation of updating resumes, contacting companies online and preparing for interviews, students walked out of the fair having had the opportunity to talk to seven companies.

As Andrew Engelmeyer, a third-year chemical engineering major and business management minor, said, there is a small feeling of relief, but an even larger realization that “There is more work to be done.”