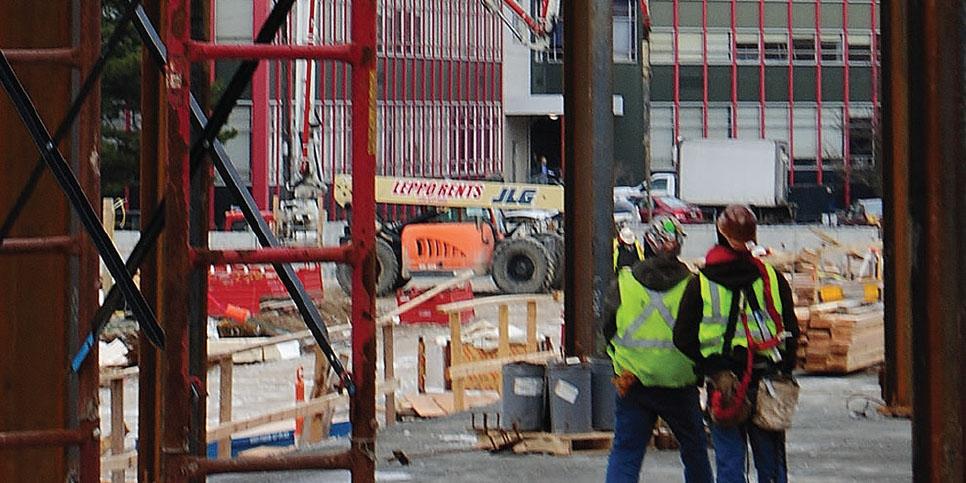 The patch of land behind Thwing Center has seemingly changed overnight from a grassy plot to a building foundation to a building framework.  The new Tinkham Veale University Center is well on its way to becoming a part of the campus.

On Jan. 29, a group of Case Western Reserve University students met with consultants from Unique Venues to discuss ideas about the center.  Some students who were involved in the meeting had hoped it would have occurred earlier in the planning and building process.

“It would have been nicer if we were more involved,” said Gabriella Chandra, president of the class of 2014 in the Class Officer Collective.  “Right now, the building is already planned.”

However, other students agreed that this meeting stimulated a necessary discussion about the future of this new building on campus.

“The focus of this meeting was to talk about building operations and usage, not design, and I was happy that students had an opportunity to comment on these important issues,” said Randall Toy, president of the Graduate Student Senate.

CWRU administration aims for the new center to be a building for both students and the greater campus and local communities.  Opening the building to the community will help to alleviate some concerns about how the building will be paid for, particularly because no student organization will be charged room fees, with the possible exception of the new center’s ballroom.

“As a graduate student, I was happy to hear that student fees would not be used to fund the University Center,” said Toy.  “A system which would charge room usage fees may deter graduate students and small student groups from holding events in the university center.”

“The university center should be a place where students want to meet, spend time, and hold events.  I hope that administrative barriers and fees will not prevent this from happening.”

In addition to offering students and community members spaces to gather, the building is to feature a significant amount of new technology.

“They really put an emphasis on the new technology in the university center,” said Chandra.  “They mentioned features like new projectors, screens, and bigger ad boards.  I hope this large amount of technology will help to keep the building alive.”

While new technology is a boon to the new university center, there is always a concern of security, both for the students and for the technology within the building.

“I hope they will be able to balance their security, to make the building safe but accessible,” said Chandra.

Students may also find they have several other reasons to go to the Tinkham Veale University Center.  The building will house several student-group offices, provide jobs for student workers, and offer new dining options, in addition to a bar.

“I think that this will help to make the university center unique if they can engage with all programs,” said Paul Mannix, founder of CWRU Capital.  “They really hope to make this a university hub.”

One concern students voiced at the meeting pertained to the future of Thwing Center.  However, the university plans to utilize Thwing in conjunction with the new center.

“Thwing has a lot of useful student meeting spaces and can serve as an alternative place for students to hold events,” said Toy.  “Students can continue to use Thwing, even with the presence of the university center.”

In the end, the students who went to the meeting agreed they were looking forward to seeing what would come of the new university center.

“I think it has potential if they use their resources correctly,” said Chandra.

“From what I have seen, the building has a great modern look and appears to be very welcoming.  I definitely would check it out,” said Toy.  “The building has a lot of potential.  It depends a lot on how it will be run, if students will be maintained as a priority, and what events and programming will be held there.  I would like to see students [be] the top priority in the planning and usage of the building.”