Students protest the end of DACA 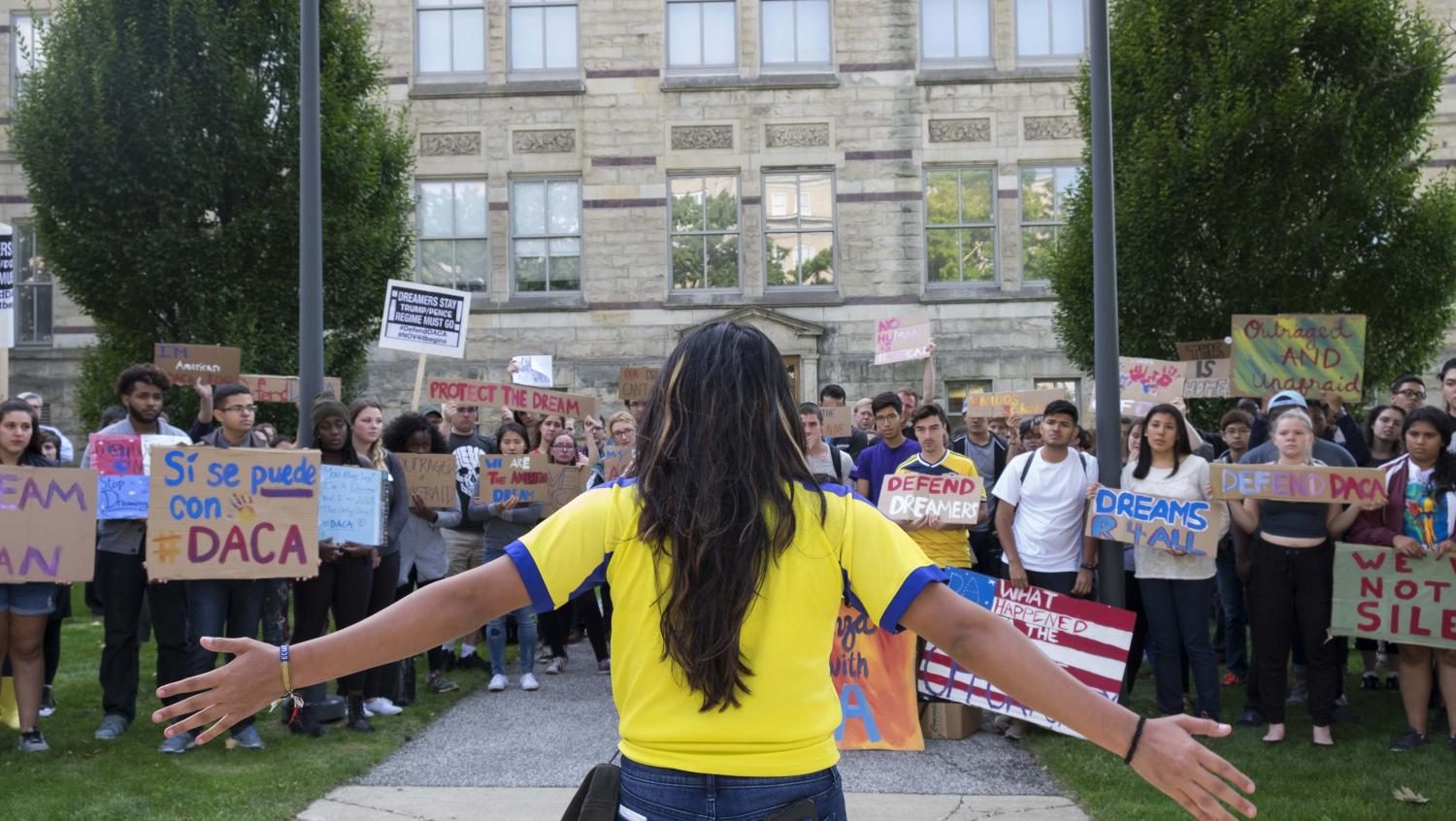 The DACA program, providing legal resience to undocumented immigrant youth for up to two years, was repealed earlier this week. CWRU administration has come out in support of DACA.

In 2012, President Obama’s administration enacted the Deferred Action for Childhood Arrivals program. The immigration policy allows people who had entered the United States illegally as children to receive two year stays from deportation.

Proponents of the program were bipartisan and from a variety of backgrounds. Nearly all agreed that it was the practical implementation of an American ideal: Children should not be punished for their parents’ crimes.

The Trump administration announced earlier this week that the program will be phased out in six months. At the end of this period, more than 800,000 young people living in the United States, many of whom immigrated as very young children and therefore have only lived in this country, will face deportation.

Some of those people are students at Case Western Reserve University. President Barbara Snyder sent a campus-wide email just a few hours after the Justice Department announced the end of the program. Snyder hit two points at the top of her email: that “Dreamers are welcome here” and that “[CWRU] oppose[s] ending DACA, and will urge members of Congress to continue the program in the strongest possible terms.”

Those who would benefit from the program are often referred to as “Dreamers,” since they would have benefited from the previously proposed DREAM Act, which was not passed by congress.

On Monday night five members of La Alianza, a Latino student organization on campus, began planning to protest the impending DACA removal announcement. The group planned the rally entirely by themselves, which included creating a public Facebook event that resulted in the demonstration reaching a larger than anticipated audience.

“The event was public on Facebook and quickly we saw that many organizations were sharing it…and so we knew there was a potential for others to put this out there and invite media to be present,” she explained. “It just so happened that when we were coming to set up—we came here—and there was already a news station set up and ready so we [thought], alright this is going to be big.”

This interview came after the main portion of the rally, when people broke into a march up and down the Binary Walkway, chanting in English and Spanish in support of those affected by the Trump administration’s decision.

Bernacet and fellow La Alianza member and rally leader Monserrath Salas led the continually growing crowd in bilingual cheers or stories of their parents, lives and the struggle of immigrating to a new country. The five different TV cameras set up on the sidewalk were mostly ignored by the group.

About three quarters of the way through the initial gathering, the group brought out a student from the audience who took the stage with a vengeance. Talking partly into a megaphone, but also loudly enough that the nearly 100 assembled were able to hear her anyway, the student made it clear that this was not an issue that would stay outside the CWRU bubble.

“The government doesn’t want us, but that’s ok.” She announced, to supportive cheering from the crowd. “We’ll fight back, like we’ve always done. And it’s hard and I know and it makes me want to cry, and I’m scared, but I will not stop there and I want you all to understand this is a real issue. I am not the only DACA student at this school. I know many others, and there will be many more to come.”

While the large crowd gathered in front of Adelbert Hall marked the first protest of the year, it was not the first involving a large number of CWRU students since Donald Trump was elected in November of last year.

As Cyrus Taylor, dean of the College of Arts and Sciences noted, it may not be the last.

“I’m afraid we’ll have more practice by and by,” the Dean said to the person next to him as chants were taught at the beginning of the demonstration. “We’ve got work to do.”