Students shack up for charity 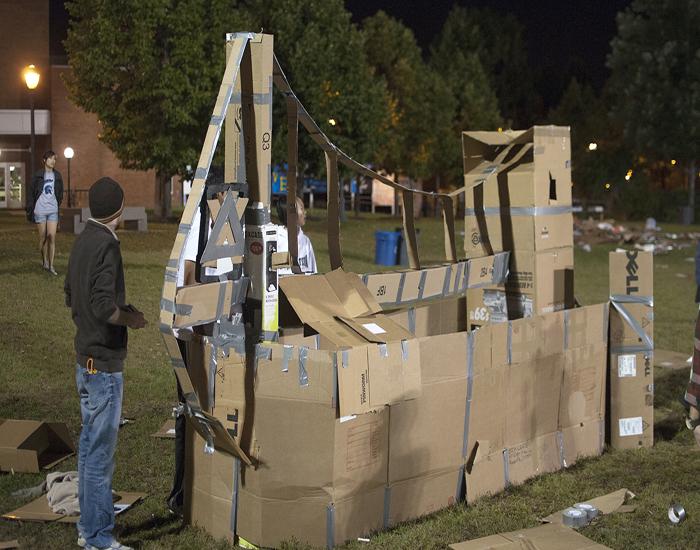 What happens when one introduces a mountain of old boxes to about 100 college students? The answer is Let’s Shack Up 2012. Last Friday, cardboard, creativity, and Case Western Reserve University students populated Adelbert Gymnasium to participate in Habitat for Humanity’s signature event. During Let’s Shack Up, students build shelters out of cardboard and duct tape. The event staff then judges the houses and Golden Hammers are awarded to the most creative shelters. Many students showed up to represent several Greek Life chapters and residence halls. Throughout the night, several groups performed for the students. The CWRU Dance Team, Dhamakapella, IMPROVment, Urban Elementz, Case Juggling Club, Speakeasy, and Voices of Glory all performed enthusiastically for the participants. The students started building their shelters at about 7 p.m. and the judging occurred at 11 p.m. Though all of the shelters were unique and creative, there were only three Golden Hammers to be awarded.

The winner of the Golden Hammer for Residence Life was Cutler House’s third floor team, which constructed a shelter resembling the house from the movie “Up.” The house was complete with an adventure book and balloons.

The winner of the Golden Hammer for Greek Life was Alpha Chi Omega sorority, with a castle complete with a drawbridge. Smith House took the Wild Card Golden Hammer with an innovative turtle design. When asked about the night, CWRU Habitat for Humanity president Megan Hach said that she felt that the event went well, despite the decreased attendance resulting from the threat of rain.

However, she was excited about the number of freshmen and Greek Life groups in attendance. In the end, though, Hach attributes the Let’s Shack Up’s success to the event chair. “Tyler Marotta did a great job planning the event,” said Hach. The event chair himself was happy with the event as well. Marotta felt that many of the houses were creative, and he praised the freshmen’s many unique ideas, such as the “Up” house. Ultimately, the event, which is Habitat for Humanity’s biggest fundraiser of the year, benefits the community. “Habitat for Humanity is happy to serve the Greater Cleveland community,” said Marotta. Habitat for Humanity has other events throughout the year, including Crush for Crush and an awareness week.