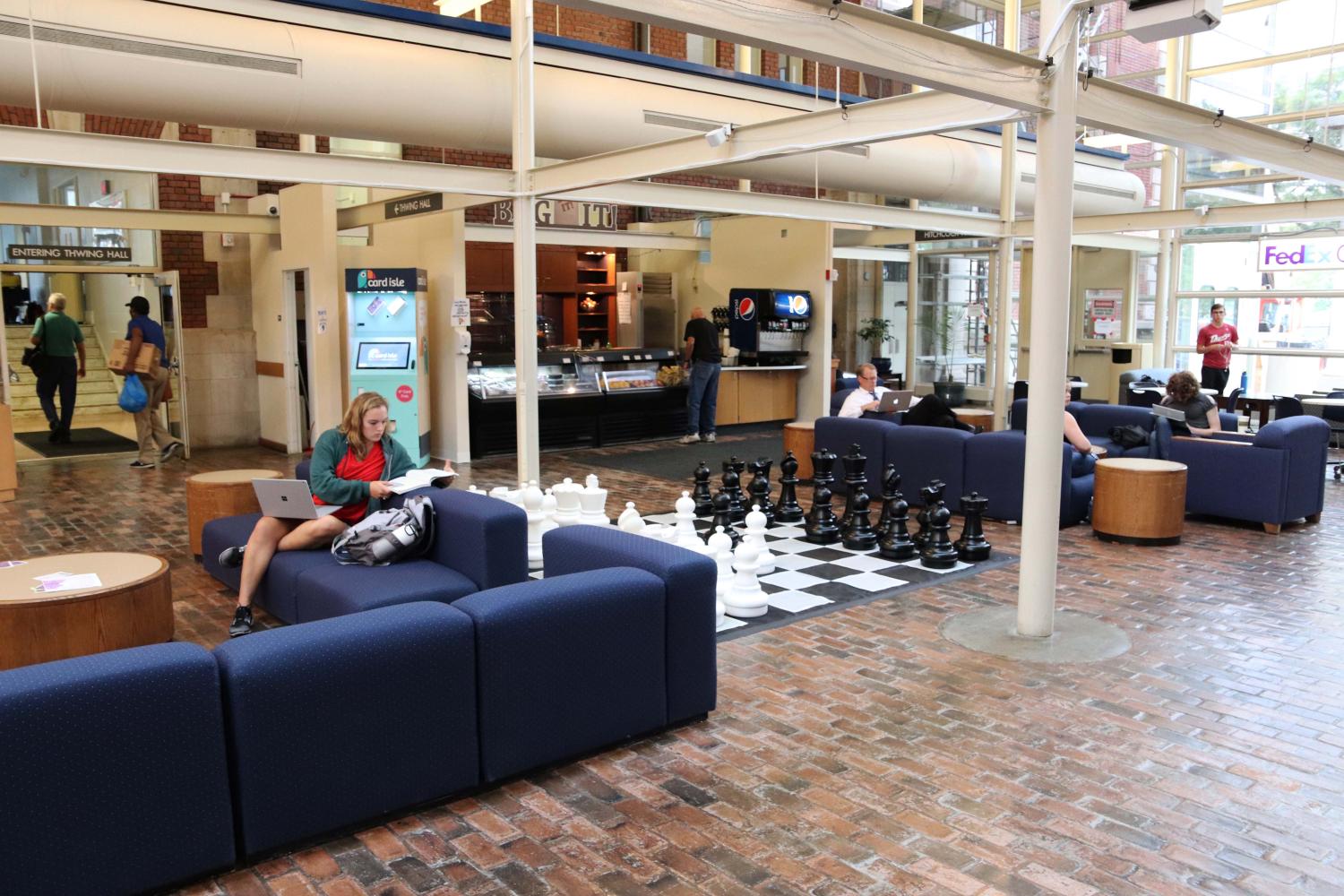 The Thwing Center underwent renovations this summer, resulting in a refurbished commuter lounge and a now-fancy ballroom.

One Saturday in the fall of 2016, a group of students came together to discuss and brainstorm their dream for Thwing Center. They began in daylight before lunch and ended in the dark well past dinnertime; throughout the meeting, they discussed countless points and took a large tour of public and restricted areas of Thwing.

By the end of the meeting, representatives from the member organizations of the Student Presidents’ Roundtable (SPR), along with key campus groups, had began to build on their student-focused vision for the building and the activities that are held in it. By the end of the semester, they would send in a version of that vision to administrators, who would approve it quickly.

Less than a year later, much of that proposal has become reality through renovations to the building over this past summer. An article published in the Sept. 8 issue of The Observer detailed these changes to Thwing, but didn’t tell the story of the student and staff that came together and stepped up to the challenge.

At the time, Thwing was in need of changes. Students were not allowed to dance on the weakened ballroom floor. UDC, which had been formed only two years prior, needed an office space; the group had been working out of a desk in the Tinkham Veale University Center before being offered the Spartan Room in the Spring of 2016.  They had been promised a space by Lou Stark, vice president of Student Affairs and Dennis Rupert, associate vice president for Operations & Planning within Student Affairs, along with Arlet Wright, director of Thwing Center.

The students and administrators that united

Meet the trio that “spearheaded” the initiative; JP. O’Hagan, then and now chair of UMB wrote much of the final proposal that was sent in. Lilly Tesfai, then president of UDC, was instrumental in making sure the ballroom’s renovation moved forward. They were joined by Andrew Dupuis, president of RHA.

The three are part of the Thwing Center Student Advisory Board, on which representatives from many of the SPR boards and umbrellas sit. This organization meets only a handful of times in the school year; instead, discussion and initiatives occurs in small working groups. In addition to the renovations this past summer, the group is responsible for the combined postal station and snacks desk installed in Thwing’s atrium two years ago.

The group began brainstorming ways to change the building in the Spring of 2016 before bringing the plan to the SPR in the following fall, less than one year ago.

“We had a goal of [fall break],” explained O’Hagan, noting the ambition of the original timeline. “…We sent it to administrators in mid November.”

O’Hagan pushed for the full SPR to meet and facilitated the discussion and tour of the building. That Saturday, they took the first step to make turn the Thwing Advisory Board’s vision into a proposal. At the end of the evening, the group had decided that the ballroom needed to be renovated—the hardwood needed to be replaced and the beams below reinforced—and that the offices of all student groups, along with the commuter lounge, would be moved to the east basement of Thwing.

Over the rest of the semester, O’Hagan, along with other two on the task force, worked on drafting and revising the proposal and presented it to the SPR multiple times. Eventually, they  agreed that only the UDC office—and storage room—would be created in Thwing’s basement, along with a student lounge. The space was occupied by a philosophy lab at the time. The commuter lounge would stay where it is currently located.

The proposal was sent to administrators. Weeks later, the trio and Caroline Gray, then and now chair of the SPR, received a request to attend a meeting near the end of final exams with Stark and Provost William Baeslack on Dec. 20.

“The provost seemed very on board with it and he really liked that students were behind it and they really wanted to see the history of CWRU preserved,” said Gray.

Gray and Tesfai were both surprised by how well the proposal was received.

Gray explained that the SPR had focused on two areas: “heart” and “home”. The SPR had declared Thwing as the heart of campus and the groups focus on the building stemmed from that decision. Garretson Oester became chair of the SPR in the spring of 2017 and joined initiative.

Compromise in funding the plan

The plan had been approved, but the trio along with the SPR had to make a choice regarding financing.

Tesfai prioritized the ballroom. She explained that Student Affairs had budgeted for renovating the room that’s now shared by the UDC office and the new student lounge.

She saw a vision for the building beyond just her organization’s needs.

She discussed her opinion with her peers and began working with Stark and Dennis Rupert from the Office of Student Affairs to instead use that funding to pay for the ballroom renovation.

Tesfai stipulated for giving up funding for the UDC office that students be involved in decisions regarding the ballroom and that other funding still be used to renovate the room that now holds the UDC office and student lounge. Rebecca Lowry, interior designer & project coordinator for Campus Planning, Design & Construction, designed the space and the ballroom with input from Tesfai and others.

The Commuter Lounge remained unfunded. Enter Oliver Westcott, president of the Commuter and Off-Campus Organization. Westcott lived in Chagrin Falls—up to an hour away depending on traffic—for the past two years but decided to move closer for his third-year; he now lives on Hessler Road, adjacent to campus.

Westcott explained that Arlet Wright used money from Thwing’s annual furniture sale to nearly completely refurbish the Commuter Lounge for only $5,000. Wright, along with Terri Geiger, Operations Coordinator, and Stephen Toth, Operations Manager for Thwing Center spent much of the summer searching for furniture and designing what the space now looks like.

O’Hagan, Tesfai and Dupuis have been asked to work on a three-year plan for the building and hope to complete that by the end of the current fall semester.