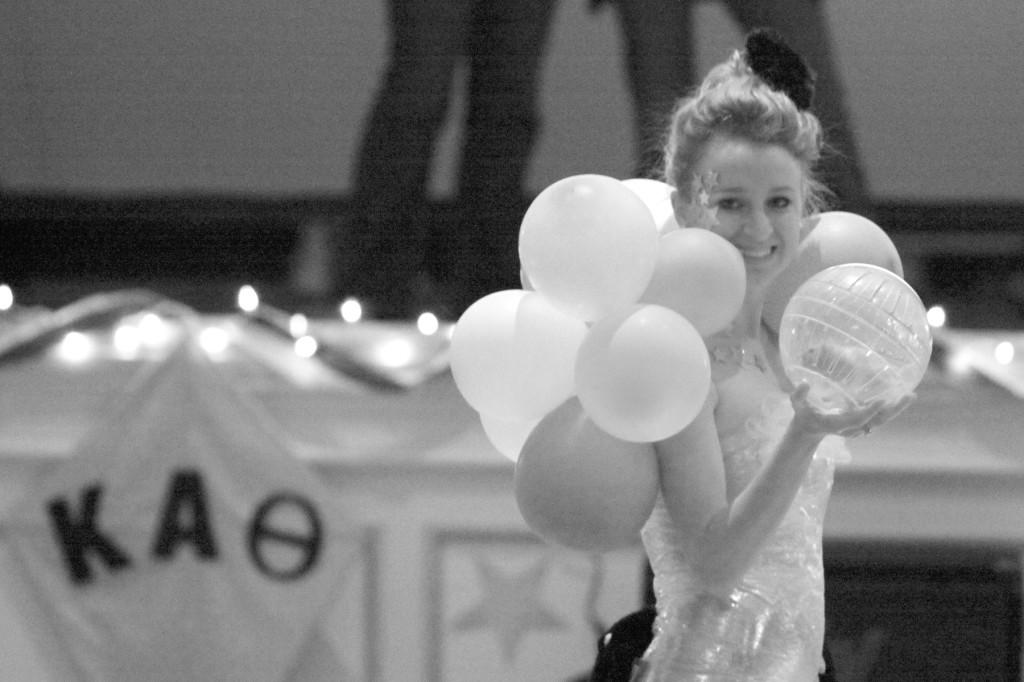 With over twenty participating groups, the event was a major success. The Thwing Ballroom was filled with students and adults alike, all prepared to view an outrageous and fun show of campus groups having a good time.

This year’s KATwalk had everything from each organization’s spirit wear to Case gear; green wear to Lady Gaga-esque outfits. The seemingly endless appearances made by variations of Lady Gaga stole the show in some of the most ridiculous costumes around.

Alpha Phi’s Gaga sported a live hamster accessory, Alpha Phi Omega’s had a shake weight and an outfit straight out of a Flinstones cartoon, and Sigma Nu introduced “Sir Gaga” to the Case community. Others included a “Lady Batman,” an all-black spandex Gaga that teased judges with a whip, and a caution tape-wrapped Gaga from Phi Kappa Tau.

Junior John Enevoldsen was Phi Kappa Tau’s Lady Gaga. When asked about his costume, he said, “Lady Gaga has been my inspiration since I was a wee pup. I listen to her music every day, partly because of the radio.”

Case wear was predominantly a stereotypical nerd, but some took it further than others. For example, Sigma Nu’s Eben Via donned the stereotypical vest and small khakis. However, after his “performance,” all he said was, “I appreciate getting naked at most sorority events.”

There were two notable exceptions; a phenomenal duct tape dress, Case logo and all, thanks to the Class Officer Collective, and a reincarnation of “fat guy with surfboard” by Sigma Alpha Mu, much to the audience’s approval.

Green wear was all over the place. Georgio Armani’s “green line” was introduced by Delta Upsilon, the next-to-nothing line was introduced by Zeta Beta Tau, and the men’s aluminum skirt line was introduced by FIJI. Captain Planet made appearances on behalf of both Sigma Phi Epsilon and Sigma Chi. There was even a dress made exclusively of the first issues of this year’s Observer presented by the sisters of Phi Mu.

Each organization sported their own spirit wear with pride and included heavily layered FIJI and Alpha Phi members who lost their layers on the catwalk, a Tron-esque duct tape Sigma Chi, and an appropriately anchor-sporting Delta Gamma sister.

KATwalk judge and Mathematics teacher, Chris Butler, commented on the event, “It’s wonderful. It’s lots of fun seeing the students having a good time for a great cause.” In response to being a first-time judge, he said, “I didn’t know what to expect…now I do!”

However, returning judge and Coordinator of First Year Residence Education, Karl Rishe, saw it differently, “Chris Butler is a huge liar. He wasn’t even at the event!” He added, “It was a good time for a great cause.”

First place went to the Class Officer Collective while Sigma Psi and Phi Delta Theta tied for second. Each team was pleased and deserved their distinction.

The student response was just as positive. ZBT Case wear participant Logan Stetzer said, “I thought it was fun seeing everyone get together goofing off.”

Phi Mu Case wear participant Kate Clancy said, “It was so much fun knowing I’m going to be goof and make a fool of myself.”

Philanthropy Chair and KATwalk event coordinator for Kappa Alpha Theta, Rachel Paul, said, “I think the event went really well. People got a lot more creative this year and I think there was more room to get creative because of the themes.” A lot of work went into planning the event according to Paul. “It was more work than I expected,” she said, “But it was definitely worth it.”