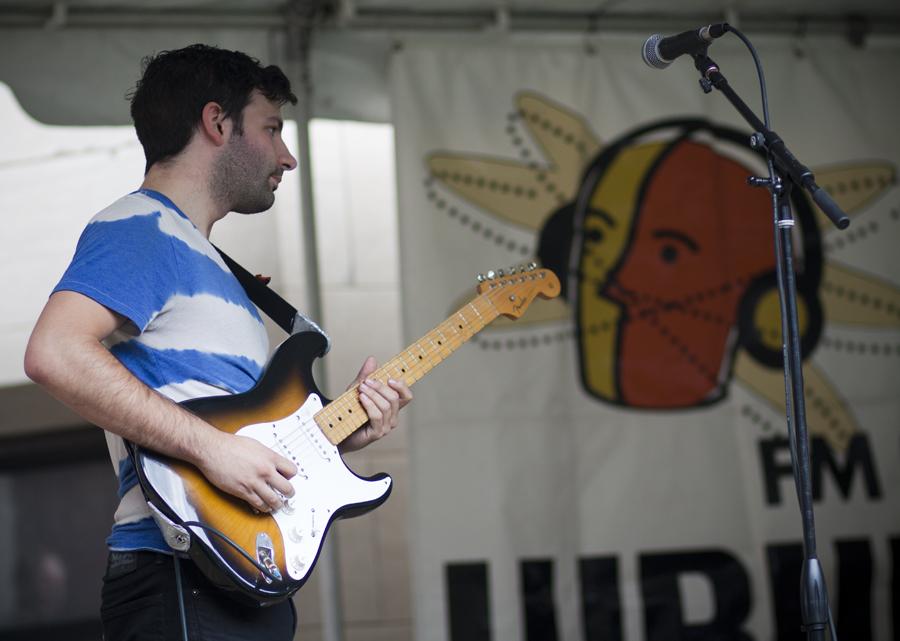 The guitarist of Wingtones began the daylong music festival around 1 p.m. on Sept. 8. Among other antics, Wingtones’ mascot Wingzilla graced the stage.

Spot Nights, the Homecoming concert and Springfest have all delved into pop, folk or rap and all of them have had fluctuating attendees (dependent on the genre), but Studio-A-Rama’s devoted fanbase has punk and rock lovers flocking to Mather Memorial courtyard every year.
CWRU alumni Arber Chang was involved with WRUW 91.1 FM, CWRU’S campus radio station, while he studied at Case. “Studio-A-Rama is something that everyone at the radio station looks forward to every year,” he said.

According to Chang, the live music outside of Mather Memorial courtyard is “lowkey and less hectic than a typical Case concert.”
Current CWRU student Melekte Melaku agrees. “There’s so much space for everyone to chill out or dance.”

Mather Memorial’s courtyard is usually just an empty grassy square, but every year, Studio-A-Rama’s host WRUW 91.1 FM brings everything needed for a festival, including a small stage, a fenced perimeter and a WRUW booth to recognize CWRU’s campus radio station. This year, Fired Up Taco Truck even made an extended appearance near the edge of the fences. “People are ordering a lot of food,” said truck worker Dan Tamayo. “It’s a good factor being here.”

Crowd members came and went throughout the 12-hour daylong local music festival, many of them not even students at CWRU.

Officer Tolliver, there to ensure safety at the event, said that Studio-A-Rama is “a different environment. It’s cool, it really is.”

Tolliver got just as excited as the audience for different performers. “They should let me up there to play the drums!” he said, tapping out imaginary drum beats in the air during Obnox’s heavy-rock performance.

A few standout performances included opener Wingtones, Tuk Peenersen & His Weinermen, Blaka Watra, Mirrors and headliner Mikal Cronin.
Wingtones rolled off the day at 1 p.m., with lyrical themes that centered around chicken wings. Yes… chicken wings. However, that wasn’t the strangest part to many of the audience members; CWRU alumni Andy Zolyak thought the weirdest aspect was Wingzilla, the mascot for Wingtones. “It was this guy in a chicken suit,” said Zolyak. “It was pretty amusing.”

Blaka Watra was a little less punky than some of the other performers with their smoother beat and emphasized vocal harmony. This more alternative band brought a calmer style to Studio-A-Rama’s lineup and a well-appreciated break from some of the heavier music.

In sharp contrast to that lighter, calmer alternative-styled music, Mirrors got up on stage with a seven-man set, rocking out their heavy punk signature style. The scratchy singing and yelling into the microphone reverberated off the courtyard, creating a loud chamber of punk that was broken up by bits of audience interaction, usually centered on weed or drugs.

Their second song, “Jaguar Ride,” carried a Californy guitar melody, but fell apart a couple of times and was a bit out of tune. The cohesiveness of the band was questionable, and this kind of thing happened during a few of their songs.

However, unlike some of the earlier performers at Studio-A, Mirrors had an excuse: it was their first time playing on the Mather Memorial stage in 38 years. The band had broken apart long ago, and reunited for another performance at this year’s Studio-A-Rama.

A few missed notes from their old songs were forgiven, and it didn’t stop the audience from getting into their music.

They left the stage saying, “We’ll see you again in 38 years!”

A noticeable influx of people had flowed into the gate during Mirrors, and that pattern continued directly before Mikal Cronin took the stage. Matt Cuiffo, along with several other dog-walkers, strolled into the area with a pup on a lease. “It’s sweet that they let them in,” he said, looking down at his dog. “I didn’t think they would, but they didn’t care.”

When Cronin started performing, he had quite an array of people in his audience. Most bobbed their heads to the music, taking it in passively. However, CWRU student and WRUW show host Julian Potter was excitedly dancing to the music towards the back of the crowd, singing along to every song and throwing his fists in the air. “This was my summer album!” he exclaimed.

The courtyard created heightened volume for most of the heavier rock bands before Cronin, but the acoustics worked strangely well with his hazy, flowing music. The echoes the surrounding buildings created smoothed out some of his more faraway-styled songs, and increased tension by amplifying the volume during heavier songs too.

“Change” had elements of grunge and punk rock, but it also infused some soul. Even though guitar strings broke towards the end of the set, it didn’t disgruntle the crowd or take more than a few minutes to repair.

His almost-perfect show had the audience abuzz. As the crowd filtered through gate entrances, many were noting Cronin’s original style and performance.

Though Studio-A-Rama was only his second time performing in Cleveland, Cronin himself enjoyed the quirky outdoor venue.

“Hearing how it’s [Studio-A-Rama] been around is cool and awesome,” said Cronin. “After hearing the history behind the radio station and this even, I feel even more excited to be playing.”

Sprouting from indie roots himself, Cronin appreciates what Studio-A-Rama has to offer performing bands. “I think it’s amazing and awesome that WRUW gives the Cleveland bands the chance to play on the stage,” said Cronin.