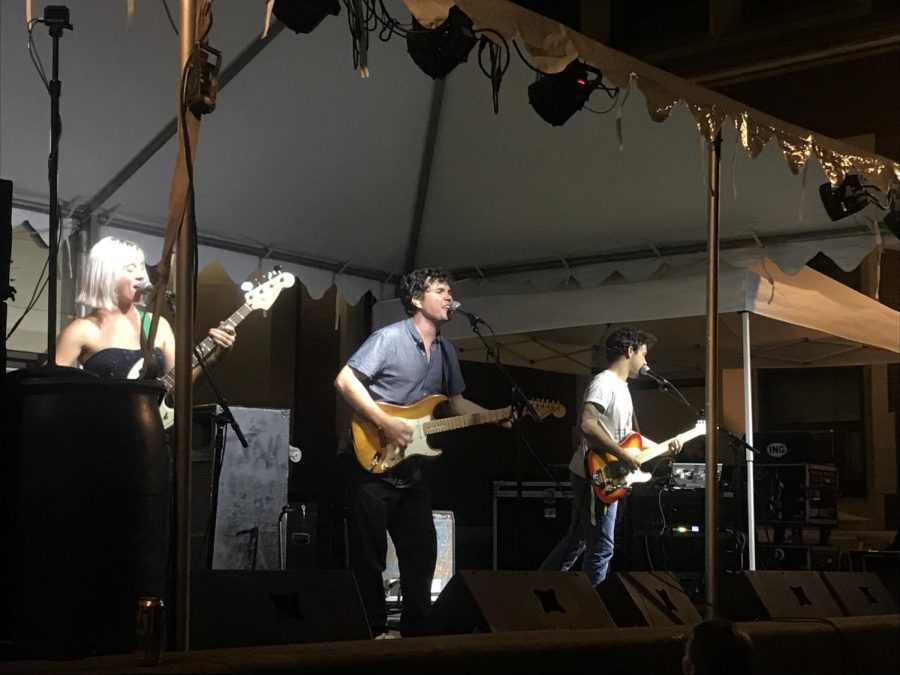 For 10 hours on Saturday, Sept. 7, the outside of Mather Memorial Building transformed from a staid lawn for study sessions into an all-day music festival as WRUW launched its annual Studio-A-Rama.

If the Hessler Street Fair, with its tie-dye shirts and Grateful Dead cover bands, is as a reflection of the flower power movement of the late ’60s, then WRUW’s Studio-A-Rama, with attendees sporting stick and poke tattoos, green hair and denim vests adorned with patches from a countless number of bands, is a reflection of the early ’80s punk movement.

The festival started in 1982 to thank listeners for supporting the station and to promote local bands. Unlike most music festivals, there are no regulars at Studio-A-Rama; bands can only perform once every four years. This ensures a constantly rotating line-up in which no two years are the same.

This year marked a return to Mather Memorial after a brief stint at the Museum of Contemporary Art Cleveland (MOCA). MOCA was not a terrible venue, but it felt right to see the festival founded to celebrate WRUW performed outside the building where its studio broadcasts music of all genres, 24 hours a day, seven days a week.

Mather Memorial created a natural concert space, the risen stone platform at the base of its central tower created a perfect stage, with the neighboring hallways funneling the crowd toward the bands. The lawn allowed listeners to sit down and picnic, unlike the concrete platform of Toby’s Plaza last year.

Around 80 bands apply to be a part of the festival according to Neal Filsinger, a WRUW executive staff member and one of the organizers of Studio-A-Rama.

“Studio-A-Rama is a good representation of a range of guitar music,” said Filsinger, who hosts Dare Waves every Wednesday from 5-7 p.m. “It’s not all punk. It’s not all indie. It’s not all heavy metal.”

WRUW programmer and fourth-year student Jimmy Wagner had a sore neck after the show from headbanging so hard.

“It involves the entire community,” said Wagner. “It’s open to everyone, it’s free and it features a bunch of great local bands.” This offers a true Cleveland experience to Case Western Reserve University students, not from the area and invites community members to connect with the CWRU campus and, of course, WRUW.

Garage rock band King Buu began the festival at 2 p.m. The second group Cotton Ponys offered a unique take on garage rock. Their psychobilly inflected music felt like three chords and a cloud of dust. Lead singer Macy Franco used an organ sound that resembled something out a ’50s horror movie. Lyrically the band went from serious topics, such as abortion, to songs about cute animals.

“I like that it doesn’t transition well,” said Franco about the band’s lyrics. “I like throwing the crowd off.”

Cincinnati-based band Electric Citizen was the first of the three bands from places other than Northeast Ohio to perform. The band had a throwback 70s hard rock sound, especially similar to artists like Black Sabbath and Iggy Pop, whose song “I Wanna Be Your Dog” was used for soundcheck. Singer Laura Dolan, who was clad in all leather and moved around the stage, even breaking down to the floor of the stage, had a stage presence reminiscent of what Pop brings to his live performances.

“We’re bringing that music into the modern world. We have the advantage of decades of rock’n’roll to draw from,” said Dolan.

Surfer Blood was effortlessly catchy. The indie-rock hit “Floating Vibes,” with its melodic guitar riff, was recognizable to much of the crowd.

Headliner Post Animal had some of the best technical chops of the night. Their dual guitar leads made even basic melodies sound fresh and powerful. Four members of the psychedelic band, the bassist and three guitarists, could sing and would sometimes trade vocals after each verse creating a great sonic variety.

After 9 hours and 45 minutes, the festival was missing something that is a staple of most great hard rock concerts.

During Post Animals’ last song, something snapped in the crowd that had previously been still. The mass of people parted, and in front of the stage, the pit came roaring up like a volcano. The stone angels lining the gothic structure stared down at the wild collection of flailing arms and limbs bashing into each other in a pure expression of energy.