Studio-A-Rama rocks through the rain 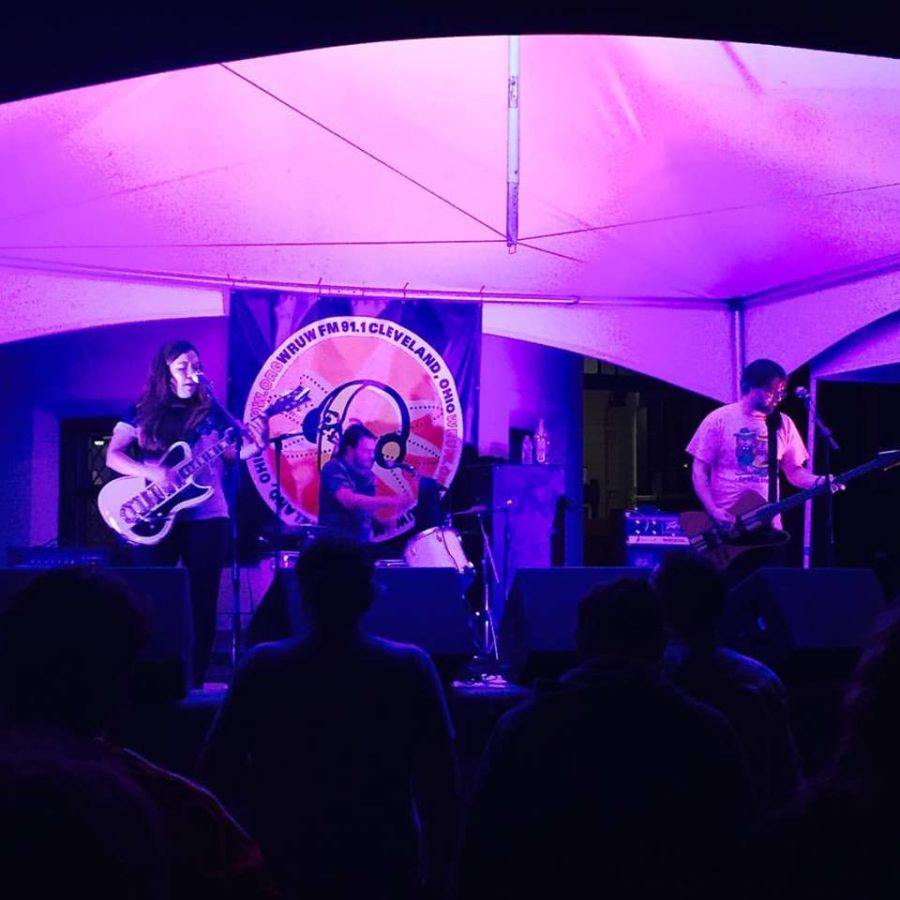 In the normally quiet courtyard behind the Mather Memorial Building, music broke through the silence last Saturday night, Sept. 10. The 35th annual Studio-A-Rama brought hundreds of people to a hidden corner of the Case Western Reserve University to enjoy performances from 11 bands throughout the day-long music festival, the oldest in Cleveland.

WRUW 91.1 FM, Case Western Reserve University’s (CWRU) student-run radio station, hosts Studio-A-Rama annually and works to ensure that the event is a lot of fun for all in attendance and free of charge. “Studio-A-Rama has always been about two things: celebrating Cleveland’s music scene and thanking those listeners that support college radio and music in our community,” said Teddy Eisenberg, a Studio-A-Rama organizer and WRUW community member. “We think of every year as an opportunity to showcase Cleveland’s diverse music scene by incorporating our city’s best and brightest new musical talents. As a commitment to keeping the lineup current, once a band has played, they can’t play again for another four years.”

As with any outdoor event, the weather is always a factor. When the festival opened just after 1 p.m. on Saturday with a performance by Soft Copy, a local Cleveland alternative rock band, the skies were sunny and bright. However, as the temperature dipped in the afternoon, the clouds turned gray and rain threatened. The festival kept moving right along as the audience enjoyed performances from The Commonwealth, Wesley Who, Dutch Babies, The Del Rios, Part Time Lover, Vivora, Glass Traps and Exploding Lies. The lineup of local bands featured a complete mix of styles and genres, fitting perfectly with WRUW’s mission of “more music, less hits.”

WRUW streamed the whole festival over the airwaves, creating a perfect back and forth between the live bands and the classic radio station, as well as inviting people to come and watch the show. However one of the radio programmers, Neal Dare Waves, jinxed the festival’s luck.

“Neal invited people to come out to the show, saying the ‘weather is still holding out’,” explained Jasmine Huesey, WRUW’s business manager. “Not two seconds later it started pouring. I was like ‘Way to go Neal, you ruined it.’”

While the rain drove some members of the audience away, a large group stuck it out, and after the rain stopped, they were ready for the final two acts of the night, New-Salem Witch-Hunters and Eternal Summers. The dichotomy between the closing acts summed up the essence of Studio-A-Rama in its thirty-fifth year. Returning to perform at Studio-A-Rama after 29 years, native Cleveland band the New-Salem Witch-Hunters looked like a group of CWRU professors having a jam session. Despite their age, the group hasn’t lost its garage rock roots in the 30-plus years of playing together, and they delivered a high energy classic rock performance that had everyone in the audience dancing along.

Eternal Summers closed out the show with a more modern indie rock performance. It was a stark shift from the high energy of their opening band but still had the audience moving and bopping to the beat. The three-member band hails from Virginia, and when performing in their first Studio-A-Rama, played a lot of their new music to the excitement of the fans in the audience. Eternal Summer kept the party going until after midnight, despite the return of some brief rain showers, coming back out for an encore after some audience persistence. Finally WRUW threw it back to studio, bringing the annual festival to a close.

As the crowd headed home and started to dry off, the WRUW team packed up and, despite the rainy day, there was already excitement brewing for next year’s 36th annual Studio-A-Rama. “My favorite part of Studio-A-Rama this year occurred right after the rain broke. As soon as the band Part-Time Lover took the stage and began to play,” said Eisenberg, “It was as if the music had never stopped. The energy they brought, especially as they covered T. Rex’s ‘20th Century Boy’, was the highlight of the day for me.”