A journey to MLB Spring Training 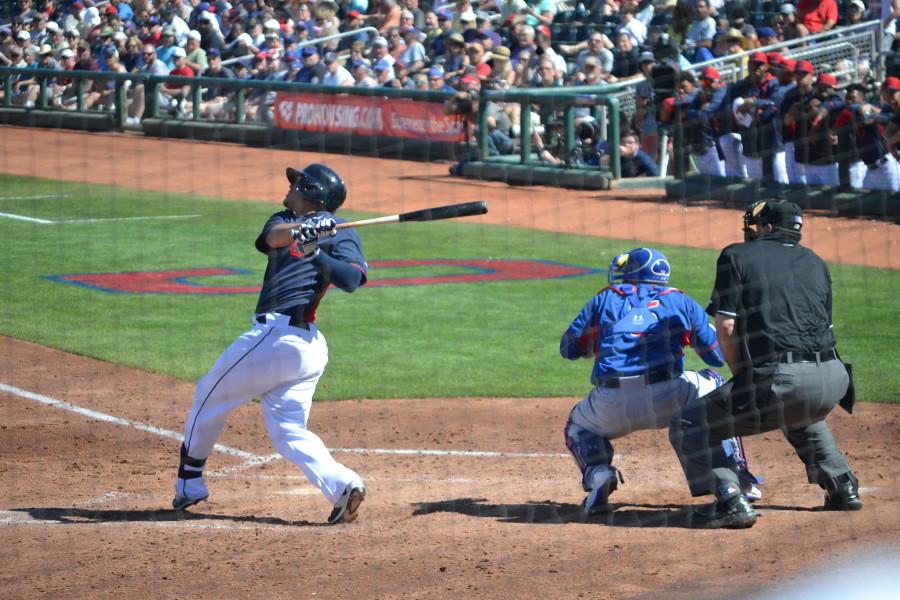 Indians minor league prospect Giovanny Urshela connects with a solid pitch in a spring training game against the Chicago Cubs.

As the plane took off from Cleveland Hopkins International Airport, a casual glance around the cabin confirmed my suspicion, that half the flight was heading to the same place I was, other than the obvious flight destination.

That flight destination was Phoenix, Arizona, but the true journey was to Major League Baseball’s (MLB) Spring Training. The Cleveland Indians, as well as my hometown team the Chicago Cubs, join 13 other MLB clubs in the Phoenix Metropolitan area each February and March in making up the Cactus League, while the other 15 clubs play in Florida’s Grapefruit League. This year the Indians’ pitchers and catchers reported to their Player Development Complex in Goodyear Arizona on Wednesday, Feb. 18, as the full squad suited up for the first time a few days later on Monday, Feb. 22. With Spring Training drawing to an end with Sunday’s Opening Day, this system makes for an exciting 46 days of baseball under the clear blue skies of the Arizona desert and Florida sun.

The purpose of Spring Training is simple: gather one’s team together and begin to shake off the rust that builds up during the off-season. Furthermore teams build chemistry with the new acquisitions, work on baseball mechanics and finally determine final rosters from their current pool of baseball talent, from the veterans to the minor leaguers fighting for a spot on the major league roster. These important preseason processes are carried out both in the training facilities and practice fields and also through daily games at the 10 stadiums for the 15 major league clubs.

Last season the Indians also had high hopes entering the season. With a Cy Young-winning and breakout year from right-handed pitcher Corey Kluber and a high-powered offense led by left fielder Michael Brantley, catcher Yan Gomes and second baseman Jason Kipnis, the Indians looked primed to contend for the American League division title and advance past the Wild Card game, where their season ended the year prior. However the Indians faded down the stretch due in part to injuries and saw division rivals, Kansas City Royals, come to not only take their spot in the playoffs but also make their way to win the American League Pennant and compete for the World Series.

This spring the Indians have been focusing on enhancing roster, staying healthy and finding a balance of veterans and new blood in the major league clubhouse. A few of the decisions have come down to this final week, as Zach McAllister and T.J. House have won the two remaining open jobs in the Cleveland Indians’ starting rotation. The addition of Brandon Moss from Oakland Athletics along with Brantley and an improvement from right fielder David Murphy should create a formidable outfield. Murphy attempted to make the transition from left field, Brantley’s position, over to right. His struggles last season have led to an increased dedication to learning the position this spring. This is a part of the spring training process. The Indians have a 13-16 record thus far this spring training, and while this record seems disappointing for a team, the focus is on improvement and making the tough decisions on building a competitive team for this season.

The Cleveland Indians play at the small but intimate Goodyear Ballpark, which they share with their Ohio neighbors, the Cincinnati Reds. The fairly-new facility opened its doors in 2009 and has served as the joint home of the Reds and Indians ever since. The stadium holds 10,000 fans, and the layout places each seat close enough to the action that there is no bad seat in the house. The paths from the parking lot to the gates are lined with palm trees, a rarity in Ohio, and they serve as reminder of this place being a baseball-focused paradise. However Goodyear and all the parks attempt to bring the flavors of home to the Phoenix area as well. Goodyear provides Bertman’s Ball Park Mustard for your hotdog at each concession stand, which is a Cleveland fan-favorite. On the other hand, a Skyline Chili-dog can be bought at a stand down the left field line, a Cincinnati staple.

Spring Training games are baseball at its purest, but perhaps not finest. The fans who attend are some of the most dedicated baseball fans in the country. A typical conversation ranges from debating the top prospects to talking about the quirks of each team’s home stadium, discussing each team’s potential. Every fan is filled with hopes for the upcoming season. The players are laid back, and the roster cycles through both the expected starters and the prospects. Kids and adults alike line up by the dugouts before and after the game, hoping to meet their heroes and maybe snag an autograph. Baseball is in the air, and the weather isn’t half bad either.

The Indians have been flying rather under the radar this spring but seem comfortable with their approach to the season. The Tribe is still without slugger Nick Swisher and will start the season without him due to injury. While they should be able to start the season fine without him, the team is obviously at its best when everyone is healthy. However despite the quiet offseason that saw high-profile trades and free-agent signings from other clubs, the Indians are once again considered the top opposition for the Detroit Tigers in the AL Central. As such the Indians are consistently ranked amongst the top 15 ball clubs heading into Opening Day.

During spring training every team is on equal footing. However this is baseball and anything could happen, any and every team could win the World Series come October. A week at Spring Training is an escape from reality, with shorts and baseball in March. This escape from the cold and reality of the season ends this weekend, as the MLB kicks off its season on Sunday, but the stadiums will patiently await until hope springs anew in baseball fans next year and another spring training begins.