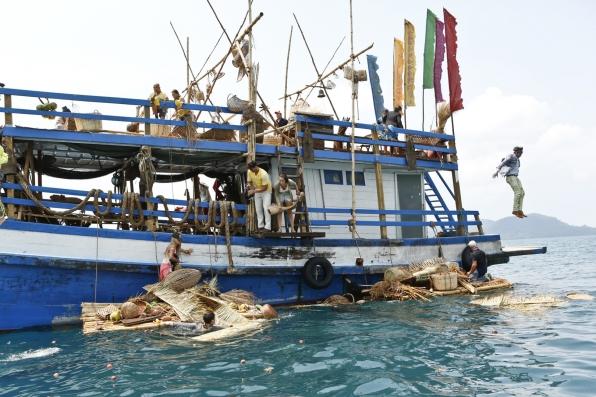 “Survivor” is back, and, like any show in its 32nd season, it’s returning to what works. “Kaoh Rong” is going back to “Cagayan’s” brains vs. brawn vs. beauty three tribe structure, with a whole new cast of pretty, strong and smart contestants angling for the million dollar prize. Here’s my snap impression of each of them based on just what we saw in the first episode.

Joe: Joe is 72 and probably in better shape than me. He’s a retired FBI agent who likely has more life experience than the rest of his tribe combined. He may struggle to fit in at first, but I think that Joe’s strength and smarts will keep him in the game for a while.

Debbie: Debbie seems smart, and she clearly has a lot to say, but her abrasive personality and seeming inability to actually do most of the things she claims to be able to do will likely make her a pre-jury boot.

Elisabeth: Our “quantitative strategist” has joined with the other younguns on the tribe to pair up and vote out those horrible olds (Debbie and Joe). Something tells me Liz won’t last until the end of this venture.

Neal: Sure, he came across kind of rude, but he founded an ice cream company, so I’m willing to give him a second chance.

Aubry: Already unable to handle the heat (literally) just a few hours in. Possible quitter; if not, an early out.

Peter: Peter seems incredibly intelligent, but that, in addition to his strength and attractiveness, will likely make him into someone who no one wants to take past the merge.

Alecia: Says she’s not what people think she would be like; probably is. Early boot.

Cydney: Smart, quiet and likely very good in challenges. I see Cydney making it far, maybe even to the top three, but whether or not she is going to make bold enough moves to grab the final prize remains to be seen.

Kyle: Developed a John Cochran-esque sunburn within the first fifteen minutes of the episode. That’s about all I remember about him.

Jennifer: OH MY GOD with the bug that crawled into her ear. I cannot, this is probably the worst possible thing I have ever heard of happening on “Survivor.” I feel for you, girl. I feel for you so much.

Scot: Scot is smart to admit that he’s a former NBA player, considering his height probably made it obvious. That may be the only smart thing he does all season.

Darnell: Pooping in the ocean in front of all of your tribe mates and convincing them to laugh it off? That’s real talent. Unfortunately, though, he was the first voted out. He will be missed.

Anna: Anna seems smart and savvy, and I like her idea of an all girl alliance, especially with my impression of the rest of her tribe. It’ll be interesting to see if she is actually able to bring in her skills as a professional poker player into the game, considering how few players have been able to do that in the past.

Caleb: Although it was pretty cool when Caleb beast mode cowboy-ed over that girl’s head off the boat in the opening, the rest of his appearance was not my favorite. Being ultra-creepy on “Big Brother” should not warrant you a spot on “Survivor,” and his already semi-racist comments against tribe mate Tai reinforced my opinion that this country boy never should have been allowed on reality TV in the first place.

Julia: Julia seems sweet enough to come in second or third place, but I’m not sure she has the big moves in her.

Tai: Ah, Tai. I had so much hope for you, Tai! But then you went and were super obvious about trying to find an idol on the first day. Sorry, but your tribe is not going to be able to trust you now.