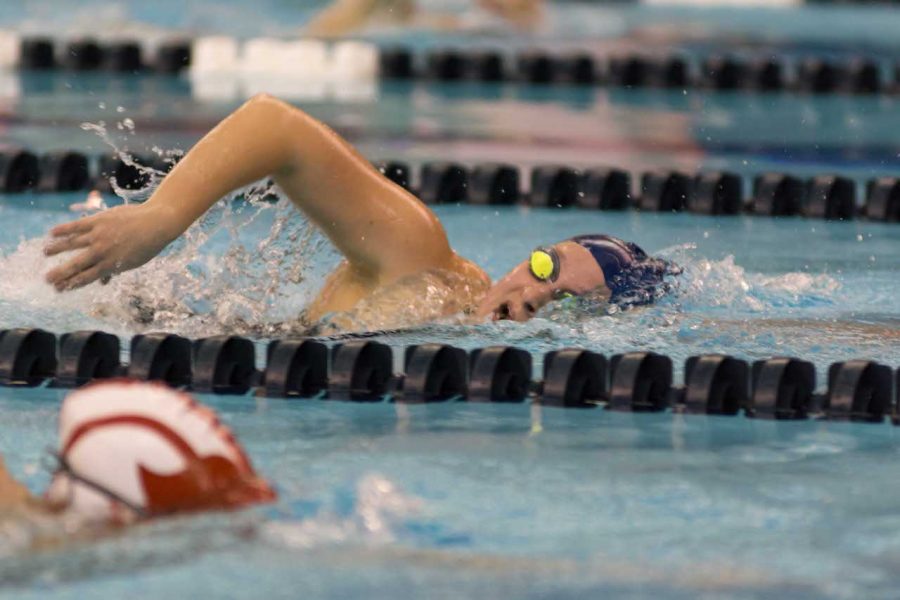 Facing their stiffest competition of the season, the Case Western Reserve University swimming and diving team placed sixth in the men’s and seventh in the women’s meet at the University Athletic Association Championships. Both teams put up noteworthy performances with many season bests and personal bests recorded throughout the meet.

Head Coach Doug Milliken was quite happy with the way his team came together for the biggest meet of the season.

“I was very pleased with the meet. It started a little slow for us, but then some people put together some great swims and that really inspired the rest of the team,” he said.

Third-year student Oliver Hudgins broke the school record in the 200-yard backstroke. Hudgins placed second in the event and recorded a NCAA “B” cut time of 1:48.79. Hudgins time was over a second better than the previous school record of 1:50.00 which he set himself at last year’s UAA Championships. By making the “B” cut time, Hudgins has a chance at qualifying for the NCAA Championships in April.

The Spartans men’s team scored 786 points throughout the course of the meet. That was good enough for sixth place but couldn’t match Emory University. Emory won the meet with 1,650.5 points, while Washington University in St. Louis finished in second place with 1,516.5 points, and New York University (NYU) was third with 1,269 points.

On the women’s side, CWRU totaled 552.5 points which was good enough for seventh place. Emory was also victorious on the women’s side as they won the meet with 1,924.5 points. NYU claimed second with 1,468.5 points, while the University of Chicago notched a third place finish with 1,440 points.

The Spartan men finished the meet with three individual “B” cut times. In addition to Hudgins, third-year student Drew Hamilton placed sixth in the 1,650-yard freestyle while recording a time of 16:03.26 and second-year student Keith Erichsen placed ninth in the same event with a time of 16:10.99.

“You can always look at a meet like this and think, ‘we could have done this or that better’, but I feel like we performed well,” said Milliken. “We had some injuries; we had the stomach flu rip through our team, but we had a lot of lifetime best times, the team pushed and encouraged each other, and at the end of the day, they enjoyed the ride.”
Moving forward, the Spartans will now turn their attention towards the Midwest Invitational, hosted by the University of Chicago. They will travel back to Chicago from Friday, Feb. 17 through Saturday, Feb. 18th. The competition is set to begin at 6 p.m.