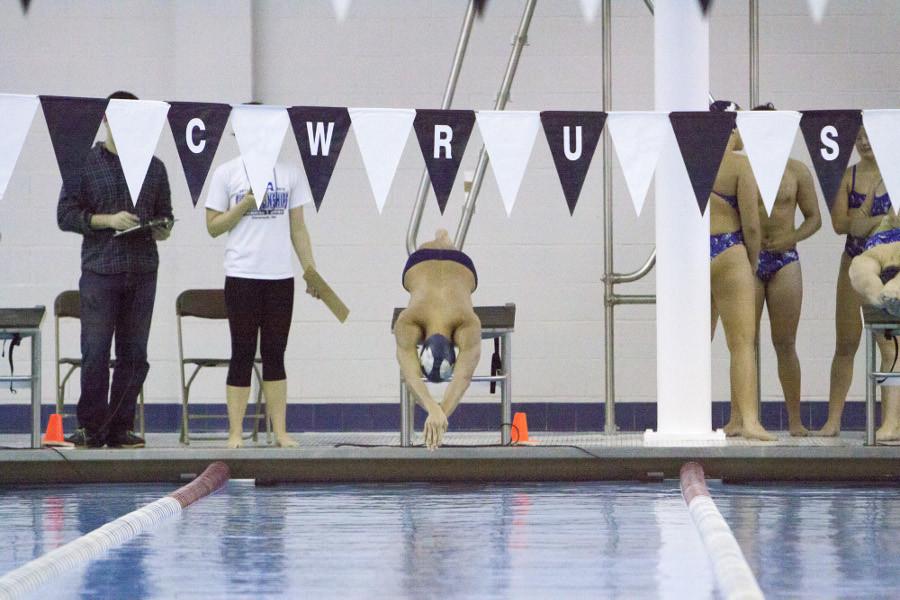 The Spartans will dive off the blocks for the first time this season on Saturday Oct. 24th against crosstown rival John Carroll.

While most people think of autumn as the end of swimming season, when you are racing competitively, fall is just the beginning.

Both the men’s and women’s Spartan Swimming & Diving squads kick off their 2015-2016 season, the sixth under head coach Doug Milliken, this weekend against cross town rival John Carroll University (JCU). The Case Western Reserve University squads picked up their first win of the season last year against the Blue Streaks after a season opening loss to arch-rival Carnegie Mellon University. The Spartans saw to a 144-77 win on the men’s side and a 140-97 win on the women’s.

On the women’s squad the Spartans will be looking for the 14 new swimmers and divers to really boost the squad. The team is extremely young as there are only four upperclassmen returning to the team. The Spartans will be lead by fourth-year student Rebecca Pakradooni who has long been a strong presence for CWRU. Throughout her first four years. Pakradooni has excelled in freestyle and has been a strong leg of many of the Spartans’ relay teams.

While there are 12 returning second-year students, all of whom have already excelled for the Spartans, the team will be missing one of last year’s up and coming speedsters, Mary Katherine Miller, who posted two school records in both the 200 and 400 IM. Miller left the team this year and will leave a void that the incoming swimmers look to fill. However the Spartans will be lead at the second-year level by Ellie Wilson who also grabbed a school record last season as she posted a 1:04.91 in the 100M breaststroke.

The CWRU men’s squad will be welcoming seven incoming first-year student swimmers. The Spartans will be lead by a strong senior presence as six fourth-year swimmers are returning for their final campaign. Amongst these, Aaron Tam will have a strong leadership role following this season with his trip to the NCAA Championships last spring.

Joining Tam at the Championships last year and returning for CWRU were first-year students Oliver Hudgins and Drew Hamilton. Now second-years and entering their second season both Hamilton and Hudgins will look to improve on the successes of last year, which included a University Athletic Association Rookie of the Year award for Hamilton and multiple school records between the two of them. Along with their highly talented second-year class of swimmers who all now have a year under their belts, the entire squad will look to improve on last season.

Against JCU this weekend the Spartans will be facing off against two novice teams. A majority of both the men’s and women’s Blue Streaks squads will be competing at the collegiate level for the first time as their rosters boost 12 first-year swimmers for the men and no fourth year swimmers, and the women’s squad is comprised of 17 underclassmen to a mere seven upperclassmen.

However the Spartans won’t merely float past their opening day competition as the Blue Streak’s women squad went undefeated in conference play last year, despite the early loss to the Spartans. JCU retained fourth-year students Linsey Fano and Jane Verdi who will lead the Blue Streaks this weekend. Fano holds four JCU records in the 100 and 200 breaststrokes as well as the 200 and 400-medley relay and Verdi excels at the distance freestyle races.

The JCU men’s squad’s top performer will be second-year swimmer Brian Hulseman who, similar to Hamilton and other first-year Spartan swimmers had an outstanding first year campaign and is poised to improve. Hulseman competes in the 200 and 500 free and the 200 fly.

The Spartans kick off across town on Saturday, Oct. 24 at 3 p.m.