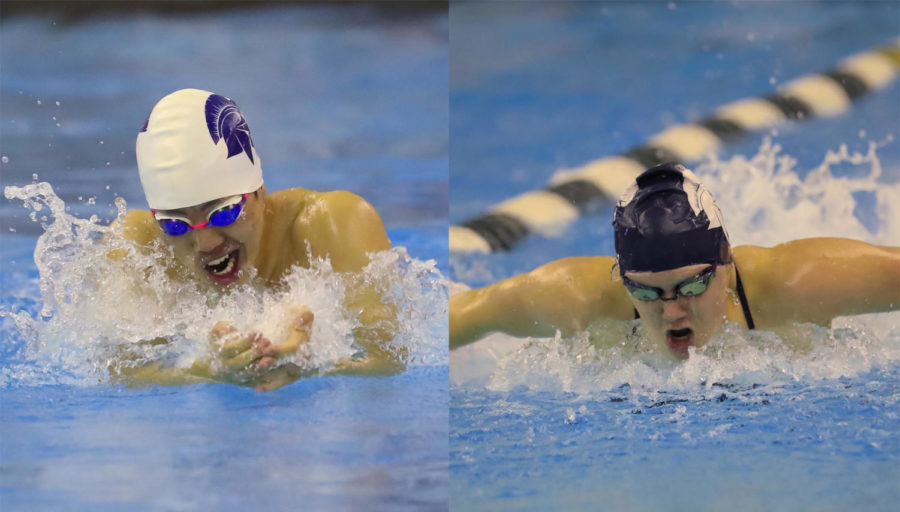 Second-year Ethan Chuang (left) and third-year Ally Halsdorfer (right) were among some to achieve NCAA "B" cut times, totaling five for CWRU.

The women’s diving team started off the events on Day One. First-year Abigail Wilkov finished seventh in the one-meter dive finals, earning a score of 403.00 to give CWRU 23 points. Second-year Rei Miyauchi finished 12th in the preliminary round with 368.35 points, first-year Jocelyn Schechter took 18th with 332.60 and fourth-year Hailey Seibert took 20th with 305.70. The three athletes earned 15, 7 and 5 points, respectively, for CWRU.

Chuang took center stage in Day Three of the championships, setting the school record in the 100-yard backstroke and as a part of the men’s 200-yard medley relay team. In the 100-yard breaststroke final, Chuang took 5th place with a time of 55.07, which was also an NCAA “B” cut time. Chignell, Chuang, Borisov and Patterson set the men’s 200-yard medley relay team record at 1:31.10 after finishing fifth in the event. Meng, Hogeman and third-years Xander Guerrero and Andrew Smith took sixth in the 800-yard freestyle relay (6:47.56).

For the women’s three-meter dive event, Wilkov finished seventh place overall with a mark of 385.30. She recorded an NCAA “B” cut mark in the preliminaries with a score of 419.95.

The Spartans have two more competitions before heading to the NCAA Division III championships. CWRU will travel to Chicago, Illinois to compete at the Midwest Invitational hosted by the University of Chicago from Feb. 18-19. The following weekend, the teams will compete in the NCAA Diving Zone Meet in Grand Rapids, Michigan hosted by Calvin University. The NCAA championships are to be held from Mar. 16-19 in Indianapolis, Indiana.