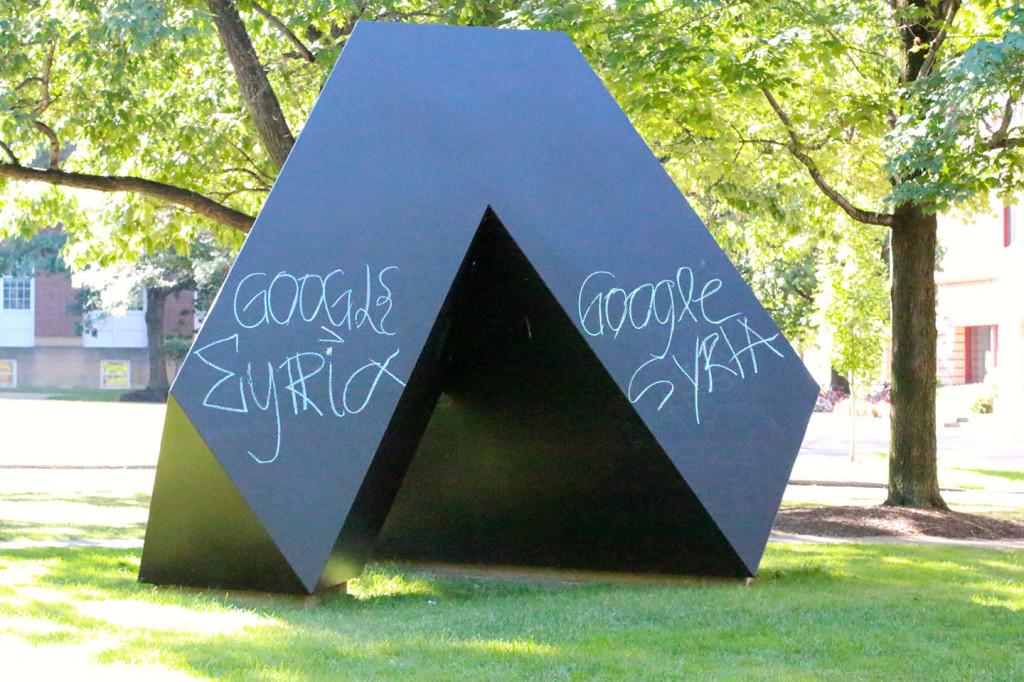 Young Americans for Liberty sought to raise awareness of the Syrian conflict with their “Google Syria” chalking campaign.

With his extended family and friends embroiled in a conflict that has killed over 100,000 people, Walid Malki struggles with the Syria conflict more than most CWRU students.

For the past two years, Syria has been involved in a brutal civil war that has torn apart the country at its seams. The war began in April of 2011 when the Syrian military fired on protesters who were calling for the resignation of President Bashar al-Assad.

“It’s a very ugly civil war,” said Malki. “We think that there’s no solution. People are dying every day, and that makes it so hard to support either side. The government is terrible; the rebels are terrible. They kill whoever’s not with them. They don’t really care about what the people want or need.”

The situation has come into the limelight as of late after accusations that the Syrian government targeted rebels with a chemical weapon attack.

“I saw a video of a girl from the chemical weapons attack,” said Malki. “She was the only survivor from her family. She was just crying and crying and saying ‘I’m alive, I’m alive,’ but really, she just saw her whole family die in front of her.

“This new generation is going to be a lost generation. They won’t go to school. They’ll think horrible, horrible things. They will grow up having lost family members to these crazy attacks. It’s a big concern for Syria.”
On Sept. 15, Russia and the United States agreed on a deal to avoid military intervention. Malki is not enthusiastic about the possibility of international intervention in Syria.

“You have international actors that are pushing either side,” he said. “They’re using Syria as a way to further their own agendas, and it’s not really helping the people of Syria. I think the best solution would be for someone impartial to come into Syria and get a ceasefire.”

Syria is about the size of Washington state, and it has a population of 22 million people. Within the last two years, over two million people have been forced to flee their homes for refugee camps.

“Syria is not something that’s way out there,” stressed CWRU Professor Pete Moore, whose focus in the political science department is on Middle Eastern politics. “It’s actually part of our community. Our friends and neighbors, their families are the ones suffering.

“We should be sensitive to that fact, and sensitive to the divisions that exist in the community. Well-meaning people on all sides of this conflict are afraid,” Moore said. “Syria is unraveling. We are witnessing the destruction of an entire society.”

Moore continued: “The Syria that existed before 2011 is not going to come back. In the middle of a civil war, you keep your head down. If you stick your head up, if you try to resist the government or the rebels, then you’re going to get your head cut off.”

Recently, the debate over international intervention has picked up steam due to the president’s alleged use of chemical weapons.

“The Obama administration says that they have been trying the last couple of years to try to develop diplomatic means of resolving the crisis,” said Moore. “President Obama said a year ago that chemical weapons were a red line… We make a very large deal about the humanitarian aspects of chemical weapons.”

In mid-September, the Syrian government agreed to work with the United States and Russia to destroy all of their chemical weapons by 2014. Although some are optimistic about this development, Moore is skeptical.

“I think the consensus is that this is part of a survival strategy by the regime,” he said. “Is it possible that we could see progress on gathering these weapons and putting them under international control? Sure, if the regime feels that it’s safe. But if they feel they’re being seriously threatened, then they probably won’t follow through.”

Moore believes the Syrian conflict is a proxy war, where the United States tends to pursue militaristic solutions that will not solve the underlying issues, and instead will create a more unstable situation.

“When Case students graduate, go out into the real world, many of the consequences of these American government policies in the region will affect us,” he continued.

Moore stated that the United States’ decisions are not popular because of poor foreign policy choices.

Rachael Becker, the president of the Young Americans for Liberty, wants to encourage students on campus to take action and learn about the conflict in Syria, and how it could affect the country in the future. Over the past week, the group chalked the word ‘Syria’ around campus.

“We wanted to encourage people to look up Syria and form their own opinions, not just the opinions that people are telling them to have,” said Becker.

Four days later, they put up a Free Speech Wall outside of the Kelvin Smith Library. “Our main mission as an organization is to educate people… The purpose of the wall was to do just that—to get people to think, and write about what they were thinking,” Becker added.