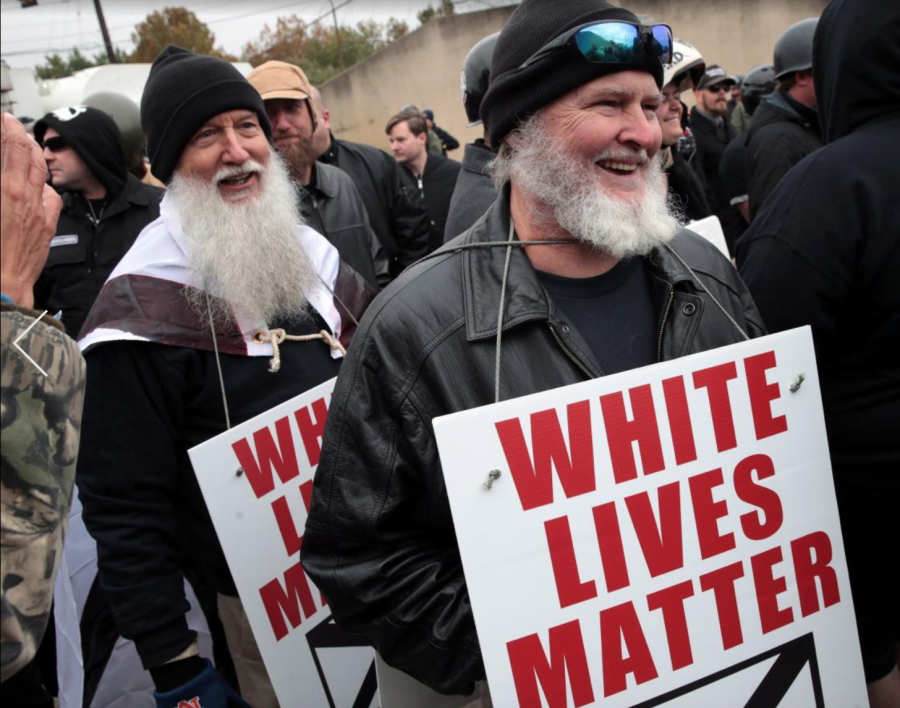 Nothing brings me quite as much joy as watching white nationalist rallies get outnumbered by those in opposition.

The secondary Charlottesville rally, the failed protests in Shelbyville, Tennessee—reading the news to hear that the crowds drowned out the hateful rhetoric, that people flooded the streets to drive out those donning white supremacy symbols gives me a good feeling. It makes you feel a little less scared for the sanity of our country.

The fact that these people feel the need to meet and protest, because the situation of being white in America is apparently “so bad,” makes you wonder if you’re living in a separate reality than them. (Their reality is one where they apparently need to bring torches and shields to a peaceful protest.)

However, the images that I found the most disturbing were the ones of gray-bearded men proudly toting “White Lives Matter” signs through empty streets like they were martyrs. It truly emphasized exactly how encapsulated these people are in their own bubble, and how unwilling they are to listen.

Context is key. And when you ignorantly repurpose that phrase to your white supremacy protest cry, it becomes a matter of power rather than its intended subject of police brutality.

Honestly, any repurposing of the slogan “Black Lives Matter” tends to erase its purpose and turns the phrase into a practice in redundancy. That includes the notorious “All Lives Matter.”

“But wait,” you might say. “All lives do matter! We should fight against police violence for everyone, not just for the black community!”

That’s fair. Out of 836 fatal police shootings this year, 396 of the victims were white. It’s not a problem based solely on race.

But in a country that’s 77 percent white, minorities are constituting more than half of the police violence fatalities. Almost a quarter of all victims are African-American. While police brutality is an issue for the nation as a whole, we can’t just ignore the fact that it’s disproportionately affecting a group that only makes up 13 percent of the population.

In our country, white lives have always mattered. You don’t need to make a sign reaffirming that. Everyone can already see that in just about every aspect of our country, from the government to the workforce to the media. White people get a leg up solely for our appearances.

And “All Lives Matter,” while true, isn’t really a pressing issue. We all already agree that all lives matter. We acknowledge that life should be safe for everyone in the nation. That’s why we have a government and police force.

The issue is that people won’t acknowledge that these peacekeepers are the ones who are making life dangerous for some populations.

Black Lives Matter isn’t a movement whose goal is to elevate anyone over anyone else. It’s a motto that points out a consistent failing of the police system: That black people are more likely to be faced with unnecessary police brutality for things that white people are not; that a police officer’s acts of violence are more likely to be swept under the rug if the victim is a black person.

To “White Lives Matter” folks: This isn’t some sort of power struggle. This isn’t a matter of superiority, or who’s better than who or whose life matters more. Black Lives Matter is a cry for equality that you consistently insist on ignoring.