Take Back the Night celebrates rebirth 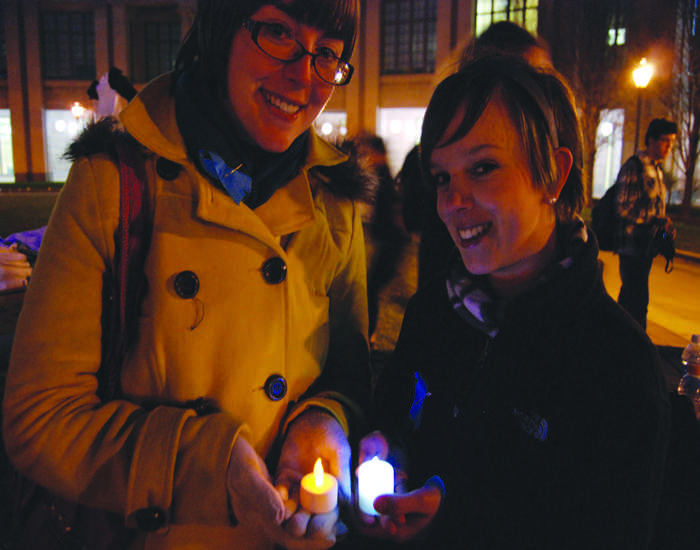 “I think that because the Student Action Group never existed [until last year], the program was thrust on the Women’s Center exclusively. There was not the invested student initiative to get it going again,” said Adrian Waldron, president of the newly USG recognized student organization.

“Community awareness at the time was low, and without students putting on the event, there was less of a ‘promotion fever’ surrounding it. There is a common misconception on campus that abusive relationships and rape do not happen here because it is something that goes on at frat schools, but not intellectual campuses like Case. But our group contends that rape and violence occur at all levels of American culture.”

Take Back the Night is a huge event at other schools, with large attendance and a rally-infused spirit that raises awareness and excitement in college communities to promote sexual equality and respect the rights of all students, male or female. “Sexual violence is not just a personal issue; it is a cultural issue and a community issue. It is something that affects men, women, and children, so men are always welcome to be a part of Student Action Group or Take Back the Night as survivors, friends, supporters, and those who have been affected by it,” said Waldron.

Early on April 3 at lunch, the Student Action Group will be occupying the Jolly Scholar from 11:30 a.m. to 1:30 p.m. During that time, they’ll be hosting their own “clothesline project,” an activity that has gotten national attention and functions like a Post Secret-type confession, except with T-shirts. Students are invited to come and make a unique design that somehow pertains to sexual assault or domestic violence awareness. They’ll receive a free milkshake from the Jolly Scholar for participating. The T-shirts will be hung in Thwing through the following week as a long-term way to promote awareness about sexual violence.

“Sayings that can be on a shirt can be something cathartic, or a slogan like ‘no means no,’ ‘my dress doesn’t say yes,’ all sorts of things,” said Waldron. “It can be a painting or something emotionally expressive. It is the whole spectrum that emphasizes how sexual violence can affect many types of people. The T-shirts that will be made are a representation of how many different people that sexual assault has affected in one way or another.”

Take Back the Night will officially begin at 7 p.m. From 7 to 8 p.m., event organizers and attendees will meet in the Thwing Atrium, where dinner will be provided and the documentary “Boys and Men Healing,” a film about men who have suffered sexual abuse and have gone on to be survivor advocates, will be shown. The dinner will be an opportunity to chat and get to know other attendees before sharing with one another later during the speak-out.

Dr. Nora Feeny, a prominent post-traumatic stress disorder researcher, will be the guest of honor at this year’s Take Back the Night. She will open the event with a brief introduction and a moment of silence. “The event this year will make reference to trauma survivors in order to promote the understanding that no matter how much time has passed since the event, there is always a community that survivors can reach out to,” Waldron stressed in regards to Dr. Feeny’s role in the proceedings. “We want survivors to know that even decades after the trauma has occurred there is always an opportunity for help.”

After the moment of silence, the speak-out will start with an open-mic format where anyone can come forward and share anything that has moved them to stand up against sexual assault or intimate partner violence. The Student Action Group and the Flora Mather Stone Center for Women will provide a small gift to anyone who contributes in speaking out against sexual assault at the event. All attendees will receive T-shirts promoting the event and its mission.

When the speak-out is over, everyone will be invited to come back inside Thwing to have dessert and unwind after the emotional and nurturing event. “We’ll have tons of food because we want people to come mingle and embrace an issue that is normally stigmatized. We want participants to feel that there is a strong community here and to connect with people who have had similar difficulties or experiences,” said Waldron.

The KSL oval will be decorated with picket signs for the evening, acknowledging the roots of Take Back the Night and how the event traditionally began. Campus marches are fundamental to Take Back the Night, which began in the 1970s with women going out in the early morning hours to reclaim their right to walk by themselves at night. It was a protest against the constant threat of rape that they faced every day.

“Because our event is small, we haven’t done the march in the past,” said Waldron. “Larger universities with greater attendance take the form of an empowerment rally; with our smaller event we take it as more of an emotional occasion, but we hope in the future as we become larger and have more speakers, we hope that that is something we can provide.”

This year, members of the Student Action Group have become active on campus in more ways than just Take Back the Night. They were instrumental in the redesign of the bathroom posters addressing intimate partner and sexual violence. They have also distributed condoms on campus, sent members of the group to present at fraternities and sororities to add a personal touch to their risk management seminars, and acted as guests on the WRUW public affairs show “Voices and Choices.”

“One of our big goals for the future is to coordinate with the Cleveland Rape Crisis Center to assist in teaching sex education courses in Cleveland public high schools as a way to inform young people about healthy relationships and how to deal with sexual misconduct,” Waldron explains.

The Student Action Group has made huge strides to bring an awareness and understanding of how to recognize and prevent sexual violence on campus; however, the issue will perpetuate through college and into the real world. The Student Action Group hopes to educate CWRU students in order to be more aware and informed educators as they take the next step into responsible and loving adult roles.