Talking the talk: a short vacation in Gaeltacht 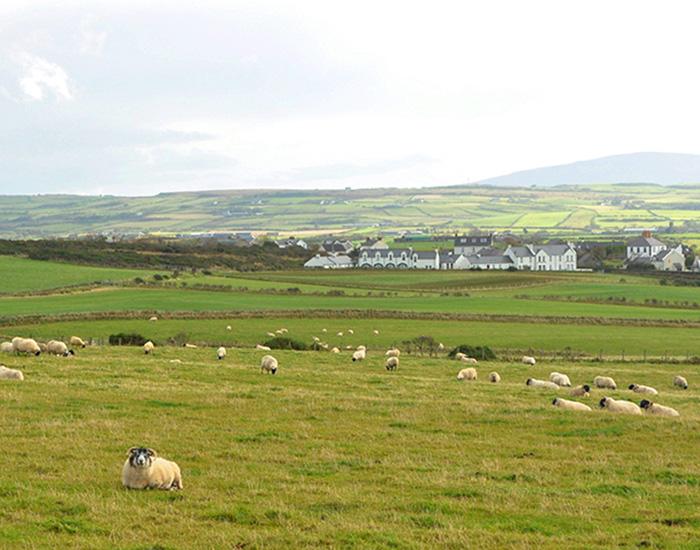 Last weekend, my Irish language class took a field trip to the Gaeltacht. It was more like a vacation than a field trip – we spent the weekend there, and we stayed with lovely Irish families who fed us authentic Irish food. A Gaeltacht is a region, usually way out in the boonies, where people speak Irish all the time.

A tourist may be surprised to learn that most Irish people don’t actually speak Irish. They all learn it in school but forget it as soon as they grow up and realize how useless it is. Plus, it’s a chore to learn, and I’m not just saying that because I’m an American – any Irish person you meet will tell you the same thing. They love to joke about how ridiculous and miserable it is.

So why are the Gaeltachts still around, you might ask? Well, the government gives people money to keep the Irish heritage alive. If you want to build a house out in the country, you can get government funding for it by filling out a form saying your family will speak Irish within the house. And the government has a special task force called the Gaelsquad that will check in on you occasionally to make sure you’re really speaking Irish (I made that last part up. Could you tell?).

I learned a lot in the Gaeltacht, such as what to say when someone sneezes: “Dia Linn,” which translates to something like “God be with us.” If he or she sneezes a second time (or especially hard the first time), you say “Dia Linn is Muire,” meaning “God and Mary be with us.” In the event of a third sneeze: “Dia Linn is Muire is Padraig,” calling upon God, Mary, and St. Patrick. I suppose if the person were to continue sneezing, you would be forced to continue down the celestial food chain – I’m guessing Arthur Guinness would be next in line.

I also learned a folktale about why some of the sheep in Ireland have red wool on their backs. According to our tour guide, they’re “killer sheep” – they roam around the countryside murdering innocent travelers, then sling the bodies over their backs and carry them off into the bogs to dispose of. The wool on their backs is stained red from the blood.

But what about the blue-backed sheep? Well, the killer sheep are just as easily deceived as the rest of us – they’ve lent money to the leprechauns on more than one occasion and never seen it again. And, little-known fact: leprechauns bleed blue. The Irish have such a whimsical, morbid sense of humor.

We spent considerable time in the pub during our weekend in the Gaeltacht, taking in traditional music and dance. Sean-nos, or “old-style,” singing is vastly different from anything I had heard in Ireland. It is generally unaccompanied, and the singer seems to just make up the melody as he or she goes along. That is why they say you either have it or you don’t – naturally, none of the foreign students had it. The sean-nos dancing, which is similar to our tap dance, was a little easier to grasp. Unlike the sean-nos songs, which tend to be somber and haunting, sean-nos dancing is done to fast, upbeat tunes like “The Road to Lisdoonvarna” or “I Buried my Wife and Danced on her Grave.” It’s powerful stuff, especially when the dancers start dancing with broomsticks. That’s how you know they mean business.

Now that my Gaeltacht vacation is over, I’ve got two weeks of finals coming up – starting with my Irish exam!