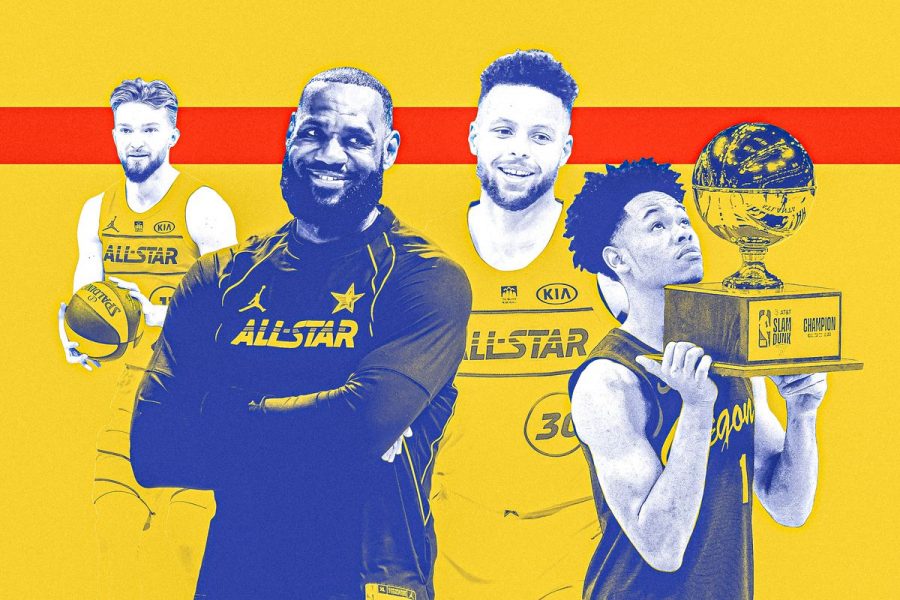 Courtesy of The Ringer

On March 7, NBA All-Star weekend kicked off in Atlanta. The weekend featured four main events: the skills challenge, the 3-point contest, the slam dunk contest and the All-Star Game.

The festivities began with the skills challenge, which featured six of the league’s premier players and prominently featured the talents of Historically Black Colleges and Universities (HBCUs) from various states.

Point guards Luka Doncic of the Dallas Mavericks and Chris Paul of the Phoenix Suns earned first-round byes in the skills challenge, given that Doncic was a starter for the All-Star Game and Paul was playing in his 11th All-Star Game.

In the first round, Indiana Pacers power forward Domantas Sabonis, eliminated New York Knicks power forward Julius Randle, while Nikola Vucevic of the Orlando Magic eliminated Robert Covington, forward for the Portland Trailblazers and the lonely active NBA player from an HBCU. Both Randle and Covington failed on their first attempt to pass the ball through the hole, which slowed them down and allowed Sabonis and Vucevic to eliminate them.

The final round had an atmosphere of urgency. Sabonis and Vucevic both missed several threes before Sabonis sunk the game-winner, clinching the skill challenge title. This marked the third straight year where the skills challenge title was held by a big man.

Closing out the first round was none other than Stephen Curry, the Golden State Warriors point guard famous for being the greatest 3-point shooter of all time. Living up to the title, Curry knocked down 21 of his 27 shots, putting up 31 points in the first round. Only the top three scorers from the first round moved on to the final round, and Brown, Lavine and Mitchell were eliminated.

In the final round, Tatum opened up with a measly 17 points on 13/27 shooting. Conley outperformed this with ease, scoring 27 points on 18/27 shooting. However, Curry ultimately took home the honor in dramatic fashion, scoring his 28th point on his last shot in his 18/27 shooting performance. This marked the second time Curry won the 3-point contest.

Finally, the main event arrived. On the Thursday before the All-Star Game, team captains LeBron James and Kevin Durant drafted their teams from the list of All-Stars.

Quin Snyder, head coach of the Utah Jazz, was appointed the coach of Team LeBron while Philadelphia 76ers head coach Doc Rivers led Team Durant. Each of the first three quarters was scored as an individual game, with the winner raising $150,000 for a charity of their choice.

Between injuries and COVID-19 contact tracing, many All-Stars that were originally selected had to sit out. Durant, despite being one of the captains, was sidelined with an injury along with Los Angeles Lakers power forward Anthony Davis and Phoenix Suns shooting guard Devin Booker.

The Philadelphia 76ers had two players, point guard Ben Simmons and center Joel Embiid, sit out due to COVID-19 contact tracing. Sabonis and Conley filled in as replacements. Of the five players that couldn’t play in the All-Star Game, only Simmons belonged to Team LeBron, which could explain why the game was so one-sided.

The second quarter was an entirely different story, with Team LeBron recording a 60-41 lead. Milwaukee Bucks power forward Giannis Antetokounmpo took over for Team LeBron, posting a game-best 24 points. Irving continued to lead scoring for Team Durant, tallying another five points in the second quarter. Paul dominated in the assist game. The four-time league assist champ led the court with 12 assists by the half, with Irving recording another five assists in the second quarter to continue leading Team Durant.

With a 108-80 halftime score demonstrating Team LeBron’s dominance, spectators prepared for the promising halftime event: the slam dunk contest. Though typically a larger event that warrants its own evening, this year, there were only three participants, two of whom were rookies.

As the Pacers rookie saw his campaign come to an end, Toppin and Simons prepared for their final dunk of the night. Simons became the first Trail Blazer to win the slam dunk contest after winning the judges over by a 3-2 vote. Despite the historic feat for his franchise, many fans felt this year’s dunk contest to be underwhelming and lacking creativity.

The second half of the All-Star Game soon got underway, and Team LeBron netted another $150,000 for the Thurgood Marshall College Fund in a 46-45 third quarter victory. Antetokounmpo continued to run the floor, bringing his total for the evening to 35 points, and Washington Wizards shooting guard Bradley Beal emerged ahead of Irving as Team Durant’s points leader with 23.

With the score at 146-125, Team LeBron entered the fourth quarter with a promising lead. Unlike the first three quarters, the winner of the fourth quarter would be determined by which team hit a score 24 points above that of the leading team. This was meant to honor the late NBA legend Kobe Bryant, who wore number 24 for much of his career and tragically passed away in a helicopter crash in January 2020 at the age of 41. The NBA also honored the Hall-of-Famer by renaming the All-Star MVP award after Bryant, as he had won the award a record four times.

Though Team Durant outscored Team LeBron 25-24 in the fourth quarter, Team LeBron reached 170 points first, cementing a final of 170-150 and a fourth straight All-Star Game win for Team LeBron. The win added on another $300,000 for the Thurgood Marshall College Fund, bringing the total earnings to a whopping $750,000 for the non-profit that supports around 300,000 students across 47 colleges.

At the end of the game, Antetokounmpo led the court in scoring with 35 points, despite a scoreless fourth quarter. Paul held onto the rebounds and assists leads for Team LeBron, while Los Angeles Clippers small forward Kawhi Leonard finished with a game-high 9 rebounds and Irving preserved the assists lead for Team Durant by tallying 2 in the fourth quarter.

Aside from leading the game in scoring, Antetokounmpo also made every one of his shots. This record-setting 100% field goal percentage would net him All-Star Game MVP honors.

While Antetokounmpo, Trail Blazers star Damian Lillard and Curry led the scoring front for Team LeBron, Paul led the team’s efforts in both rebounds (8) and assists (16). On Team Durant, Irving recorded the game’s only double-double with 24 points and 12 assists.

Despite the blowout victory in the game, there were several exciting moments and individual performances and a great amount of money raised for a good cause. As fans gear up for the second half of the season, they can expect to continue seeing exactly what their All-Stars provided them with this past weekend: excellence, both on and off the court.