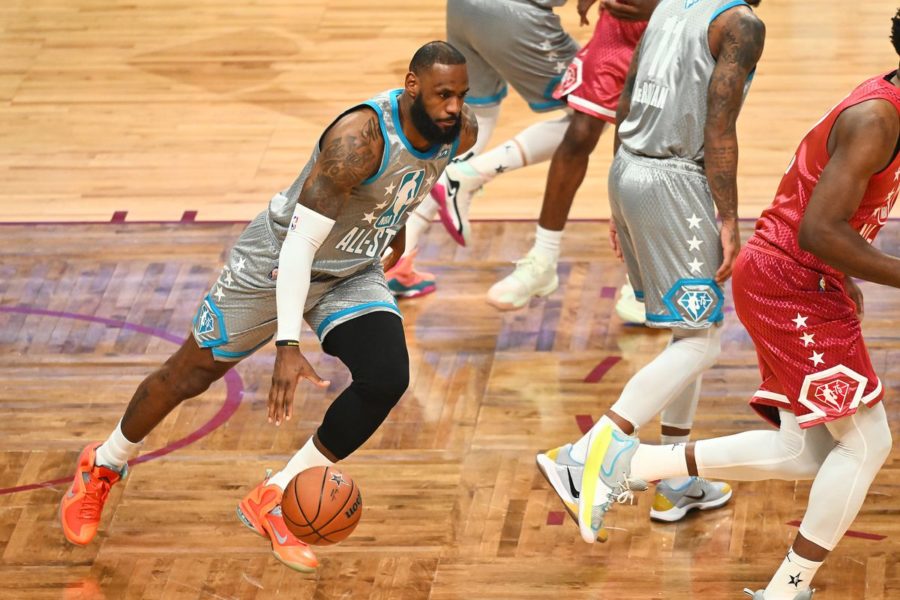 Last weekend, Cleveland hosted the NBA All-Star Weekend and the NBA’s 75th-anniversary celebration. The festivities kicked off with the Celebrity Game and the Rising Stars Challenge on Friday, followed by the NBA HBCU Classic, Skills Challenge, 3-Point Contest and Slam Dunk Contest on Saturday. Finally, the highly anticipated All-Star Game closed out the weekend on Sunday night.

This year, the Rising Stars Challenge welcomed a new format in which NBA icons Rick Barry, Isiah Thomas, Gary Payton and James Worthy drafted and coached teams of seven from a pool of selected rookies, second-year players and G League players. The four teams then faced off in a tournament. In the first round, which was played to 50, Team Isiah narrowly survived Team Worthy to win 50-49 while Team Barry ultimately defeated Team Payton 50-48. The final round was played to 25 and culminated in a 5-point victory for Team Barry. Guard Cade Cunningham, the first overall pick by the Detroit Pistons in the 2021 NBA draft, nailed the game-winning free throw and was named MVP of the Rising Stars Challenge.

The Wolstein Center also marked the site of the inaugural NBA Historically Black Colleges and Universities (HBCUs) Classic. The Howard University Bison defeated the Morgan State University Bears 68-66, and the NBA and AT&T donated $100,000 to the athletic departments of each university.

The Skills Challenge kept things going on Saturday, with yet another new format introduced for All-Star Weekend. Instead of competition between selected individuals, the Skills Challenge was a three-team activity and featured four rounds of play. Each team consisted of three players. Team Rooks was represented by Cunningham, Toronto Raptors’ Scottie Barnes and Oklahoma City Thunder’s Josh Giddey. Team Cavs sought to defend home court at Rocket Mortgage Fieldhouse with Jarrett Allen, Darius Garland and Evan Mobley of the Cleveland Cavaliers. Finally, Team Antetokounmpos featured the three Greek brothers, Giannis and Thanasis of the Milwaukee Bucks and Alex of the Raptors 905, Toronto’s G League team.

The first round focused on team shooting. Each player had 30 seconds to shoot from five different spots on the court, with each shot earning 1-5 points based on its difficulty. Team Cavs ended up with the highest collective score, earning 100 Challenge Points. The second round involved team passing and each team had 30 seconds to pass the ball through three targets of various sizes, distances and point values. Team Antetokounmpos won via a tiebreaker against Team Rooks, as the three brothers completed more outlet passes and collected 100 Challenge Points.

The third round was perhaps the most interesting, as it was built around obstacles in a relay race. Each player had to complete an outlet pass to a moving target, dribble down the court and weave between three moving pylons, nail a short shot, sink a corner 3-pointer against an automated defender and dribble back up the court to make another basket. Team Rooks emerged victorious with the fastest time and 200 Challenge Points to catapult them to the final round. Meanwhile Giannis Antetokounmpo and Garland faced off in a 3-point shootout tiebreaker for the other final round bid. Garland made his first attempt after Giannis missed to advance Team Cavs to the finals.

In the final round, Team Rooks and Team Cavs competed to see who could nail a halfcourt shot the fastest. Team Rooks went first, setting a daunting time of 9.9 seconds. Team Cavs didn’t back down as Mobley swished it in 5.5 seconds to secure the win for Team Cavs.

Next came the 3-Point Contest, in which seven guards and one big man, Minnesota Timberwolves’ Karl-Anthony Towns, aimed to make the most 3-point shots across two rounds. Los Angeles Clippers guard Luke Kennard started off by making a round-high 28 3-pointers, while Towns and Atlanta Hawks guard Trae Young each made 22 to advance to the final round. While Kennard and Young each put up 26 in the finals, the crown went to Towns. He crushed the rest of the competition with a finals-record 29 3-pointers to become the first center to ever win the event.

The Slam Dunk Contest, meant to close out Saturday with an exciting finish, was an absolute disappointment. New York Knicks forward Obi Toppin eliminated Golden State Warriors forward Juan Toscano-Anderson in the final round 92-69. Many criticized this year’s edition for its lack of flair and creativity, with Hall of Fame guard and former Slam Dunk Contest judge Dwayne Wade especially vocal and effectively calling it the worst dunk contest ever.

Unlike other facets of All-Star Weekend, the All-Star Game followed a previously used format—the first three quarters were 12 minutes each and the winner of each quarter would donate money to a certain charity. Team LeBron won the first quarter 47-45, Team Durant won the second quarter 49-46 and the two teams tied at 45 in the third.

However, the fourth quarter was played until one team had scored at least 24 points past the highest team score through the first three quarters. This goal was not arbitrary, as the points represented the late NBA legend Kobe Bryant’s jersey number. The NBA also honored Bryant following his tragic death in 2020 by naming the All-Star MVP award after him, as he had tied with Bob Pettit for most All-Star MVP awards won in NBA history. Seeing as how Team Durant held a 139-138 lead after the third, the target score to win was 163 points. Team LeBron outscored Team Durant 25-21, with LeBron himself hitting the game winner to seal a 163-160 victory. However, Curry took home MVP honors, smashing an All-Star Game record with 16 3-pointers and putting up 50 points.

The weekend was a huge win for Ohio. Cleveland hosted the events and local stars played in the Celebrity Game, the Cavaliers walked away victors of the Skills Challenge and Akron-born LeBron James and Steph Curry worked wonders during the All-Star Game. More importantly, hundreds of thousands of dollars were raised for organizations supported by All-Star Weekend, including the Kent State I PROMISE Scholars Program, chosen by Team LeBron, and the Greater Cleveland Food Bank, selected by Team Durant.

Following an eventful weekend, the NBA looks to get back into the swing of things, with 14 teams resuming action on Feb. 24.