#TeamSeas fundraiser is making a splash 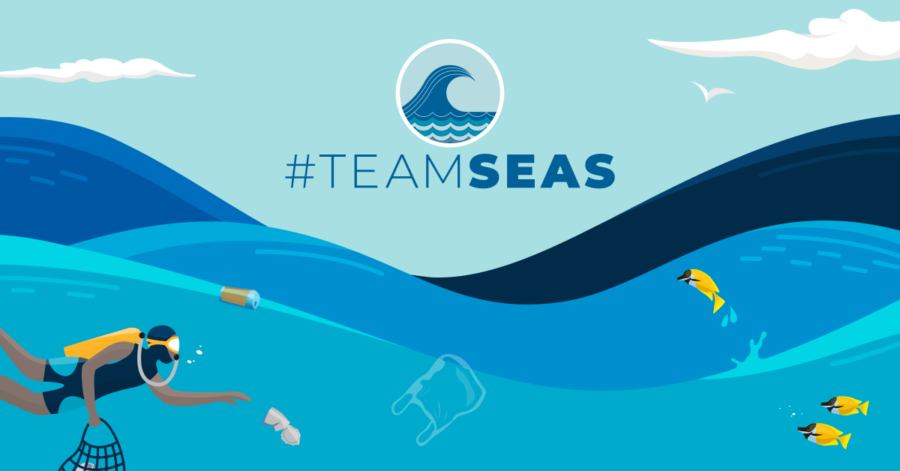 MrBeast kicks off another promising fundraiser in a collaboration with Mark Rober.

One thing you might’ve seen all over YouTube and social media in the past couple weeks is “#teamseas.” It seems just about every major content creator—spanning from gaming channels, lifestyle gurus and influencers of all sorts—hopped on this trend and are spreading this hashtag. But what is it all about, and who were the ones to get it off the ground?

On Oct. 29, the YouTubers MrBeast and Mark Rober simultaneously posted videos promoting the cleanup of beaches and waterways through their self-created fundraiser called #TeamSeas. For those unfamiliar with either of these content creators, MrBeast (real name Jimmy Donaldson) has nearly 74 million subscribers and Mark Rober has over 20 million subscribers, with both having a history of over-the-top and expensive antics. Now, the #TeamSeas project is setting its sights on cleansing our oceans, beaches and rivers of trash and plastics, in part by building off of their previous fundraiser from October of 2019, #TeamTrees.

The roots for both the #TeamTrees and #TeamSeas campaigns can be traced back to specific milestones from MrBeasts’ YouTube career. When MrBeast hit 20 million subscribers, he was bombarded with comments from fans saying that in order to celebrate he should plant 20 million trees. Not one to back down from a meaningful challenge, Donaldson teamed up with Rober to start the #TeamTrees fundraiser, and together they directly partnered with the Arbor Day Foundation, a nonprofit dedicated to planting a tree for every dollar donated to its fund. Reaching out to their enormous fan bases for donations, they set up a model where every dollar would go to the Arbor Day Foundation with the goal of planting 20 million trees before 2020. With the help of many other content creators and fans alike, the #TeamTrees initiative not only reached its goal of $20 million for 20 million trees by December 2019, but it has continued to grow to this day as donations now amount to over 23 million at the time of this writing, making it the largest YouTube fundraiser of all time.

In a similar vein to the #TeamTrees project, the #TeamSeas campaign is a celebration of MrBeast’s YouTube channel hitting 30 million subscribers, even though he reached this milestone early on in 2020. Now the goal is to remove 30 million pounds of plastic and trash from waterways and beachfronts before 2022, with the idea that one dollar equals one pound of trash removed from these places. In order to do so, the #TeamSeas fundraiser has partnered with two nonprofit organizations: the Ocean Cleanup and the Ocean Conservancy. The former was founded by entrepreneur Boyan Slat, who believes that technology is the way to rid our rivers and oceans of plastic. The latter is an environmental advocacy group with a multi-decade history of protecting the oceans and oceanic wildlife.

So far the #TeamSeas fundraiser has amassed over $13 million in just under two weeks, with that amount of trash now set to be removed. This feat is in large part due to the immense outreach from Donaldson and Rober towards other content creators, with the aim to appeal to all of their respective fanbases. To try to put their influence into perspective, the two YouTube videos announcing the initiative have accumulated a combined 54 million views, hundreds of other YouTubers have added millions of more views on their website and both Donaldson and Rober even appeared on “Jimmy Kimmel Live!” on Nov. 2 to talk about #TeamSeas.

Their influence, however, also spans further than just raising money, as they went down to the Dominican Republic in their #TeamSeas videos to help collect trash on beaches and riverfronts personally. In MrBeast’s video, he picked up trash on what he called “the world’s dirtiest beach” and on another beach, as well. Rober, on the other hand, took to one of the rivers flowing out into the ocean and had one of The Ocean Cleanup’s solar-powered “Interceptor” machines collect the floating trash. At the end of Rober’s video, he and Donaldson compared their trash yields and found that they collectively collected almost 100,000 pounds of trash.

When looking at these numbers, their ambitious goal and the results of the #TeamTrees initiative, I find this current fundraiser to be utterly astonishing. The sheer scale of people rallying around this cause and the amount of money being raised each day is huge and shows the power of online-powered movements. For instance, on the #TeamSeas website not only is there a live feed of donations, but there also is one for the “Most Trash” accumulated. Here you can see the names of people and organizations donating millions of dollars to this venture, including big names like the Royal Caribbean cruise company, the Patreon company, YouTube Originals, YouTube CEO Susan Wojcicki and many others.

But no matter the size of the donation or the name that is attached to it, I think that the #TeamSeas fundraiser reflects how impactful uniting around a cause can be. Cleaning up our oceans, rivers and beaches seems to be an intrinsically good thing, regardless of the many other conflicts surrounding our lives. I believe that an initiative like this shows what we can do if we all work together.

Whether we sink or swim is up to us.