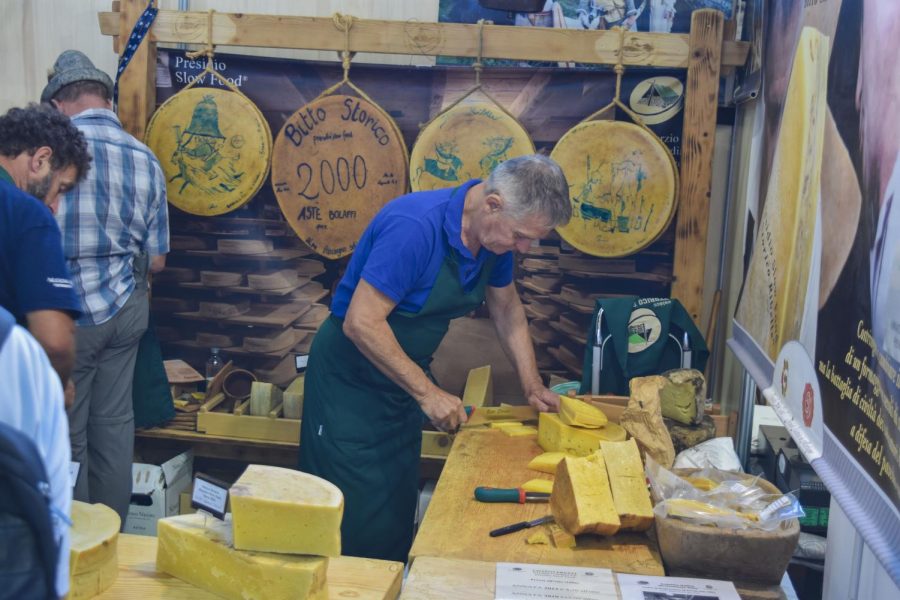 Every two years, thousands of people descend on Turin, a small city nestled in the hills of northern Italy, to eat, talk, network and party at Terra Madre Salone Del Gusto.

Terra Madre is a massive convention organized by Slow Food International, an organization designed around the idea that food should be healthy for people and the planet. The literal opposite of fast food, the Slow Food movement has chapters around the globe and an international network of food producers, providers, activists and enthusiasts.

For the most part, the organization is spread out globally and is divided by nation, state and city level organization. Biennially for five days, however, everyone comes together.

The convention is huge, taking up the entirety of Turin’s Oval Lingotto, a 8,500 person convention center and arena built for speed skating in the 2006 Olympics, and then expands to three other large buildings next door and an outdoor pavilion. Each building is packed with rows of stands, mobile classrooms and more food samples than you could possibly eat.

Event attendee Sam Phelan, an American student who came to Turin to visit a friend, described the event, with all its stands and samples, as the world’s largest, nicest Costco.

The description is fairly accurate. The lighting inside most of the older buildings is very similar—industrial but not overly bright—and like Costco, there are more things than you could possibly need.

The conference included several students and staff members from Case Western Reserve University. They travelled as part of a special topics class offered by the French and Italian departments exploring slow food ideals, significant cultural movements in many European countries.

Most students attended as members of the general public, which allowed them to explore both the conference and surrounding community in Turin. The group also sent two delegates, Cleveland State University student Mary Hunt and this reporter.

Terra Madre arranged for housing for all of its delegates by asking families in the surrounding area to host visitors for a few days. For many delegates, this meant staying in and around Fossano, a small town nearly an hour from Turin.

Language barriers did not stop host families from providing fantastic experiences for their visiting delegates. Jen Rosenthal, a U.S. delegate and urban farmer from Chicago, ended up absolutely in love with the family she was staying with. Rosenthal pulled up pictures of the family’s farm, which she received a tour of, and the pasta that her hosts had taught her to make from scratch.

Greg Wade, a James Beard Foundation Award nominee and the head baker at Publican Quality Bread in Chicago, had a similar experience, skipping the Sunday of the conference to tour the farm he stayed on and teach his Italian host family how to make sourdough bread.

By skipping Sunday, Wade missed out on the largest gathering of the convention. That night, delegates from every country gathered in a group that numbered in the thousands waiving massive national flags and playing a mix of musical styles. Scottish bagpipe players riffed with Nigerian drummers and Italian accordion players before marching the lengths of the fairground to parade across a stage and witness a speech by Slow Food founder Carlo Petrini and a concert that served as the closing ceremony of the event.

Buses returned people to Terra Madre on Monday morning, the final day of the conference, but attendance was lower than it had been on the weekend. Locals returned to school and work while delegates began their journeys home.