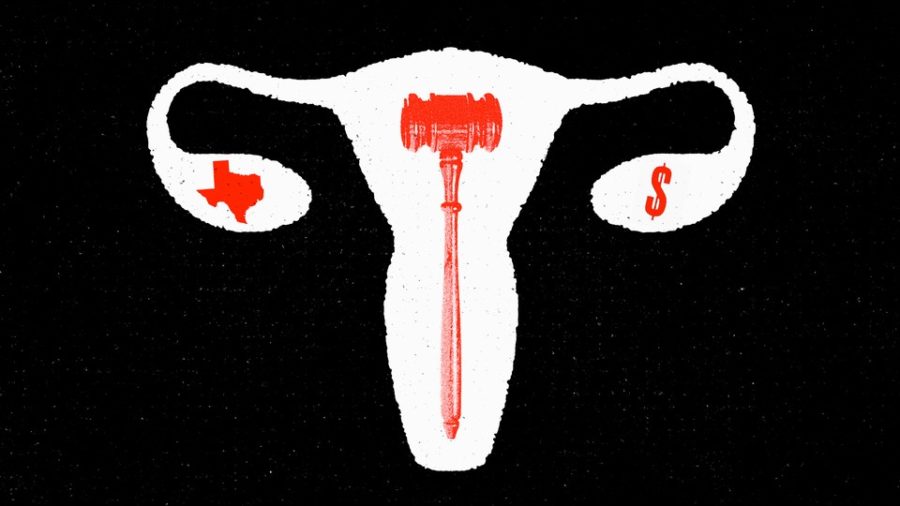 Graphic courtesy of The Atlantic

The passage of SB8 shows the true players in the war over women's reproductive rights: Texas legislation, Corporate Interests, and the U.S. Legal System

Texas implemented Senate Bill 8 (SB8), a new anti-abortion law that became effective at midnight on Sept. 1 2021. This law is one of the many anti-abortion laws nicknamed “heartbeat bills” being pushed by state governments across the United States.

It is difficult to determine a biological checkpoint in pregnancy for which abortions performed after can be deemed illegal, so anti-abortion activists and politicians sometimes use the presence of cardiac activity as the determinant of if an abortion should be deemed illegal or not. The “heartbeat” in “heartbeat bill” refers to that point of cardiac activity beginning in the developing fetus.

Texas’ new law bans abortion after six weeks of pregnancy. However, it may take more than six weeks for a woman to realize that she is pregnant since she would only be two weeks late on her period, and menstrual cycles can be irregular. Therefore, this restriction almost effectively bans abortions in Texas.

This law effectively overturned the precedent set by Roe v. Wade, the landmark U.S. Supreme Court decision that protected a woman’s right to choose without excessive government control, within the state of Texas. The 1973 case settled the issue of abortion access at the federal level.

In the case a state law attempts to supersede federal law, the U.S. Supreme Court will usually issue a stay on the state law until it can be formally reviewed. According to the Los Angeles Times, the Supreme Court declined an emergency appeal asking that the law be stayed.

Since the U.S. Supreme Court did not place a stay on the Texas anti-abortion law, in a statement released on Sept. 2, President Joe Biden called on the U.S. Department of Justice to take action to prevent harm to American citizens and legally challenge SB8.

On Sept. 9, Attorney General Merrick Garland announced that he would lead the U.S. Department of Justice in taking action against SB8. Since then, the Justice Department has requested an injunction from a federal court in Texas that would temporarily halt the law until further action can be taken to determine its constitutionality. The court hearing for the DOJ will be held on Oct. 1.

According to the Los Angeles Times, abortion clinics in the states that neighbor Texas saw an uptick in the number of patients from Texas. This is indicative of the historic trend that banning abortion does not necessarily reducing the number of abortions that are performed.

In the aftermath of the Texas bill being passed and signed into law, other states have begun planning on their own “heartbeat bills.” According to The Hill, politicians in Florida, South Dakota, and Arkansas have expressed interest in passing their own versions of the Texas “heartbeat” bill. It remains to be seen whether these states will write and pass similar laws.

According to NBC News, Mississippi’s 15-week abortion ban is being challenged in court and appealed up to the U.S. Supreme Court. The Supreme Court is currently slated to adjudicate Mississippi’s new anti-abortion law on Dec. 1, with a decision being expected during the summer of 2022. This case stands as a challenge to Roe v. Wade, and the abortion protections that have resulted from it may be reduced or removed if the Supreme Court rules the Mississippi law as constitutional.

Anti-abortion legislation can be incredibly harmful at the state level. Not only does it threaten to diminish the protections provided by Roe v. Wade, but it also jeopardizes women’s constitutional rights.

There has also been an anti-abortion push within the campus community. On the evening of Aug. 31, Case Western Reserve University’s Undergraduate Student Government (USG) voted 19-17-1 to recognize Case for Life, a student organization with an anti-abortion mission, as an official campus club. This recognition also carries with it the opportunity for the newly recognized club to be granted funding from USG.