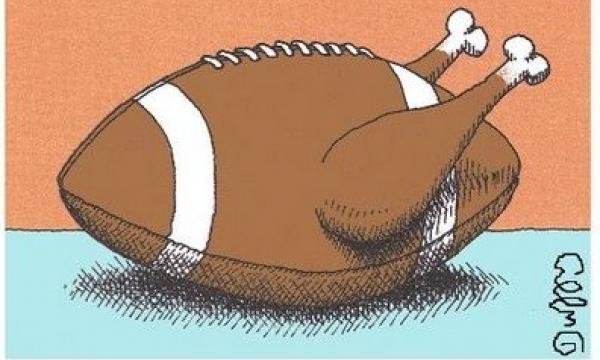 Thanksgiving means many different things to different people. For some the holiday brings the warmth of family closeness, for others the comfort of preparing a delicious spread, or having one prepared for you. However, for many, the day brings with it the anticipation of an extra day full of premium National Football League action featuring the country’s hottest teams. But for some people, the constant hum of tackling and whistles in the background of the day only provide a soundtrack to the boredom of indecipherable conversation and confusing anger.

It saddens us here at The Observer’s sports desk to think of so many people being unable to join in this time of family togetherness (or just being able to impress strangers and family friends with your excellent analysis and wit). So here is some information about the upcoming matchups to help you avoid as much of the post-meal kitchen clean-up as possible while enjoying the fun and companionship which can only come from the thrill and inevitable let down of the NFL cross-promotional cluck-stravaganza.

“This is a classic division showdown.” Tally this as the first time of many for you to read/hear this phrase. The Packers and the Lions are two of the older teams in the league and have played in every other Thanksgiving game for the past seven years. The Green Bay Packers have dominated this matchup for a while but the Lions are finally starting to get something going with the growing experience of quarterback Matthew Stafford and “Megatron” Calvin Johnson catching everything thrown in the same zip code. The Lions are currently tied for first in the division. While the Packers are in the third spot after the abysmal tie game last weekend. The favorable conditions for the Lions are enhanced by a recent injury to Pack quarterback Aaron Rodgers, whose return for the weekend is extremely doubtful.

Who to watch: Lions wide receiver Calvin Johnson will probably look to put on a show this weekend facing off against this familiar rival. Whoever is playing quarterback for the Packers will likely be a subject of some uncertainty, but they will have reliable running back Eddie Lacy trying to get something going.

What to say: “I was going to draft Lacy for my fantasy team this year, but my roommate got him in the fourth round.”

Throw a drumstick at the TV when: The Lions have their third turnover

Eat a slice of pie every time you hear: “This is a time when the Green Bay Packers really need Aaron Rodgers.”

The Dallas Cowboys, America’s (public relation juggernaut) Team always nabs a Thanksgiving Day game. This premier spot has yielded career best showings from quarterback Tony Romo despite the team’s decline in recent years. The Oakland Raiders are an older franchise and have seen their fair share of games on turkey day, with their last coming against the Cowboys in 2009. While not a bad team, the Raiders have struggled to put points on the board with a weak passing game. Meanwhile, the Cowboys are first in the NFC West division and look to bounce back from last year’s heartbreaking loss to the Washington ”Insert politically correct comment here”. Still, replacement quarterback Matt McGloin and running back Rashad Jennings might have some surprises in store for the last-ranked Cowboys defense. Most of America will be rooting against the Cowboys during this prime opportunity to let the tryptophan take its hold.

Who to watch: Tony Romo always makes something happen in close games. Look for him to try to capitalize on Miles Austin’s recent return from injury.

Throw a drumstick at the TV when: The broadcasters show Cowboys owner Jerry Jones looking as rosy-cheeked and cheery as an evil Santa Claus as his team goes ahead 28-0 over the underdog Raiders.

Eat a slice of pie every time you hear: America’s team

The marquee matchup of the day features the reigning Super Bowl champion Ravens versus perennial playoff contenders, the Pittsburgh Steelers. This game probably looked good to the NFL back in September, but both teams have struggled this season and are tied for second in the competitive (awful?) AFC North division and will likely miss out on the playoffs. Hopefully, the teams will at least give football fans a legitimate match-up in an otherwise dreary turkey day spectacle. The Steelers won by a narrow margin of 19-16 in their last game versus the Ravens, but struggles putting together a legitimate run game this season could prove troublesome should the weather become a factor on Thursday. Even though the Ravens’ tough defense could shut down the Steelers, they’ll have to do better on offense where the team ranks in the bottom half of NFL teams in every category.

Who to watch: The Ravens defense could really keep “Big” Ben Roethlisberger on his toes as they try to pull ahead in the division despite a lackluster season. This match-up could be the most interesting thing on the field as Roethlisberger can prove to be a defensive nightmare by virtue of his sheer size and stubbornness.

What to say: “Did you see Roethlisberger drop-kick the ball last week? Ridiculous!”

Throw a drumstick at the TV when: The fifth field goal is attempted.

Eat a slice of pie every time you hear: “People don’t realize how big this guy is!” (Refers to Roethlisberger)

So kick back and enjoy the festivities. You may not know what’s happening, but after two helpings of turkey, a pound of potatoes, a whole pumpkin of pie and a few nips from shady Uncle Larry’s “festive” holiday eggnog blend…neither does anyone else.