The 2021 Oscars prove that the awards show needs a reset 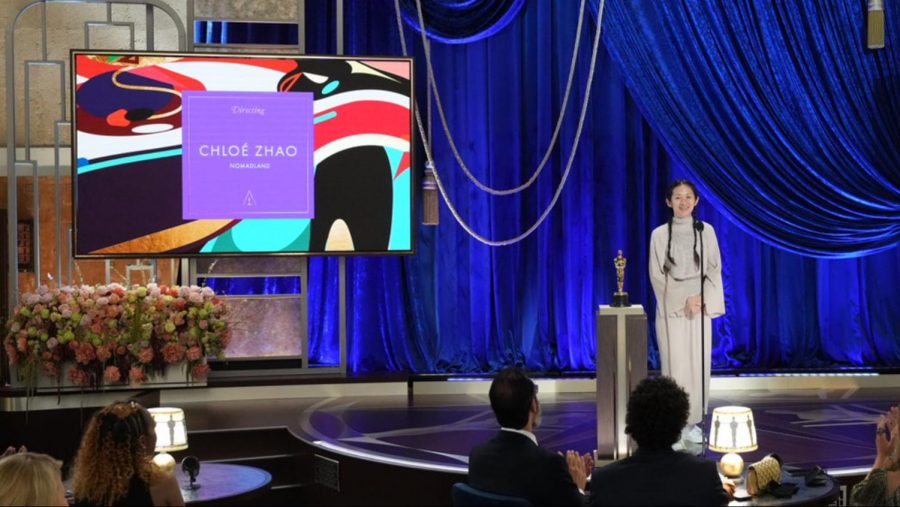 Courtesy of The Walt Disney Company

Chloé Zhao wins “Best Director” for “Nomadland” in the middle of an overall weak ceremony.

There’s no beating around the bush. The 93rd Academy Awards were a disaster. This was for a multitude of reasons (it’s not just a result of the ongoing COVID-19 pandemic), but most of it boils down to one ultimate question—who are the Oscars for?

The Academy Awards ceremony has historically been the night where the entire American film industry comes together and celebrates the greatest movies of the past year and all those who made them. Since 1929, the Academy of Motion Picture Arts and Sciences, made up of a number of motion picture professionals, has deliberated on and delivered these awards, rewarding merit in the industry and showcasing to the general public what is worth watching each year. Over the years, however, the ceremony has evolved into a Hollywood “who’s who.” This shift was marked notably by the introduction of the television broadcast, which gave viewers at home one of their only peeks at movie stars interacting with each other in the real world. From this point forth, traditions have been established—from celebrity hosts, to musical numbers, to the acceptance speeches, to the suspense as the envelope is opened and the famous words “and the Oscar goes to …” are uttered. All of this combined to make an annual love letter for the industry, as well as a commercial for the past year in film, with the ceremony providing some promotion for the films nominated. Over time, viewership of the awards show grew and grew, sometimes making it the second most watched program of the year, just behind the Super Bowl.

This year, however, the 93rd Academy Awards only attracted 10.4 million viewers, its lowest total to date, and a historic 56% drop in viewership from the previous year, which was already historically low. So, have the shows gotten worse or do people just not care anymore? I would argue that over the years, the show has actually grown for the better, with the Academy itself becoming much larger and more diverse in recent years, leading to more deserving winners. “Parasite” winning Best Picture last year was a watershed moment in film history, as it marked the first time an international film had won the award, and it absolutely deserved it. Since the #OscarsSoWhite controversy in 2016, the Academy has made great strides in their efforts to be more inclusive, with this year’s slate including many historic firsts, most notably Chloé Zhao, who became the first woman of color to win the award for Best Director. In recent years, the ceremony has also made concerted efforts to cut down on bloat, with last year’s ceremony acting as one of the most streamlined to date, featuring no host, no musical numbers and actually interesting acceptance speeches. Despite all this, viewership has continued to decline.

Much of this is probably due to the fact that big box office winners like “Titanic” and “The Lord of the Rings: Return of the King” haven’t won in a long time, but this could largely be attributed to declining celebrity culture. Due to constant exposure via social media, celebrities just aren’t as special as they used to be, with their interactions no longer the subject of all our fascinations. When Ellen DeGeneres took the famous selfie at the 2014 ceremony, it was the beginning of the end, hallmarking the start of social media celebrity culture.

Another long-standing issue with the Academy Awards has been that of bloat, with some ceremonies seeming more and more dominated by acceptance speeches, musical numbers, comedy bits and pre-recorded clips rather than actual acknowledgments of the movies themselves. There have been concerted efforts to cut down on this in recent years, including the removal of the host and time limits for acceptance speeches.

This year’s ceremony, however, may have gone too far in trying to reduce bloat by taking out the one thing the broadcast should retain—appreciation for movies. Steven Soderbergh, famous for his role as director in prominent films like “Ocean’s 11,” produced this year’s broadcast, but his aim to make this one the most unique yet backfired spectacularly. The 2021 Oscars ceremony was always going to be a stripped-down affair, with the pandemic causing the usually packed event to no longer be a possibility, especially after having been delayed from the typical February date to late April. What was not necessarily inevitable was the club-like atmosphere that this year’s event gave off. Trading the Dolby Theatre for a spruced-up Union Station, the ceremony was populated by far fewer celebrities, with the ones left sitting around booths and small tables, and camera pans showing actors casually chit-chatting. This low-key vibe isn’t necessarily a bad thing, but it comes at the expense of the actual films, with too much attention paid to the celebrities themselves rather than the projects they were in.

This is mostly due to the removal of film clips from the ceremony, seemingly another tactic to cut down on the runtime. In doing so, with just the substitution of another actor talking about why the nominee is so great, the viewers at home are disallowed from actually appreciating the work of the nominees. Rather than viewing the beautiful production design of “Mank,” or witnessing Daniel Kaluuya’s amazing performance in “Judas and the Black Messiah,” we simply hear about it from a transient master of ceremonies. This does a disservice to the films themselves, leaving many to be completely unseen with viewers given no indication what they are actually like. When the focus is on Glenn Close doing the “Da Butt” dance over the film editing of “Sound of Metal,” something has gone wrong.

Ultimately, the Oscars serve as a large commercial for the past year in film and unfortunately, not too many people have seen the movies that came out in 2020. Whether it be because of movie theaters shutting down or simply a smaller number of high-profile releases, this year’s slate of nominees were not seen by most Americans, and the ceremony seems to have forgotten that. With a low amount of clips, viewers are given a very small idea of what sorts of films are actually being rewarded and little incentive to actually watch the movies themselves. Instead, the ceremony seemingly went about catering to film buffs who are already familiar with the movies and don’t need any further explanation. This issue is only exacerbated by the fact that the acceptance speeches were—or at least felt—longer than ever, leading to a long runtime anyways. Go figure.

While the structure of this year’s ceremony seemed to value celebrities over promotion of the films, the main fault this year lay in the dumbfounding decision to mix up the order of the categories being presented. In what seemed like an effort to spice up the ceremony and build an emotional story arc, the Best Actress and Best Actor categories were moved to the end, switching with Best Picture. Although other switches happened, such as Best Director moving earlier and Best Supporting Actor later, the Best Actor change is the most egregious because it was obviously meant as a ploy to give the show a great ending. It was widely expected that the late Chadwick Boseman would win the award for his performance in the Netflix film, “Ma Rainey’s Black Bottom”—so much so that the entire ceremony was built around the moment, and Boseman’s wife was all prepared to give an emotional speech that would have closed the night. Instead, defying expectations, Anthony Hopkins won for his performance in “The Father.” While Hopkins is certainly deserving, it made the ceremony fall completely flat in the end, with Hopkins not present to accept the award due to him being in Europe and probably sleeping at the time. So, after the big buildup, Joaquin Phoenix gave a small speech about acting, talked about the nominees, notably without any clips, and announced that Hopkins had won before awkwardly saying that Hopkins couldn’t make it so the Academy would accept the award on his behalf. Then the broadcast just ended. At least we know that the awards aren’t rigged by the producers because this is so obviously not what they intended. In an attempt to cash in on Boseman’s passing and make a true “Hollywood ending,” the ceremony played the odds wrong and ended up fizzling.

So where do the Academy Awards go from here? Honestly, there isn’t much that can be done, though the right steps would be to focus more on the films and on keeping it streamlined. Unfortunately, it is very unlikely that will happen. Due to the negative backlash from this event, it is far more likely that the Academy will return to a safe zone, bringing back hosts, musical numbers, comedy bits and a more glitzy atmosphere. While this may be good in making audiences feel comfortable and safe, it ultimately isn’t good for the films themselves. Until the Oscars become more than a star-studded showcase and evolve into an actual celebration of the beautiful medium that is film, it’ll continue to flounder. It’s time for a reset.