Streaming recommendation of the week 5/7/2021 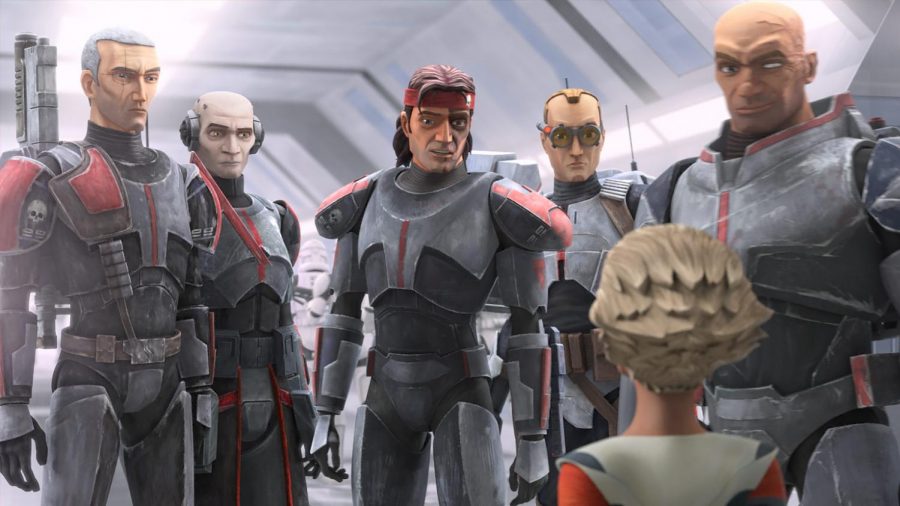 Courtesy of The Walt Disney Company

The Bad Batch, a clone trooper special forces unit made up of defective clones, takes Disney+ by storm.

Tuesday, May 4 marked the latest iteration of “Star Wars” Day, along with a “Star Wars” property unlike any other. Yes, as you might have heard, “The Bad Batch” is the new “Star Wars” show that is indeed a spin-off of a spin-off. That may sound daunting and full of corporate greed, and in a way it is, but it is also an essential pivot for the franchise. With 2019’s “Star Wars: Episode IX – The Rise of Skywalker” firmly in place as the final conclusion of the film series, the main “Skywalker Saga” storyline is now over. The series can truly go wild, filling in the missing pieces and giving new context to events.

The series has been using alternate media for years, like books and comics, in order to provide additional storylines inside the world many fans fell in love with. With the release of “Star Wars: Episode III – Revenge of the Sith” in 2005, concluding the prequel trilogy, the concept came into full form with an animated television series. “The Clone Wars,” which ran between 2008 and 2020, delivered new storylines set between “Star Wars: Episode II – Attack of the Clones” and the aforementioned Episode III, showcasing the titular conflict with much more detail. Throughout the show, viewers saw the “Star Wars” universe like never before. Every episode showcased new worlds, new conflicts and new characters, while continuing to develop the overall storyline established by the film series. Those wishing to learn more about the “Star Wars” galaxy got their wish, while those just looking for new adventures in the world also got theirs. The show also provided additional context around the actions of characters that appeared in the live action film series, such as Anakin Skywalker/Darth Vader and Obi-Wan Kenobi, developing their characters more and making their character arcs more thorough.

At the same time, what “Clone Wars” did that many people latched onto was showing the grand conflicts shown in the saga from a different perspective. By focusing so much on the clones that made up the army of the Republic, the series was able to show the epic war between good and evil from the viewpoint of those actually fighting it. With this “boots on the ground” perspective, the nameless soldiers fighting the wars among the stars are finally humanized and their actions become more valued. At the same time, this helped show how the actions of the main characters trickled down to the universe at large, further developing a deeper lore while making it more relatable. This is the same reason the new live-action “Star Wars” show, “The Mandalorian,” works so well. By giving us a view of the galaxy from the layman’s perspective, we are able to appreciate it even more while seeing new relatable elements.

“The Bad Batch” aims to do the same, directly following up the events of “The Clone Wars” and “Revenge of the Sith” and showing their direct impacts on the titular group. These characters are a squad of clone troopers, initially introduced in Season 7 of “Clone Wars,” who are genetically mutated to have special traits and less programmed obedience. As such, when the order to kill all the Jedi arrives, as seen in “Revenge of the Sith” and the final arc of “Clone Wars,” they don’t comply and are confused as to why the Galactic Republic they were fighting for is now transitioning into the Empire seen in the original trilogy. The pilot episode really delves into that transition, showing how the change villainized all the clones we came to love during the animated series, as well as the politics around the situation.

After squad leader Hunter refuses to kill a Jedi padawan, and the group as a whole sees the horror of the Empire’s brutalities, they must all decide their new path in the changing galaxy. This is a basic storyline, but it is helped by the characters and interesting situations. The pilot seems to be aware that, as a spin-off of a spin-off, most of the people watching are probably already “Star Wars” fans, and thus delves right in, giving viewers a look at the early Empire while also providing a glimpse of a possibly compelling storyline in the future. The show has potential, with some mysteries and character dynamics that will hopefully pay off, even if none of it is necessarily essential to the core “Star Wars” storyline.

This sort of connective tissue is completely superfluous, but once again helps to fill in some of the lore. With the main saga now complete, this is probably what the future of “Star Wars” will be: spin-offs upon spin-offs, adding additional context and showing how the events of the main films played out across the rest of the galaxy. We’re already seeing this strategy play out with “The Mandalorian,” which aims to develop the gap between “Star Wars: Episode VI – Return of the Jedi” and “Star Wars: Episode VII – The Force Awakens.” The show itself will have a myriad of spin-offs coming from it, including “The Book of Boba Fett,” “Ahsoka” and “Rangers of the New Republic.” All this aims to create a more in-depth universe, where interesting stories are always happening, even if the main “Skywalker Saga” has ended. Whether this strategy will pay off remains to be seen, but I have a good feeling about it. By hooking casual viewers with the main films and “The Mandalorian,” Lucasfilm can now deliver avalanches of content, ensuring there is always a “Star Wars” story worth telling inside their grand framework.

While “Star Wars” may have just started out as a sci-fi space opera film in the ‘70s, it has evolved into something much bigger. We shall see if the Force is still with the media juggernaut as it continues.