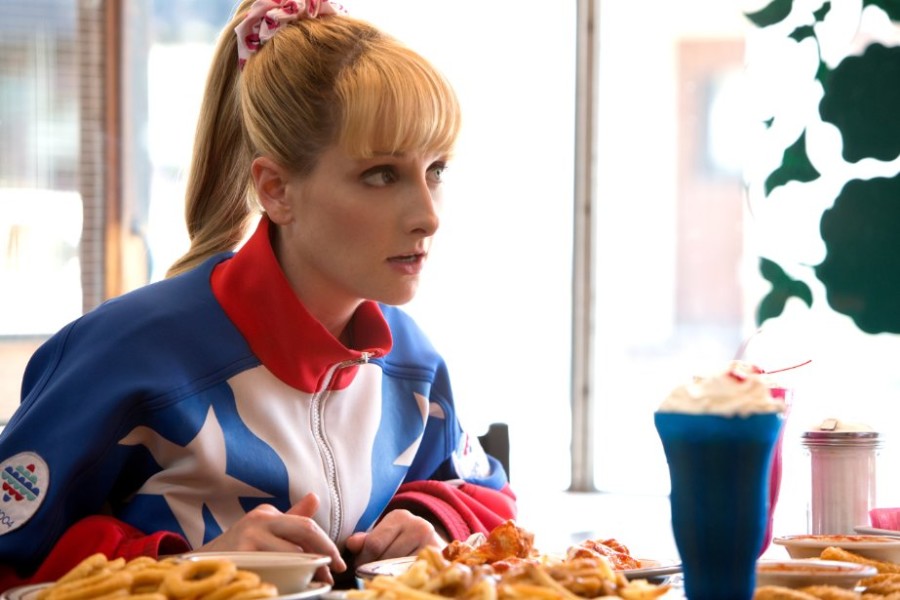 Melissa Rauch plays a whiny Olympic medalist who is the star of her small Ohio town.

“The Bronze” is not a movie that would appeal to most people for two reasons. One is that the subject matter, professional gymnastics, isn’t the most popular sport in the modern world. The other is that the setting, the small town of Amherst, Ohio, plays such a prominent role in the film that the film practically caters to citizens of the city and not many others.

I’m no gymnast, but I am from Amherst. This was the biggest reason I wanted to see the film—not for its now well-known gymnast sex scene, not for its deadpan humor. I wanted to see my hometown, with a population of just 12,000 people, projected on the big screen.

And in this way (and perhaps only this way), the film truly did shine.

The date scene that took place inside Midway Mall made me laugh not because of the stupid jokes Ben (a very twitchy Thomas Middleditch) told to Hope Anne (Melissa Rauch), but rather because I know for a fact that a Sbarro’s would never open in the dying mall’s food court.

The montage of Hope Anne and Maggie (Haley Lu Richardson) stuffing their faces with fried food outside Hastee Tastee was all the more joyful when I remembered visiting my friends over the summer at the same ice cream shack.

Even simple cuts to a sign on North Lake Street brought back memories of bike rides to visit my high school boyfriend before I had a driver’s license.

Maybe these memories are what make me a biased reviewer, but at the same time, the role Amherst played in the film was important. I have a feeling that if you asked any Amherstonian how they felt about the film, it would be different from someone who grew up in a different city.

This must be a phenomenon in filmmaking; I wonder what all the New Yorkers feel like when film after film comes out, each made in their neighborhoods.

Anyway, the “big star in a small town” theme made up most of the film’s plot. Hope Anne would have lacked serious motivation for her grating, and at times, overwhelmingly bitchy behavior, if no one cared about her Olympic bronze medal. Without Amherst “Community College” acting as a backdrop to Maggie’s mother’s (Cecily Strong) work, no one would have felt sympathetic to the family’s struggles. Simply put, without the tiny town aesthetic, “The Bronze” would have been a completely different movie.

That doesn’t mean that the film always gets this aesthetic right.

Hope Anne’s ridiculous accent, for one, seems completely out of nowhere—it’s as if a Minnesotan accent and a Cleveland accent had a baby, and that baby decided to whine for 108 minutes straight.

Also, while filmmakers certainly emphasized the small town-ness of Amherst, they did it to an extreme. First of all, when they reimagined the town to have a community college and to have a mall in the center of it, this signals an even bigger population than that which Amherst actually has. Why would a town of that size be so obsessed with a bronze medalist from 10 years ago? I think very few towns would see a character like Hope Anne Greggory as anyone particularly special, let alone a star.

The ending of the film tried to make jokes that weren’t especially present during the actual plot. When Maggie got knocked up by Lance (Sebastian Stan), it made no sense with her previously kind and careful character. When Stan (Gary Cole), Hope’s father, went on to make yet another joke about a fish, it felt utterly irrelevant.

The truly memorable parts of the film were the small, daily moments spent in Amherst that made fun of hometown America, not the moments that tried to do anything bigger.