The Dangers of the Past 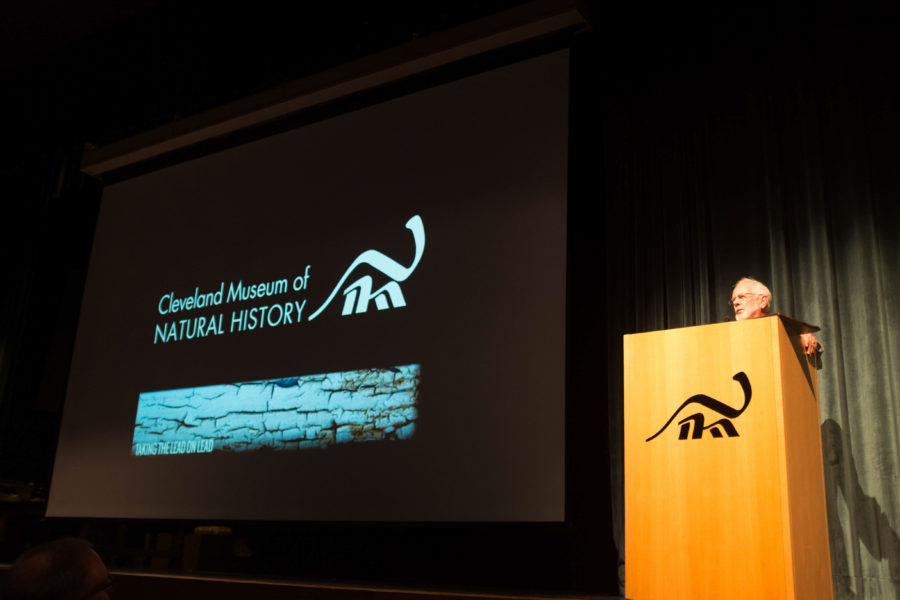 One of the speakers is presenting to the audience the danger of childhood lead poisoning.

Only a five-minute walk from campus, the Cleveland Museum of Natural History (CMNH) was undergoing renovations. On the exterior a transformation to the future was visible, but on the inside people were gathered to fix the errors of the past.

Photos of carefree children were scattered throughout pamphlets and brochures in the halls of CMNH on Sept. 1. These photos were not placed for a new exhibit; they were here due to an issue prevalent since the industrial revolution.

The event description read: “‘Taking the Lead on Lead’ aims to unite the public, doctors, scientists, policy makers and policy implementers,” and it indeed gathered a mix of people with different backgrounds, ages and professions filled with the same passion for this event.

A mixture of vague memories compromises public knowledge surrounding lead. Students may remember listlessly staring at the periodic table. “Pb,” an elemental symbol with its entomology traced back in distant history. The people at this talk had other memories.

The disaster at Flint, MI, was a thought hanging in the air. In Flint, drinking water is contaminated by the lead from the pipes. But in Cleveland, there is no single culprit for its source. Several people could be heard talking about their speculations of it on human health before the talk.

As the crowd politely shuttled into the auditorium, the CMNH Curator of Human Health and Evolutionary Medicine Dr. Nicole Burt could be seen watching over everything with a keen eye. Tonight was the fruition of her planning at the museum. Seated in the first row were several members with a distinctive air to them. For them this was not simply an interesting discussion, but rather a topic so much more significant. They were the speakers.

With a subtle acknowledgment, the moderator, Dr. Dorr Dearborn, walked to the stage. A man of knowledge and a public health advocate, he conveyed an air of calmness.

His impressive title preceded him, Dearborn took the stage with a smile. Once on the stage, his content demeanor turned solemn. His cordial smile fell as he started to speak. He was here for a purpose. The atmosphere turned grim as the moderator eased the audience into the depths of the situation. Slide after slide of graphs, pictures and text appeared one after the next. No one slide or fact was overwhelming on its own, but the cumulative effect was haunting.

Children exposed to lead have a higher rate of school failure due to developmental delays caused by the lead. These children are most commonly raised in poorer areas. They are the ones that can slip through the cracks.

Dearborn introduced the next speaker, Terry Allan, health commissioner at the Cuyahoga County Board of Health. Allan’s words amplified the point Dearborn was making.

“There is no safe level of lead.”

These grim words appeared in bold on the screen. Allen acknowledged the progress made nationwide, while imploring more efforts in urban communities.

“We really need to see what we can do and dig deep in this issue, for the kids.”

This time, the cliché rang true. Children have the highest risk of damage due to lead toxicity. Their still-developing organs combined with a higher digestive absorption rate puts children in a vulnerable position.

Merle Gordon was the next speaker. As the director of the Cleveland Department of Public Health, she continued the discussion with an explanation of the efforts already underway. She explained how the houses with lead are tracked and monitored. However her message was still bittersweet.

“The programs are great, and welcomed, and needed, but can only go so far.”

The keynote speaker was now on stage to offer a national perspective. Dr. Mary Jean Brown was introduced as the former director of the Office of Healthy Homes and Lead Poisoning Prevention within the Center of Disease Control.

Brown’s presentation opened with a picture of Florence Nightingale, a fitting parallel from years past. She implored the audience, explaining that Nightingale took a stand against the unsanitary and dangerous environment that the ill were kept in. Her message was clear: We must do the same for the children at risk for lead poisoning.

When describing the lives of those living with lead poisoning, Brown sadly stated, “That’s the tragedy of lead poisoning in the United States. Life is going to be harder for those children.”

Her presentation continued to highlight all the developmental disorders that lead can result in, such as deficits in various abilities including speech, impulse control, reading, activity levels and learning. Lead is contained in minute quantities in a variety of products, but according to Brown, “It all adds up.”

A map of Cleveland is painted on screen with gradients of vivid reds, but this is not a pretty picture. Some areas have children with blood lead levels 16 times the state average. Many areas are within walking distance from Uptown.

“The people the most at risk still had a high risk…We need to do more.”

The address to the crowd was concluded with a final message: “We’re on the way. We’re not done yet. And we may never be done, but the next ten years will determine how far we go given this problem.”