The Diamond of Netflix: “Bridgerton” and its Regency-era love story

Streaming recommendation of the week 2/5/21 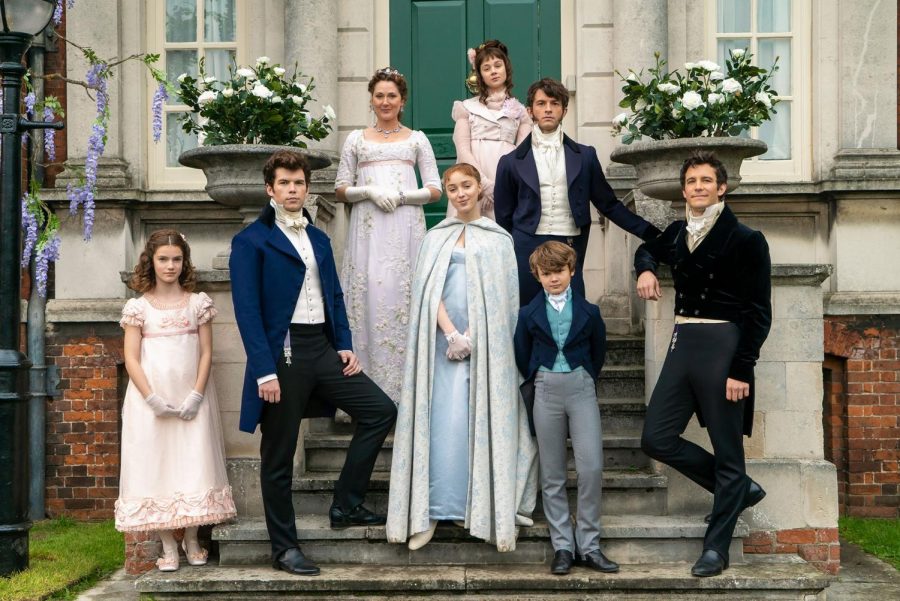 Lose yourself in the romance and drama of "Bridgerton."

In a craze reminiscent of the release of “The Queen’s Gambit” and “Outer Banks,” the Regency-era Netflix show “Bridgerton” has captured the hearts of romantics and history fanatics alike. Coming from the mind of executive producer Shonda Rhimes, “Bridgerton” is filled with tumultuous love affairs set against the tropes of a period drama.

The “Bridgerton” book series by Julia Quinn is a series of eight novels that follows the lives of the eight children in the Bridgerton family. This season of the show focused on Daphne Bridgerton, the fourth child and eldest daughter, beginning with Daphne’s entrance into society as a young lady open to entertaining suitors, with the goal of marrying above her station in society and into more wealth than she already possesses. Methods of showing romantic interest in this era differ greatly from the current day and age, creating many suspenseful interludes where anything from holding hands to a kiss outside of marriage is a near scandal.

Enter Lady Whistledown, the elusive writer of a widely distributed column that details her thoughts on the society season of lavish balls and parties, its players and its matches. Voiced by Julie Andrews, the words of Lady Whistledown can build or destroy reputations. Every action of the young women in the surrounding society is intended to impress Lady Whistledown, as her opinions have direct consequences on courtship potential. Her recognition of Daphne as “The Diamond of the Season” launches her headfirst into high society as a desirable match.

At one of her very first balls, Daphne runs into Simon Bassett, the Duke of Hastings, a man with the assets and looks to attract anyone he desires. The two begin to get to know each other, and find that the combination of their ambitions present an advantageous opportunity for the both of them. The Duke doesn’t want to marry, but must seem to be courting in order to appease his grandmother. Daphne, on the other hand, has an intense desire to marry far above her station. On the arm of the Duke, she would become exceptionally more desirable. Together, they begin their ruse.

Through misunderstandings and heated conversations, their love grows in a way that is both frustrating and enthralling for viewers. With an ending that many had nervously hoped for, the story of Daphne concludes and we’re left with the promise of another Bridgerton love story.

Since its debut on Christmas Day, nearly half of Netflix’s subscribers have watched the show, making it one of the most viewed shows in the platform’s history. The show has single-handedly launched its lead actors, Phoebe Dynevor, who plays Daphne, and Rege-Jean Page, the Duke of Hastings, into international stardom. From suspicion of a real life romance to questions about their lives before the show, Dynevor and Page have each garnered a massive fan base similar to the sudden stardom of Anya Taylor-Joy, who plays Beth Harmon in “The Queen’s Gambit.” Hoping to capitalize on this success, Netflix has promised eager fans that a second season, and possibly six more after that, are in the works.

“Bridgerton” presents a world so far removed from today that viewers can find comfort in the subtleties of language and touch, the frivolity of mothers wanting nothing more than a fortunate match for their children and the spinning of dresses during waltzes to classical renditions of pop songs by Ariana Grande and Taylor Swift.

In a time filled with technology and separation from loved ones, “Bridgerton” brings a welcome escape to the closeness of a family and a quest towards love, themes that will certainly captivate audiences for generations to come.