The end of a summer at Severance 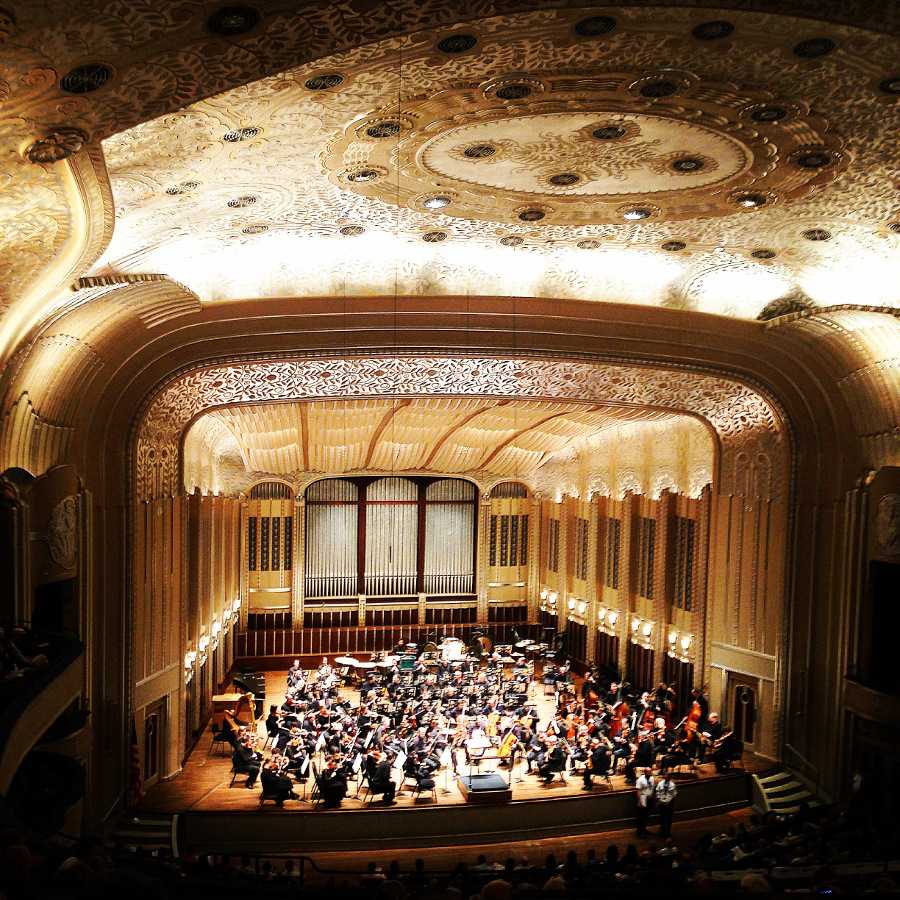 Severance Hall's performance was the perfect precursor to a school year filled with music. Mike Suglio/Observer

As the gentle and warm summer ended, so did the Friday night Summers@Severance series. Throughout the month of August, the Cleveland Orchestra provided an intimate musical experience both in the hall and on the front terrace.

At the last show, which was on Aug. 29, the evening began with a special happy hour on the front terrace where music lovers enjoyed some cool drinks and conversed about the perfect Cleveland summer weather. At 6:50 p.m., patrons moved from their drinks to their seats in the glistening hall.

Promptly at 7 p.m., Music Director Franz Welser-Möst joined the awaiting orchestra as the entire hall applauded. Welser-Möst now begins his 13th season as director, which will extend through the Orchestra’s centennial in 2018.

The evening began with composer, Jörg Widmann’s “Lied.” The Munich native was commissioned to work in homage to Franz Schubert, but chose to take a modern take; the music’s loud melody met a soft harmony in the background.

Throughout the piece there was a strong and vibrant violin section followed by an equally powerful saxophone accompaniment with an occasional bang from a gong. Often the song flew from almost total silence to a loud roar.

Widmann’s second piece of the evening was “Flute en Suite,” which featured principal flutist, Joshua Smith. Head of the Cleveland Institute of Music’s flute department, Smith has been nominated for a Grammy and just recently released an album recorded at Cleveland’s Happy Dog with his group, Ensemble HD.

Similar to Widmann’s last piece, this work also took a modern look at older music. He was inspired by classical dance music and instead changed it to a more serene and mellow sound. Smith’s flute was the melody of the piece, acting as the dance element.

The flute and violin section harmoniously played alongside each other with an occasional interruption by the wonderful xylophone. The piece ended with a switch to traditional and lively “Flute en Suite” sound, which the audience laughed and cheered to.

The Cleveland Orchestra continued entertainment through the intermission by having the Cleveland Cavaliers’ hip-hop team perform in the hall. Even though the music before this break was more modern, this had to be the craziest part of the night; the dancers energized the audience into the second half of the evening with flips and windmills.

Finishing the evening was Symphony No. 1 in C minor, Opus 68 composed by the great Johannes Brahms. I closed my eyes as I took in this classical symphonic piece. As the string section strutted in unison and the brass section blew a powerful musical breeze, I felt the Cleveland Orchestra’s good vibes.

With a powerful finale, Welser-Möst took a bow to grand applause. The orchestra then continued to play additional music, not originally included in the program, as an encore.

After the music ended, patrons on a music high danced out to the front terrace where they enjoyed even more cool summer drinks and music on a warm summer evening.

Though this may be the last performance in this special summer series, Severance Hall’s school year shows are highly anticipated, featuring music from the likes of Chopin, Beethoven, Bach and Schumann.