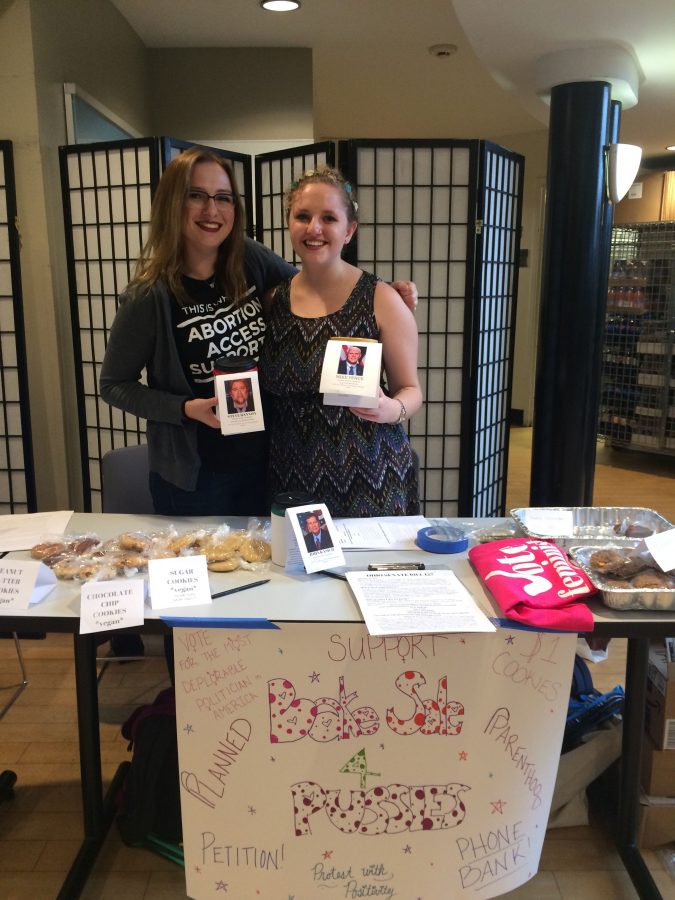 The Feminist Collective at CWRU recently hosted a bake sale to raise money in support of Planned Parenthood. The money collected will be donated on behalf of Vice President-elect Mike Pence.

On Nov. 30, the Feminist Collective at Case Western Reserve University (FCC) held a bake sale that raised $320 for Planned Parenthood, which, based on their contributors’ preferences, they plan to donate on behalf of Indiana Governor and Vice President-elect, Mike Pence. The organization also offered petitions from the American Civil Liberties Union (ACLU) of Ohio and NARAL Pro-Choice Ohio to sign in opposition to Ohio Senate Bill 127. Members also handed out phone scripts to lobby Ohio House Representatives Timothy E. Ginter, Chair of the Community and Family Advancement Committee, and Anne Gonzales, Chair of the Health and Aging Committee.

Following a national trend, the FCC is donating to Planned Parenthood on behalf of Pence, who has criticized the organization, so that the receipt of the donation is sent to the governor. Planned Parenthood joins others statewide in opposing Ohio Senate Bill 127, which, if passed in the Ohio House of Representatives, would prohibit abortion after 20 weeks of pregnancy. This opposition has also spread to House Bill 493, also known as the “Heartbeat Bill,” which would narrow the time window for abortions to approximately six weeks.

During the four-hour sale in Nord Hall’s Atrium, the FCC offered three jars, each assigned to a national figure, for contributors to choose from. Pence was subsequently chosen, as the jar assigned to him received the most money. The jars designated to Ohio Governor John Kasich and soon-to-be Chief Strategist and Senior Counselor for President-elect Donald Trump, Steven Bannon, collected about $80 each. The FCC set the cost for a cookie at $1, although the organization’s members noted that many people donated more on top of their purchase.

The FCC wasn’t sure how many contributors actually made use of the phone scripts, but they were able to hand out all 60 scripts printed. They estimate that nearly 50 people signed the petition. The FCC spent about $32 to bake a total of 150 cookies. A woman, unidentified as of press time and not a CWRU student, donated another four trays of cookies to sell.

To FCC Secretary Nailah Mathews, Planned Parenthood is important because of the examples she has seen in her family; both her parents are lawyers and have worked for various relevant causes.

The idea for the bake sale was developed by Hamilton and general body member Natalie Bick as a response to the results of the national election. They had worked together earlier in the semester to register voters for the election as part of the Feminist Majority Foundation, a nonprofit that promotes non-violence and the advancement of women.

“We were feeling really frustrated because we worked so hard to try to spread feminist issues and get people to vote in a feminist fashion,” Bick said. “We felt very inactive. We felt very powerless.”

FCC Vice-President Jessica Lam explained that they had received a large amount of negative comments on Facebook from persons who were not CWRU students, but part of the nearby community. Lam saw accusations such as “this holocaust organization doesn’t need your goodies” and “you baby killers.” She deleted whatever she was able to on Facebook, and, despite these online protests, the organization didn’t see any criticism in-person during the sale.

The group members are excited for next semester, when they will host the Genital Monologues, an amended version of the group’s traditional Vagina Monologues event.