The first 2020 presidential debate unites many different groups in protest 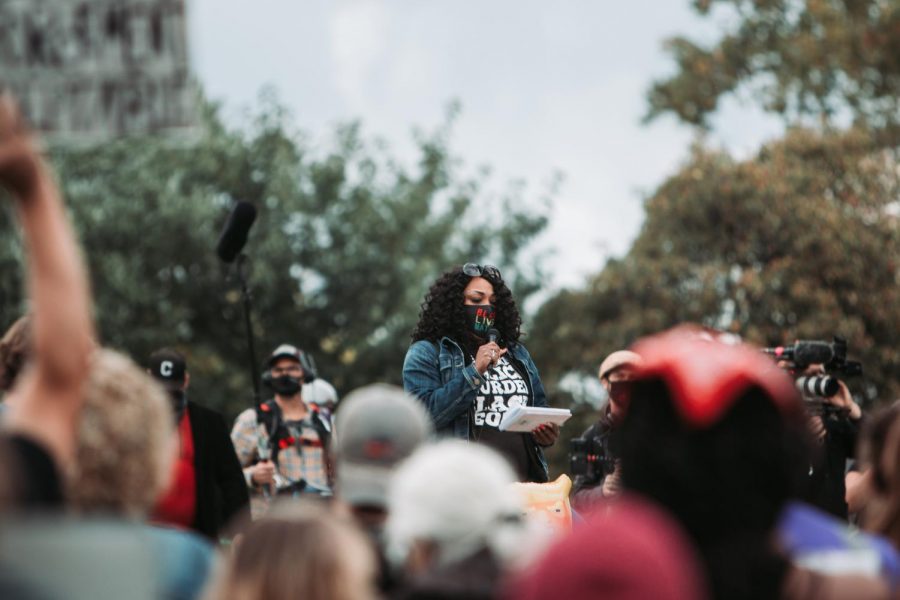 At 5 p.m. on Tuesday, Sept. 29, hundreds of people gathered on the field in front of Wade Lagoon to protest before the first presidential debate of the 2020 election. While a great variety of issues were protested at this debate—everything from police brutality, to climate change, to President Donald Trump in general—what united these protestors was a desire to enact change.

People of many different ages and political groups came to the protest, which was an amalgam of several events organized by Black Lives Matter (BLM) Cleveland, the Sunrise Movement and students from Case Western Reserve University.

“I’m here because I think that a lot of attention has come to Cleveland at this point, and I think that we should be able to use this attention to get our message across,” said Sedona Jolly, a first-year CWRU student who attended the protest.

At the event, organizers handed out pamphlets teaching protestors about their rights and encouraging them to make their voices heard in the upcoming election. A number of speakers from many different groups also gave impassioned speeches to the crowd about police brutality, systemic racism and other issues present in America’s government.

Christine Stonebraker-Martinez, a speaker at the event, is the Co-Executive Director of the InterReligious Task Force on Central America and Columbia, an organization founded after CWRU alumna Jean Donovan and Ursuline Sister Dorothy Kazel were murdered by U.S.-funded troops in El Salvador in 1980. The group, which focuses on educating people in South America to advocate for their rights and civil liberties, came to Tuesday’s protest to support the work being done at the event.

“We are in deep partnership with organizations like BLM and Black Spring Cleveland and Sunrise Movement,” said Stonebraker-Martinez, “and so we support each other, because we believe that civil disobedience is really … important to participatory democracy.”

Eileen McCully, a member of the Coalition to Stop the Inhumanity at Cuyahoga County Jail and of Resist Operation Relentless Pursuit, also attended the protest as an organizer. Both of these groups focus on pushing reforms in the criminal justice system—the former pushes for bail reform in the Cuyahoga County Jail, and the latter works against efforts by the government to track down and arrest parolees. She described the debate’s turnout as “heartening,” and encouraged students at CWRU who are interested to become involved in one or both of these organizations, which can be found on Facebook.

Accompanying this gathering of various civil rights groups, students and citizens was a heavy police presence. Police vehicles lined the streets around Euclid Avenue and the site of the protest, and helicopters and drones flew over the crowd. Additionally, the City of Cleveland released a list of items, including firearms, bags exceeding a certain size and canned goods, which were to be prohibited from the debate zone and the surrounding area, including the site of the protest. McCully expressed strong feelings about this, stating that it was “an attempt to muzzle any sort of protest.” However, the protest continued despite the presence of police, and remained entirely peaceful throughout its duration.

Around 6:55 p.m., the protestors marched around Wade Oval, with the crowd returning to the lagoon and largely dispersing around 7:30 p.m. The protest truly showed Cleveland’s commitment to creating change and how this commitment is capable of uniting people of all backgrounds and beliefs.

Stonebraker-Martinez encourages CWRU students to take action on the issues they care about, calling for them to “[not] let [themselves] be silenced by the ivory tower.”

Events such as this one show the power of taking collective action and should encourage CWRU students, whatever their stance may be, to fight for what they believe in.