“The Irishman,” and the state of film 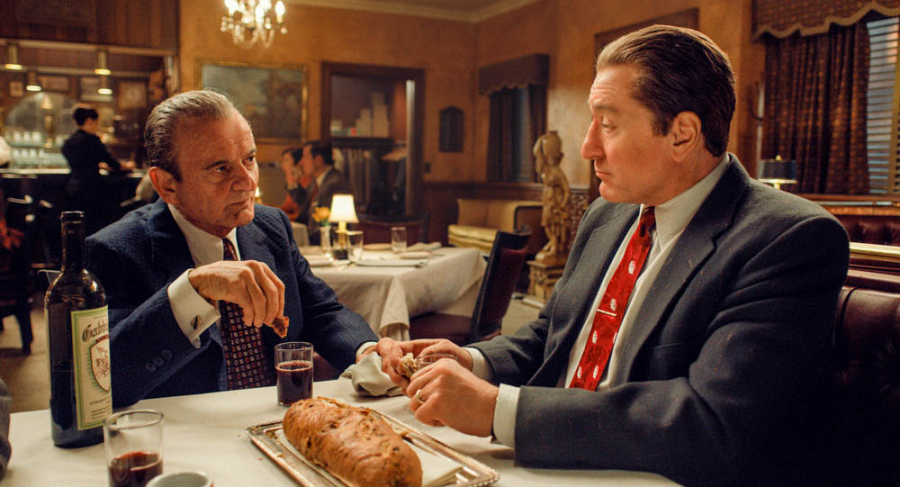 Frank Sheeran and Russell Bufalino eating at the restaurant where Sheeran meets his second wife, who is their waitress. Courtesy of Netflix

What is cinema? In an age where movie theaters are dominated by reboots, superhero movies and continuations of decades-old franchises, the must-see movies seem to have become these event films that have to be seen on the big screen in order to avoid spoilers and appreciate the spectacle.

Two thousand nineteen was the year with the highest-grossing movie of all time (unadjusted for inflation), the 22nd Marvel movie “Avengers: Endgame,” the highest-grossing animated film, the new remake of “The Lion King,” and the conclusion to the 40-year-old “Star Wars” saga, “Episode IX: The Rise of Skywalker.”

These are the films that dominated the box office, along with other remakes of Disney classics, like “Aladdin,” animated sequels like “Toy Story 4” and “Frozen 2” and other Marvel movies like “Spider-Man: Far From Home.”

With all that in mind, it’s easier to understand prolific director Martin Scorsese’s frustration at the movie industry and his statements that Marvel movies are “not cinema,” but rather “theme parks,” and that superhero movies aren’t “the cinema of human beings trying to convey emotional, psychological experiences to another human being.”

In his eyes, the film industry and the films that make it up are safe, and all sanctioned by corporations: “market-researched, audience-tested, vetted, modified, revetted and remodified until they’re ready for consumption.”

While many could find flaws in his argument and logic, as well as how he defines “cinema,” he is not entirely mistaken in the fact that original films have not been very successful in recent years, with the space for auter-created films in the theaters shrinking.

It is then not surprising that Scorsese’s new three-and-a-half hour crime opus, “The Irishman,” was not picked up by any traditional studio, and only had a limited theatrical release, but was developed by Netflix and released there later on, as part of its gambit to become a major prestige motion picture studio.

It is also somewhat ironic that Scorsese’s latest release was on a streaming platform, an act that other film directors, such as Steven Spielberg, might consider disqualifying of being real cinema as well, since it only had a limited release. However, it seems his peers at the Academy don’t agree, with the film receiving 10 nominations, though the number of wins remains to be seen.

If this is Scorsese’s answer to what cinema should be, regardless of the medium it was distributed in, it’s a pretty good one. The latest of Scorsese’s mafia movies, the film takes place in the shoes of mafia hitman Frank Sheeran (Robert De Niro), who refers to himself as a “house painter,” due to the blood of his victims hitting the walls after being shot, and follows his journey as he rubs shoulders with famous mobsters and union officials.

If any mob film qualifies as an epoch, this one should, as it spans through decades and portrays the heyday of the mafia’s massive control over American politics and culture.

Using de-aging CGI technology, De Niro and the rest of the cast go through time together, as the film’s series of interconnected flashbacks lead to a stirring mission. We can see Sheeran’s relationships with mobster Russell Bufalino (Joe Pesci) and Teamster President Jimmy Hoffa (Al Pacino) develop through the years and the impact of their crimes on them over time.

Despite this sweeping scale, this is Scorsese’s most thoughtful and reflective movie yet, as it strips away the grandioseness of mafia life, as seen in previous Scorsese flicks like “Goodfellas,” instead settling in a more down-to-earth lens.

Through Sheeran’s eyes, the film reckons with aging, pain, loss, suffering and the true meaning of loyalty. Less concerned with the ethicality of his actions, until the end, Sheeran is more of a blank slate which history moves along, coerced to commit hideous deed after hideous deed while the world spins around him.

Rather than portraying a high-level mob boss and making a grand statement on the meaning of America, like the quintessential “Godfather” trilogy, “The Irishman” shows the effects of the brutality on lower-level mobsters and their lives.

The interplay between Sheeran, Bufalino and Hoffa makes for the most intriguing moments, as they all reckon with the state of the mafia and the country shifting beneath their feet.

With this star-studded cast, the most heart-wrenching moments happen in the quiet glances.

In one particular scene, during Frank Sheeran Appreciation Night, Peggy and Hoffa dance together; the anxiety of the scene is palpable as Peggy slowly realizes something is afoot. As the old standard, “Spanish Eyes” plays in the glitzy ballroom, the tension is overwhelming as she observes the strain of the stares and dead eyes from Russ and other mobsters at Hoffa.

With a plethora of moments like these, the tense glances and reactions between the actors drives the film forward, creating a stirring picture that dwells on the waste of humans, but also the delicate nature of souls. I think that’s a pretty good answer for what cinema is, or, at least, what it should be.