The lessons of Warped Tour 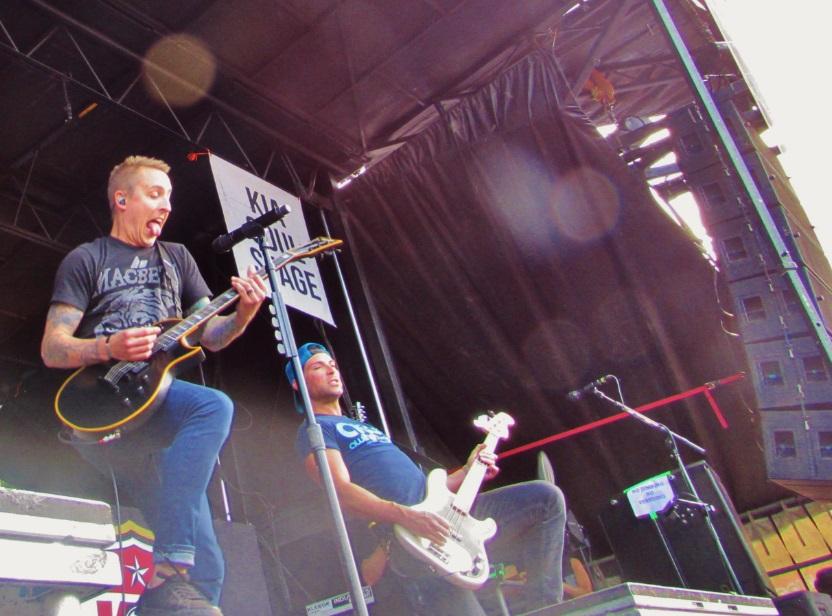 Yellowcard performs as a headliner at Warped Tour 2014, which swung by Blossom Music Center on July 17.

Each band had only 30 minutes to showcase what it stood for.

Each song was chosen wisely, each joke cracked quickly, each conversation clipped short, as the bands carefully used their handful of time onstage to make a mark.

And it forced the audiences to pay attention.

There were still plenty of punks and scenesters―when trying to keep track of purple hair-dye jobs that waited in line, we lost count at 35.

Granted, that line was long. On the morning of July 17, Blossom Music Center was a popular place to be. Even the line to obtain “skip the line” wristbands was at least a 10 minute wait.

But concertgoers stood patiently, inching forward on sidewalks and hills which were already filled with music.

For 20 years, Warped Tour has been touring across the country. Today, it stands as one of the only traveling music festivals to survive the rigorous summer schedule.

Despite hosting a different festival every day in a new city, Warped Tour doesn’t slack. The entire day was a whirlwind of music and sprinting between stages to catch the next big show.

Before it was even time for lunch, it had already been an eventful day. Crown the Empire’s metalcore show had a dense crowd which sang along to “Voices” before the main chorus even hit. We Were Kids’ engaging banter on the tiny Ernie Ball stage saw a bra nonchalantly thrown into the air.

You know, the usual.

The real chaos broke out at Parkway Drive’s show. Singer Winston McCall started by leaning over the pit’s barricade, spewing difficult-to-discern metal lyrics at the crowd. Water bottles, shoes, a hat and cans flew up out of the moshing, which quickly grew into a huge circle pit.

Throughout the day, metal shows proved to be the most intense. Glimpses of the heavy music had me scurrying away from The Ghost Inside and Of Mice & Men’s powerfully haunting shows, which had the audience squeezing together like a vice, mosh pits breaking out at every turn.

As would be expected at Warped Tour, the moshing was a staple at even the less heavy shows. Even during Mayday Parade’s hippie-ish performance, the crowd sent at least a few surfers to the front, to be yanked out by security guards. “Take care of each other, and respect each other,” singer Derek Sanders said, before fixing his lion mane and launching into “Ghosts.”

However, the festival threw a few surprises out, as well; We the Kings saw screeching fangirls when they rolled out “Skyway Avenue” and “Check Yes Juliet.” If we weren’t at Warped Tour, I could have sworn it was a boy band on stage based off the crowd.

If anything, the tour’s greatest lesson at this point was to expect the unexpected. Maybe that’s why the crowd wasn’t flipping out when Yellowcard violinist Sean Mackin leaped backwards, completing a back flip before picking up a new song. Maybe that’s why they weren’t completely thrown off when members of Less than Jake joined Bowling for Soup on stage for an exclusive photo opportunity, complete with glam fashionista music. And maybe that’s why the crowd just kind of accepted Less than Jake’s shenanigans, which included t-shirt cannons, squirt guns and cheap inflatable toys durings its ska-filled set.

Not a single show at Warped Tour was typical. Nobody really wanted to leave early.

If a band only has 30 minutes, after all, it has to make its mark.

Some reporting and photography contributed by Robert Nickoloff and Josie Krome, staff reporter.