The Most Fabulous Story Ever Told arrives on campus 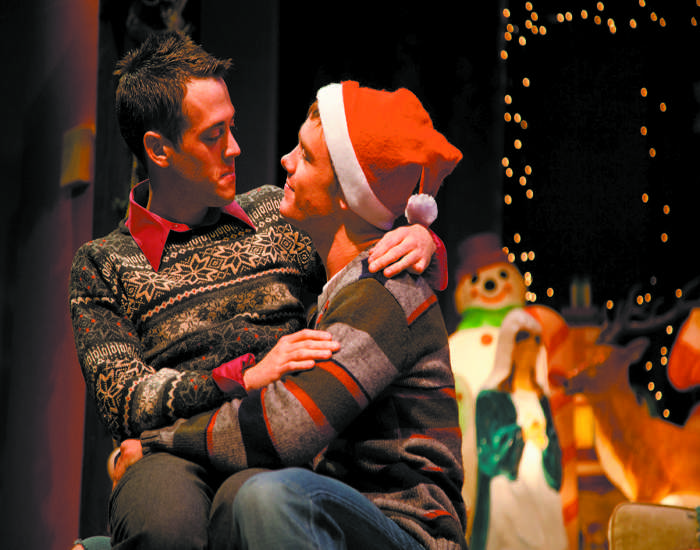 As an effort to support the opening and recent dedication of the campus LGBT Center in Thwing, the Case Western Reserve University theater department is currently performing The Most Fabulous Story Ever Told, its fall season play which will finish its run Oct. 10.

The play, written by Paul Rudnick and first produced in 1998, was chosen for its feasibility and its contemporary sense of humor.

The production finds comedy in its parodic approach to religion, while amusing references to popular gay culture manifest in the form of campy stereotypes and a soundtrack that features icons like Barbara Streisand, Cher, Madonna and Lady Gaga.

Stereotypes and camp were topics of discussion at the Q&A that was held after the Sunday matinee and featured the director, dramaturge, actors, and LGBT Center program coordinator Liz Roccoforte.

“Stereotypes exist because they’re true,” said Jensen, but added that they were a form of camp in the play. “Some people don’t get what camp is, necessarily. But the stereotypes, I kind of wanted to push them.”

Camp and satire are important devices for the production, the primary target of which is arguably Christianity. The first act presents a gay version of the Book of Genesis: Adam is created, knows immanently (and shamelessly) that he is gay, and meets Steve, with whom he enjoys a sexual relationship that is demonstrated unreservedly by actors Andrew Lund (Adam) and Matthew Mauer (Steve).

Jensen recalled an early scene in which Lund and Mauer must kiss, and said that although “we’ve come a long way,” there were still some male audience members who hid their eyes during the moment of male affection. He thinks they may have been students and fraternity brothers.

“This show is controversial and is going to push people’s buttons,” Jensen said. “But that’s the best kind of theater.”

Art of any form can be valuable in dealing with complicated social issues or taboos, said senior Brennon Ham. Ham is the public relations representative for Spectrum and a student assistant at the LGBT Center. “Aside from being a mode of self-expression, [art] is kind of a way for people to test boundaries,” he said. ”From the artist’s perspective, it’s a way to push boundaries. From the audience’s perspective, it’s a way to test them out and see if you’re comfortable with them.”

The role of the performing arts has been especially important in advancing acceptance and fostering mutual understanding among people of differing sexuality. Landmark plays like The Laramie Project and Angels in America, while perhaps too heavy-handed for a fall production at Eldred, have nonetheless epitomized queer theater and influenced much of Rudnick’s work.

As the first act progress in Eden, Rudnick departs from the traditional Genesis story when he has Adam and Steve confronted by Jane (Kelly Opalko) and Mabel (Hannah Cooney), lesbian lovers who cohabitate the garden. And in a reversal of traditional Christian gender roles, Adam gets the whole group ousted from the garden when he begins to ask too many questions.

His questioning is prompted by faux audience members, including a pastor and a gay rights activist. The scene produces a compelling moment of metafictive theater that Rudnick unfortunately fails to employ afterward, although an actress (Erin Wendell) playing a visible stage manager for the entire production provides a medium between audience and cast.

“Creation of the world: go,” she says at the beginning of the first act. All her lines are like this. Wendell’s character, sitting in a kind of mezzanine throughout much of the play, is both physically and dramatically removed from everything. She provides an analogy for (or alternative to) God, and links the space of the theater with something holy, affirmative and church-like.

It makes sense, then, that theater provided a sanctuary for Jensen when he was growing up.

“As a young person, it saved my life,” he said. “If I hadn’t been involved in music or theater in high school, I don’t know that I’d be here right now. I was growing up in Iowa in a really small town and had a lot of people that didn’t particularly like me because they thought I was gay. I didn’t know what I was. So it’s a powerful medium.”

After following the couples’ progress through wilderness, the Flood, and a trip to Egypt, the first act culminates in the implied birth of Jesus.

The second act then leaps 2000 years into the future, to present day America where modern lovers Adam and Steve are hosting a Christmas party and struggling to reconcile sexual identity and religious sensibilities. Jane is now pregnant with Adam’s donated child and Steve is dying tritely of AIDS. They are joined by Mabel and the rest of an ensemble cast that includes a gay Santa Claus, a crippled lesbian Rabbi, and a go-go dancing elf.

The climax is the birth of Jane’s baby, an evocation of Christ’s birth to the Virgin Mary.

The play has thus accumulated a history of controversy since its first production. According to Jensen, its early performances were often protested despite the fact that the outraged persons rarely saw the play for themselves. These persons included Catholic groups who felt the image of the Virgin Mary is defiled on stage when Jane gives birth.

“I think that there are certain people that won’t even come to the theater, and have a problem with it,” Jensen said. “And that, I always think, is troubling to me. Come see it and, you know, have a reaction and have a complaint about it, but only after you’ve seen it. You can’t complain about something you haven’t seen.”

That was over a decade ago. The play is not as controversial today as it may have been then, and some of its cultural references and dramatic tropes are dated or less significant now (Carol Channing and Steve’s AIDS, respectively), but its most important topics are still the subjects of frequent debate, including gay marriage and the relationship between homosexuality and religion.

“It still speaks to a lot of what’s going on today,” Jensen said. “I mean the fact that there are some states where gay marriage is legal and there some states where they have voted against it, Ohio being one of those places. The play talks to us about where we are and where we have yet to go to.”

Both the play and the LGBT Center dedication have coincided unexpectedly with several tragic cases of suicide by American youth who were struggling with sexual identity and bullying, including Rutgers University freshman Tyler Clementi.

The news, reported on heavily by the media, may have prompted a certain curiosity in Jensen’s production.

Interest has been substantial, with weekend shows playing to a packed house that left only standing room for those who arrived late. The Sunday matinee was less populated, though still well attended.

After the play, some commented on the positive portrayal of both homosexuality and its relationship with religion.

“This personal relationship with God transcended everything else,” an audience member said at the Sunday Q&A, noting that the play did not prescribe a lifestyle in which homosexuality and spirituality are mutually exclusive.

“A lot of people feel they can be religious or gay, like one has to be given up,” said Roccoforte. “But in the play, everyone deals with religion differently.”

Roccoforte added that much of queer theater engages with the prevalence of shame among those who are questioning or just discovering their sexuality, but that Rudnick’s play is, on the contrary, “really affirming.”

Affirmation has never seemed so necessary since news of the suicides.

“I think, hopefully, there are people that will see this play and maybe find themselves in it, or maybe realize that it’s not so hopeless,” said Jensen.

The same message is propounded by Spectrum, CWRU’s student group devoted to serving and providing social space for sexual minorities on campus. They plan to participate in Seattle columnist Dan Savage’s It Gets Better Project (IGBP), which involves a worldwide effort to create and collect YouTube videos of people assuring gay and troubled youth that life eventually “gets better.”

The project has involved many thousands of participants, including major celebrities.

“We’re trying to make our own, from our own perspective as college students and kind of reinforce the idea that it does get better,” said Ham. “That’s had a really successful response. We proposed the idea to Spectrum, the whole group, and they’ve been really wonderful about it.”

Ham said the LGBT Center will contribute by holding a candlelight vigil in the near future. He wants to see it function as an all-inclusive event that will “engage most of the campus” and “activate all our allies.”

For Jensen, the play is less about religion than it might appear to be. “I’ve already reconciled what I believe in,” he said. “It’s about the idea of what it means to be loved and to love somebody else, or to love somebody that’s unlovable—seemingly unlovable. Love is the ultimate message for me.”