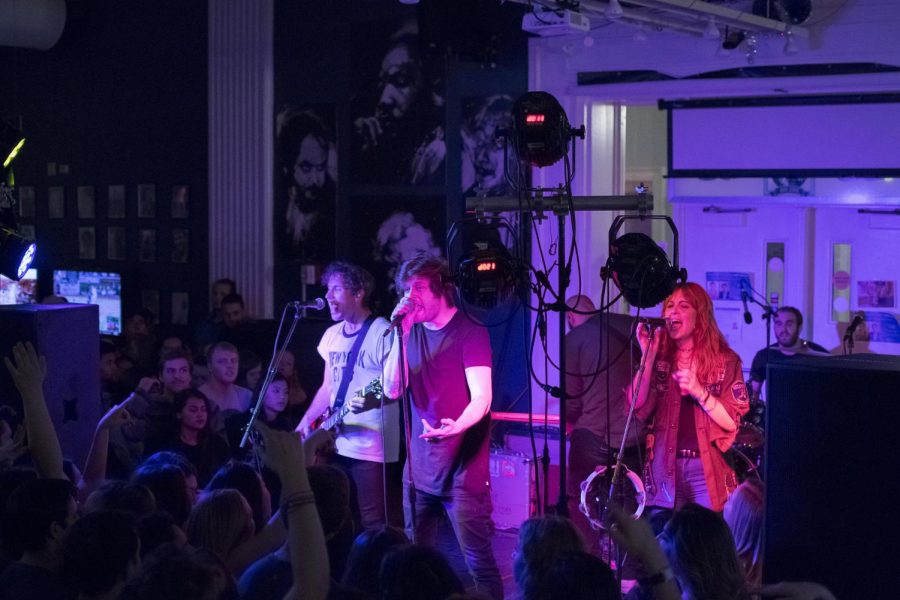 UPBeats: The Mowglis took over the Jolly Scholar on April 30 and was well attended, with about 500 students.

The Jolly Scholar was electric on Friday night as students lined up to take part in the good vibes brought to Cleveland by the Los Angeles band, The Mowgli’s. The excitement of the concert-goers was evident: While they waited for entry, multi-colored lights emanated from the Jolly’s windows and upbeat music carried through the walls into Thwing Atrium.

The tiny stage at the front of the bar was crowded on all sides by eager fans of the band. The Observer spoke with Caitlin Fernandez, Concerts co-chair for the University Program Board, who explained that The Mowgli’s made their Case Western Reserve University debut at Spot Night in 2013.

Fernandez was expecting a lot of excitement from CWRU students for the band’s return, but didn’t anticipate the massive crowd that came to the Jolly that night.

“This was one of the most well attended UPBeats we have had, with over 500 CWRU students,” Fernandez said. “It can be difficult to anticipate attendance for an artist, and even though we knew that this concert would be popular, we were not expecting such a huge turnout,”

This was my second time seeing The Mowgli’s perform. The band has a warm, inviting stage presence and knows how to get a crowd jumping up and down to both their hit songs and lesser-known tracks. Anyone who sees The Mowgli’s is in for a treat: Whether a fervent fan or newcomer, the cheerful lyrics and positive energy contribute to a wonderful concert experience. Friday’s concert, similar to the last one I saw, made many fans smile from ear to ear as they swayed back and forth to the tunes.

We could tell that the artists wanted us to “feel the love” as they sang along with the crowd to their well-known song “San Francisco.” Not only did The Mowgli’s play several of their top tracks, they also made a special debut.

As the cheers of the crowd died down, singer and percussionist Katie Earl excitedly announced a new release. She shouted, “You guys will be one of the first crowds to hear it—this song is called Kansas City!”

Before she could utter the last syllable, screams and applause erupted throughout the whole venue.

The band released “Kansas City” on March 23, 2018. The catchy chorus features a beat that everyone could bop their heads to, and by the second verse, we were all singing along to the melody. I’m always overjoyed to experience new music for the first time at a live show, and this instance lived up to my enthusiasm.

The uplifting performance wouldn’t have been possible without the hard work of Fernandez and her fellow UPBeats members. To continue the trend of growing student interest and outstanding turnout, UPBeats will be giving away 2 pairs of tickets to Odesza at Jacobs Pavillion on May 4.

“At The Mowgli’s, we handed out giveaway tickets to the first 300 undergrad students. In order to be entered into the giveaway, these tickets must be returned at our Blackbear UPBeats on April 6, and we will randomly draw [two] winners to each win a pair of tickets.”

For your chance to win tickets to see Odesza, be sure to “Tune In, Turn Up” for UPBeats this semester. Only undergraduate students are eligible to win.