“The Shannara Chronicles’” plot has heightened to new levels after ‘Safehold’ 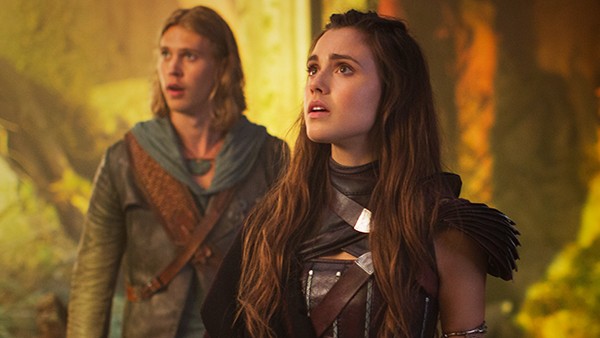 Each episode in “The Shannara Chronicles” seems to be outdoing the previous one in ways I would have never guessed. The plot, fantasy and characters keep getting more intricate, and I congratulate MTV on doing such a great job producing the show.

The main focus of this episode centered on our band of travelers finally making it Safehold (actually just San Francisco and Oakland with a few missing letters), bringing all the intensity of such an important moment. From sneaking past trolls, to battling the Guardians of the Bloodfire, there was never a dull moment.

Surprisingly enough, Eretria (Ivana Baquero) was key to the group’s success. Her blood was literally the key to opening the Bloodfire. The more were learn about Eretria, the more fantasy we are exposed to and the more we learn about the human race. She is more than just a normal human as her magical tattoos and visions suggest.

As for Amberle (Poppy Drayton), who knows what is in store for her after jumping into the Bloodfire that seemed to teleport her somewhere. There is so much new fantasy and world building going on, and while sometimes complexity can take away from stories, it is only making this one better. The complex nature of the journey and fantasy combined with dystopian just draws the audience in and keeps them coming back for the next episode.

On the other front, King Ander (Aaron Jakubenko) is already proving himself a better ruler than his father. He has successfully stopped an elfish civil war and has formed an alliance between the elves and gnomes against the Dagda Mor (Jed Brophy). This might not be good enough though. The last leaf has fallen and now the Dagda Mor is free with a huge army of demons behind him. He has the power to do a lot of damage as we have seen with his mind control of Bandon (Marcus Vanco), the Druid in training. Hopefully Allanon (Manu Bennett) will be able to control Bandon and help lead the free lands against the demons.

I’m hoping the finale next week delivers a lot of information and elements we didn’t get this week. At the very least I would settle for an epic battle.