“The Shannara Chronicles” ‘Utopia’ Review: One eye roll after another 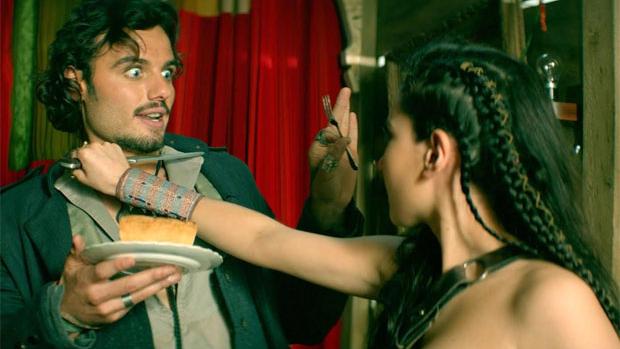 Last episode of “The Shannara Chronicles” I was curious to learn more about the human race and how it was almost entirely wiped out. While this episode delivered some of the information I wanted, it just left me more curious than ever and slightly annoyed.

Unlike other episodes, there was less emphasis on the fantasy aspects such as going against the Dagda Mor (Jed Brophy) and more on Eretria (Ivana Baquero) and the human race after the Elf Hunters sell her to a human utopian society.

In this utopian society, everyone believes the human race is superior to the others and that mankind will rise. They speak of man going to the moon and skyscrapers and I can’t help but wonder how this is not known fact. How long ago was this disaster that this society thinks of skyscrapers are science fiction and lives like they’re in the 1800s, besides the fact that they throw raves like it’s the 1980’s?

Actually, the entire settlement is very like a hipster group that spends their days acting chill and parties to record players at night. Except unlike most hipsters, their goal for the future is designed after the original “Star Trek” and they have guns, which somehow all of our characters become pros after having just holding them.

This entire situation just left me rolling my eyes one minute after the other. From the way the hippie society behaved to the clichés they used to draw Eretria in, it was just ridiculous. It doesn’t help that the love triangle has thickened to the point of being almost unbearable.

Wil (Austin Butler) and Amberle (Poppy Drayton) are bent on finding their friend; that is until they remember the last time they kiss and decide to have a heavy makeout session when in troll country. Despite this, Wil still gets jealous when he sees Eretria dancing at the hippie rave with another guy.

The bright light in this episode was Ander (Aaron Jakubenko), who thankfully decided not to throw away the throne and became king. I’m interested to see how he behaves as a king and what his plans are. Hopefully he isn’t as foolish as his father and brother. Also, we finally saw the remains of the human world, in the form of a broken down San Francisco in the distance. Hopefully this means we’ll get to learn a lot more about the past in the upcoming episodes.