The Shondes: Grrrl rock for the 21st century 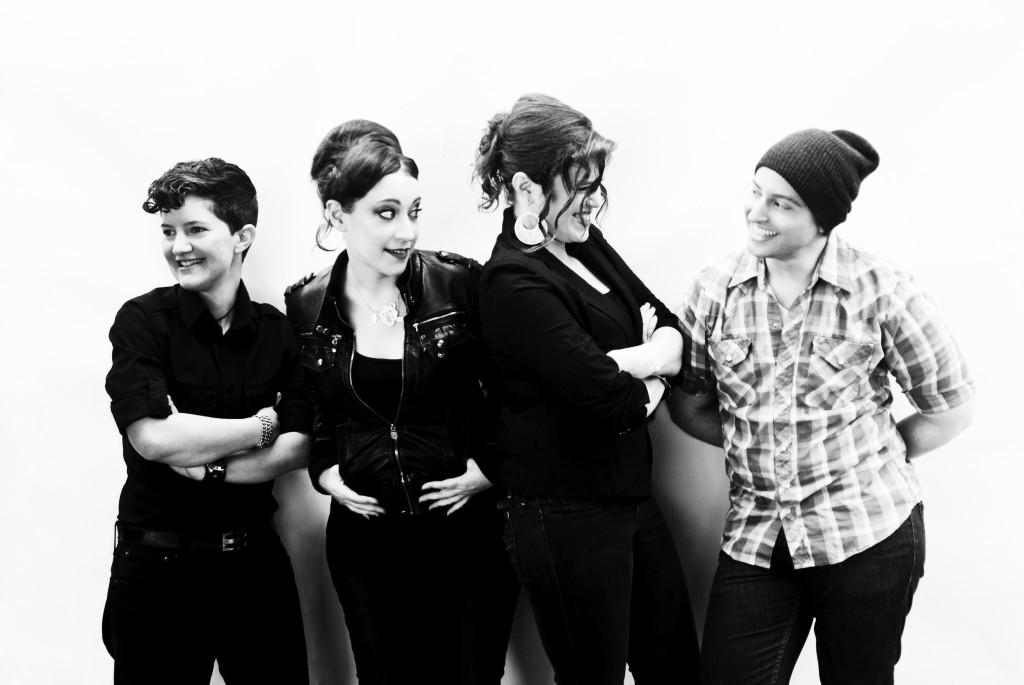 Ladies, ladies: you need a makeover.

Vogue tells you to be more professional and sophisticated, yet still be a flirt in and out of the office. Your mother tells you all that nail polish and eyeshadow has gone to your head, and is making you act like a ditz.

The Shondes would tell both of these modern-day stylists to get lost.

“I don’t want to be good anyway […] Go on, go on and talk. Say whatever you want. Call me a homewrecker, call me a monster […] I’ve got nothing to hide,” lead singer and bassist Louisa Rachel Solomon croons on the track “Give Me What You’ve Got.”  Their new album Searchlights was released by Exotic Fever Records in September of last year.

Of course you can’t have it all, and The Shondes get that. Their lyrics, backed by punk rock beats mixed with a violin’s melodic harmony, act tough and call out society, lovers, and enemies. Yet their ballads frequently lament their inability to get exactly what they want as people, and more specifically as women. Songs about traveling and becoming closer as friends, such as “Ocean to Ocean,” strike a chord with listeners universally, no matter what their background.

The Shondes are in the middle of a tour throughout the U.S. and will be stopping in Cleveland this coming week. The group, whose moniker means “disgrace” in Yiddish, come from Brooklyn, N.Y., where they formed in 2006. The band is made up of Solomon, Elijah Oberman playing violin, Temim Fruchter on drums, and Fureigh on guitar. These people are, as individuals, a living representation of women and men who have been influenced by our post-modern world. The band has already been through some hard times, most notably in 2011, when Oberman was diagnosed with and treated for cancer.

It has been a while since the alternative music scene has seen a strong showing of leading ladies making music and using developed lyrics as vehicles for equality and social change. More specifically, it hasn’t been since the late 1990s riot grrrl movement, supported by names such as Sleater Kinney and Bratmobile. While The Shondes have drawn comparisons to their predecessors, they are taking a very strong post-millennium approach.

Today, bands such as MEN, Lovers, and Screaming Females are taking the stage and elaborating on where their forerunners left off. Bands which in the past were seen as having only an active feminist agenda are now blurring the lines into queer and transgendered territory, showing how intertwined these categories of musicians normally are. The Shondes fit this bill, but they are also blurring genre lines with their folk-inspired tunes, making them comparable to other fringe punk acts such as World Inferno Friendship Society.

However, The Shondes are by no means trying to play by the rules of the box some critics have tried to put them into. “Pigeonholing can be a hard thing for bands to navigate, but […] we’d like our music to be the focus of press that comes out about us, and at the same time, we are always happy to talk about our stories as individuals, and about our histories and identities and beliefs — and about how all of that stuff plays into our music and our performance,” Fruchter told Halley Bondy of MTV Iggy in 2011.

The Shondes combine rock rifts with traditional Jewish music and have used their experiences as queer-activists, gay and transgendered musicians, and feminists to craft songs that are challenging both mentally and melodically. Above all, their sound is marked by a love of pop and strong female vocals. They fuse components that are highly recognizable (alt-90’s Nashville rock) with elements that are a little more coded (klezmer-inspired style). Standout tracks on the new album include “Searchlights,” “Worth Fighting For,” and “Coney Island Tonight.” You can expect about a 45-minute set infused with attitude and enthusiasm from them this Thursday night.

The group will be performing at the Beachland Ballroom and Tavern April 19 at 8:30 p.m. They will perform on the bar stage supported by local groups How To Breathe Underwater and Crave. Tickets are $6 at the door.