Streaming recommendation of the week 10/23/20 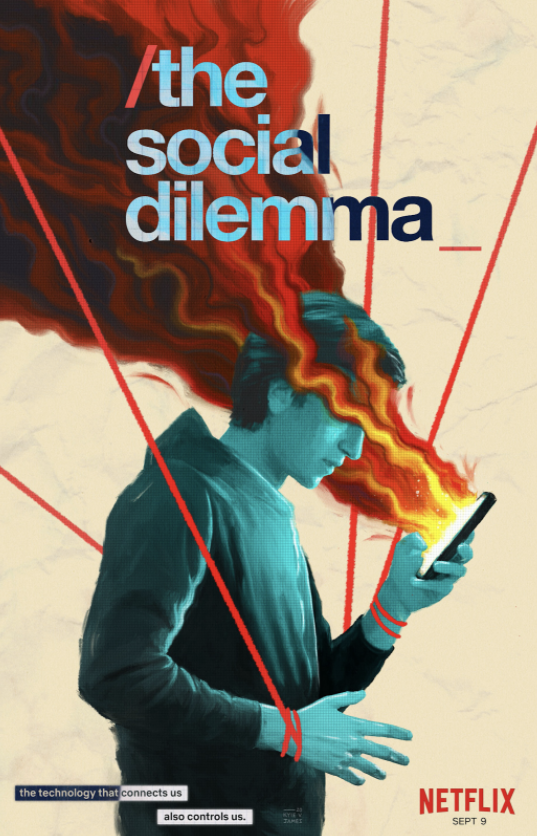 Netflix’s recent documentary, “The Social Dilemma,” highlights many of the problematic aspects of social media.

I don’t know about you all, but my screen time has ballooned since the pandemic started, with all my classes transitioning to online and my social life becoming a series of Zoom, Skype and Discord calls. Along with that, my usage of social media, from Instagram to Twitter to Reddit to Facebook to TikTok, has also risen commensurately. After all, what else is there to do in the day anymore?

While I’ve always been aware of some looming issues with social media—for example, the Facebook-Cambridge Analytica data scandal, revealing privacy shortcomings and the proliferation of fake news—I never really thought it was something I should be concerned about. After all, what data did I have to hide? What concern is fake news to me if I stick to sources I trust? Can’t I control my own screen time, too?

Netflix’s recent documentary, “The Social Dilemma,” directed by Jeff Orlowski, rebuts all those points and makes it very clear that we should all be concerned about the effect social media is having on our society. Through a series of interviews—including ones with the creator of the Facebook like button, Facebook’s former Director of Monetization, the creator of Google Drive and Google Sites, advocates for humane technology and academics specialized in the field—the film lays out the fundamental issues with the meteoric rise of social media around the world. All these former Silicon Valley types spend the movie going through how they regret some of the things they begot, creating an extremely powerful message. When the former CEO of Pinterest says that he wouldn’t let his own teenage children have social media, it makes you listen.

Ranging from issues of addiction and mental health, to financial exploitation through data mining and surveillance, to the rise of conspiracy theories and recruitment efforts from racists and terrorists, the film makes it abundantly clear that something needs to be done.

Though the issues posed by social media may seem abstract, the film simplifies and illustrates the impact it has on all of us, making it easy enough for your grandparents to understand. The direct implications of all the issues—including genocides happening around the world due to misinformation, for instance—show exactly how social media hacks our brain and how our democracy will fail if we continue down this path.

It may be hard to visualize how algorithms create models of our individual behavior using our own data and then sell us to advertisers, or the ways social media facilitates political polarization, so the film uses dramatizations of a plausible story to show exactly the effects social media might have. And this is the portion of the film that might be too on the nose. While I appreciate the message by showing how a normal family can be impacted by biased news sources, unhealthy beauty standards or cell phone addiction, it can feel a bit overdramatic at times, distracting from the true meat of the film—the interviews. While I can see why having an anthropomorphized social media algorithm may be useful for those who have no conception of how things in our feed are shown to us, it comes off as contrived.

Regardless, the film makes a consistent argument throughout: Social media is bad for you and our society, and the best thing we can do until Silicon Valley companies change is to limit our time on them. There is no real solution, but unless we all want to be products of a corporate surveillance state that no longer has any functional definition of truth, there is not much else we can do. While social media and technology today can’t really be removed from our lives, especially during this pandemic, where digital connection is more important than ever, “The Social Dilemma” argues that we owe it to ourselves and our communities to use social media more responsibly, especially when the companies in control have no incentive to manage it more carefully. Perhaps we should all listen.