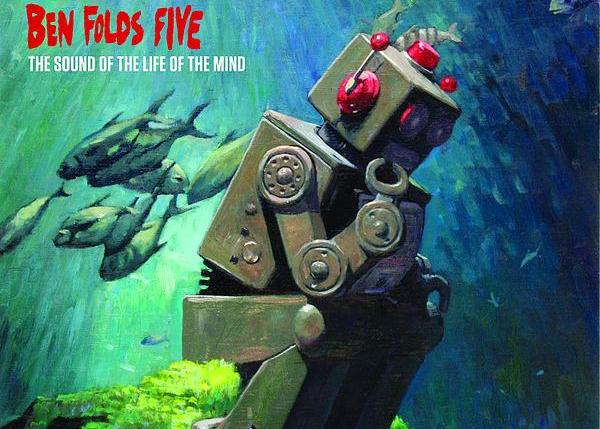 Before their split in 1999, piano rockers Ben Folds Five produced three albums of songs about lives spent wandering around just outside the 1990s mainstream. Even after reaching chart success with Brick, the BFF’s best songs continued to balance their alternative rock whims with quirky characters and lyrics that juxtapose profane cynicism with upbeat melodies. After reuniting for three new tracks last year, Ben Folds Five –actually a trio with Folds on piano, Robert Sledge on bass and Darren Jessee on drums– have reunited for The Sound of the Life of the Mind, their first new album this century.

But while Folds’ lyrics are sharp as ever, the songs are slower than before, and less memorable. Ben Folds Five are older, wiser, and just as refreshingly bitter as always, but it takes several listens to fully warm up to this new, slower sound that lacks the tightness and focus of their peak.
Highlights include the title track about a girl who retreats into her studies of “Rosa Parks and DNA, Joan of Arc and JFK” to escape the societal excess and cultural stupidity that surround her. The title track –with a leftover lyric from Folds’ solo collaboration with author Nick Hornby – works as it subtly questions the roles of Keats, Frost, and Lincoln in a world where Bieber, Snooki, and Minaj are idolized. Mind also presents the finest name drop of Studs Terkel in the history of pop music.

The best Ben Folds songs are just mainstream enough to show your mother but with enough faint subversion to keep things interesting the next time you play the track. Do It Anyway is frenetic in a way that no other track on the album is, able to replicate with a killer piano intro that hasn’t been seen from the three since 1992. Sledge’s bass lines and Jessee’s killer drum fills have been sorely missed over the last ten years, even if they have been forced to slow down.  Unfortunately, tracks like Jessee’s contribution to the album, Sky High, and Michael Praytor, Five Years Later lag at times, even with the latter’s harmonies in the style of one of Brian Wilson’s songs for The Beach Boys.

Ben Folds Five are different now and that is to be expected. The last thirteen years have done a lot in maturing their sound, but lyrically Folds remains at the top of his game and still knows when to have some fun: the album cover features a robot underwater posing as Rodin’s The Thinker.And as a washed-up singer character in Draw a Crowd, Folds describes internet shopping and sings that “if you’re feeling small and you can’t draw a crowd, draw dicks on the wall.” How good it feels to have the old band back together.